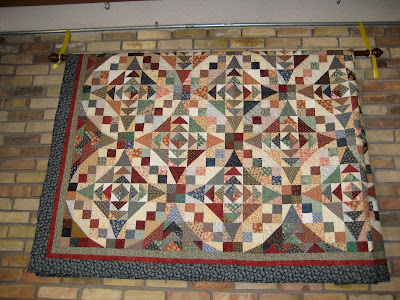 Hey folks, remember this quilt? I have had so many people ask about the EYE FOOLER pattern after I posted about it. Nothing comes up in a google search, but I just bought it a year ago, so I didn't think it would be out of print that soon. I just called the shop where I bought it and they say it is a local woman who developed the pattern. They order a couple of dozen of them at a time and yes, it is still being produced, just not marketed online. Can you believe such things still exist? Anyway, the nice man at THE STITCHING CORNER in Orem, UT said you can call them at 801-426-6900. You can order it over the phone with a credit card (that is actually how I bought mine last year) for $8.98 plus shipping. They also carry the Tri/Recs rulers, which are needed to make the quilt, if you want to order them together (the rulers are $13.98 plus shipping).
So the mystery is solved. If you want this pattern, give them a call. As I said before, I am doing mine as my current leader/ender project and it is coming along nicely.

ETA: A couple of hours after posting this I heard from the designer of the Eye Fooler pattern (as some of you probably already have). Good news is that you can order directly from her. She said you can get the pattern if you send a check for $9.00 to her at ...

Thank you for the info about the Eye Fooler quilt pattern - I sent my money off to Krisanne the designer right away! I also love the quilt that is featured in your banner at the top of the page. That is really stunning - is that pattern available somewhere? Thanks (a new follower in Washington state) :D

great quilt!!!! OH I just may have to make this one too!!!!
thanks for getting all the info for us.
Kathie

What a gorgeous quilt!

Beautiful Quilt - I might make it small and square with just four blocks.
Thanks for sharing and the research!