Just little things going on here. The 2 1/2 inch ruler is there again to give you perspective. 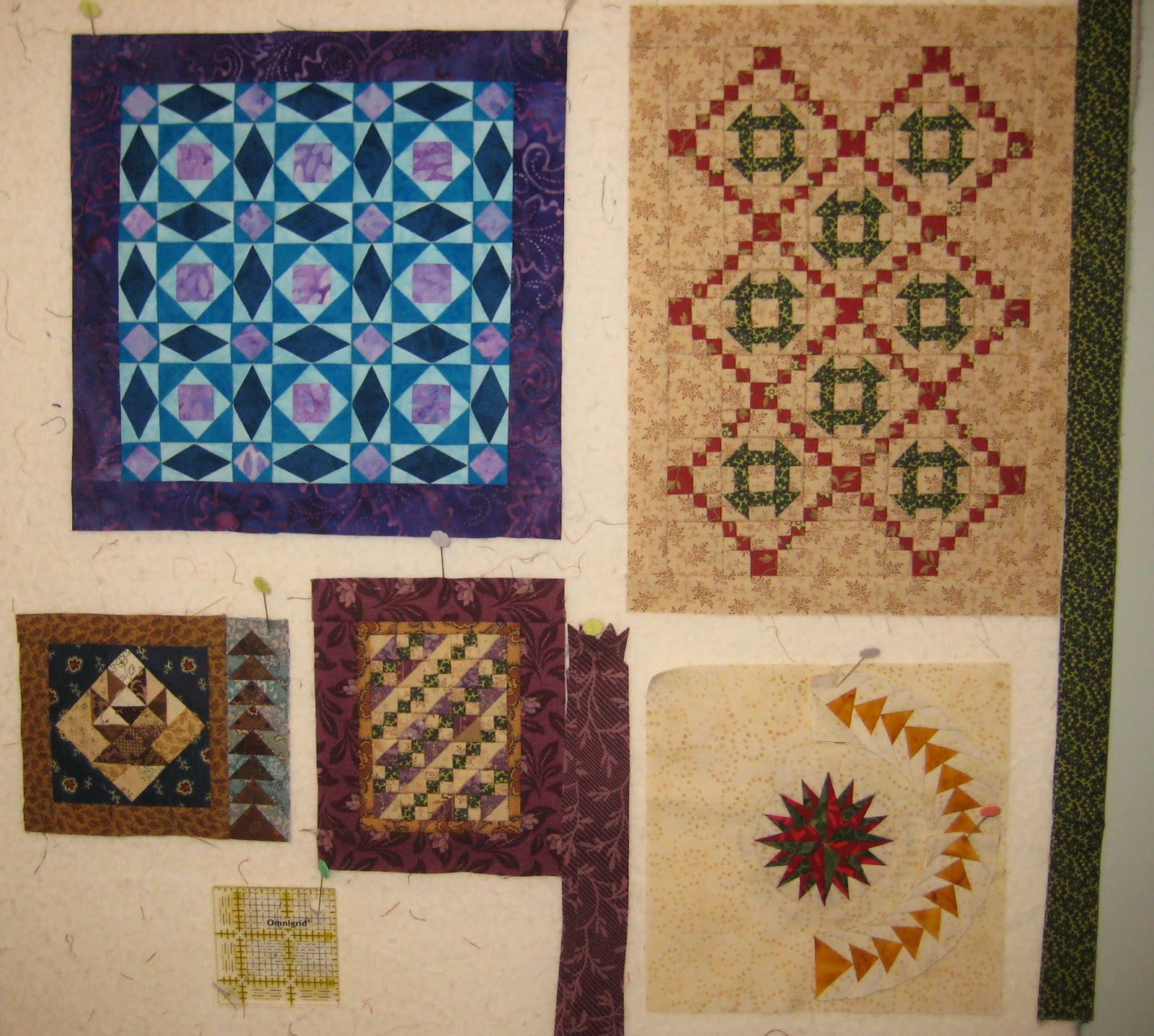 Storm at Sea Just needs quilting, and so does the Churn Dash and Chains. It will be bound in the green that is dangling beside it.
I decided to do a little medallion quilt from a leftover basket. I am surrounding it with flying geese. Only one side done so far.
Some leftover little green strips from the Churn Dash and Chains became little 4-Patch blocks in the tiny Stairway to Heaven.
And the Mariners Compass is getting surrounded with circling geese. I have a plan of another round after that. We'll see if I can get the circle of geese to work first.

I have two more minis I want to get made before the trunk show and then it will be a mini quilting marathon here!!

Thanks to a couple of good friends, I am well supplied with material for my mini trunk show. Look what arrived in my mail this past week! These are such treasures, and you can see I have marked just a few patterns to try. : ) 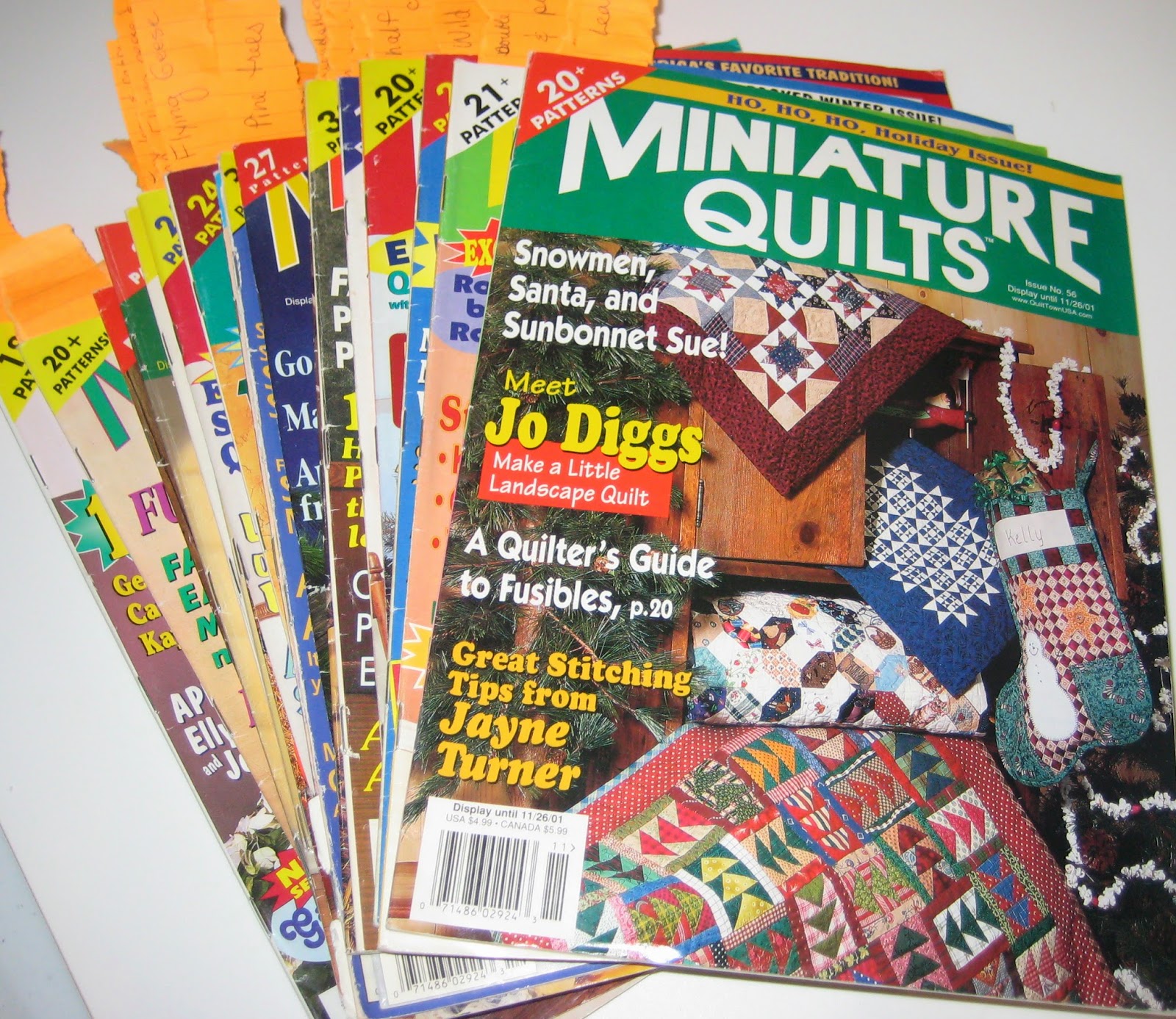 Many thanks to Denise and Carole!!!

Have I mentioned that my two 20-something sons had gone to Iceland with a few friends over Spring Break? This is what came home with them for me. 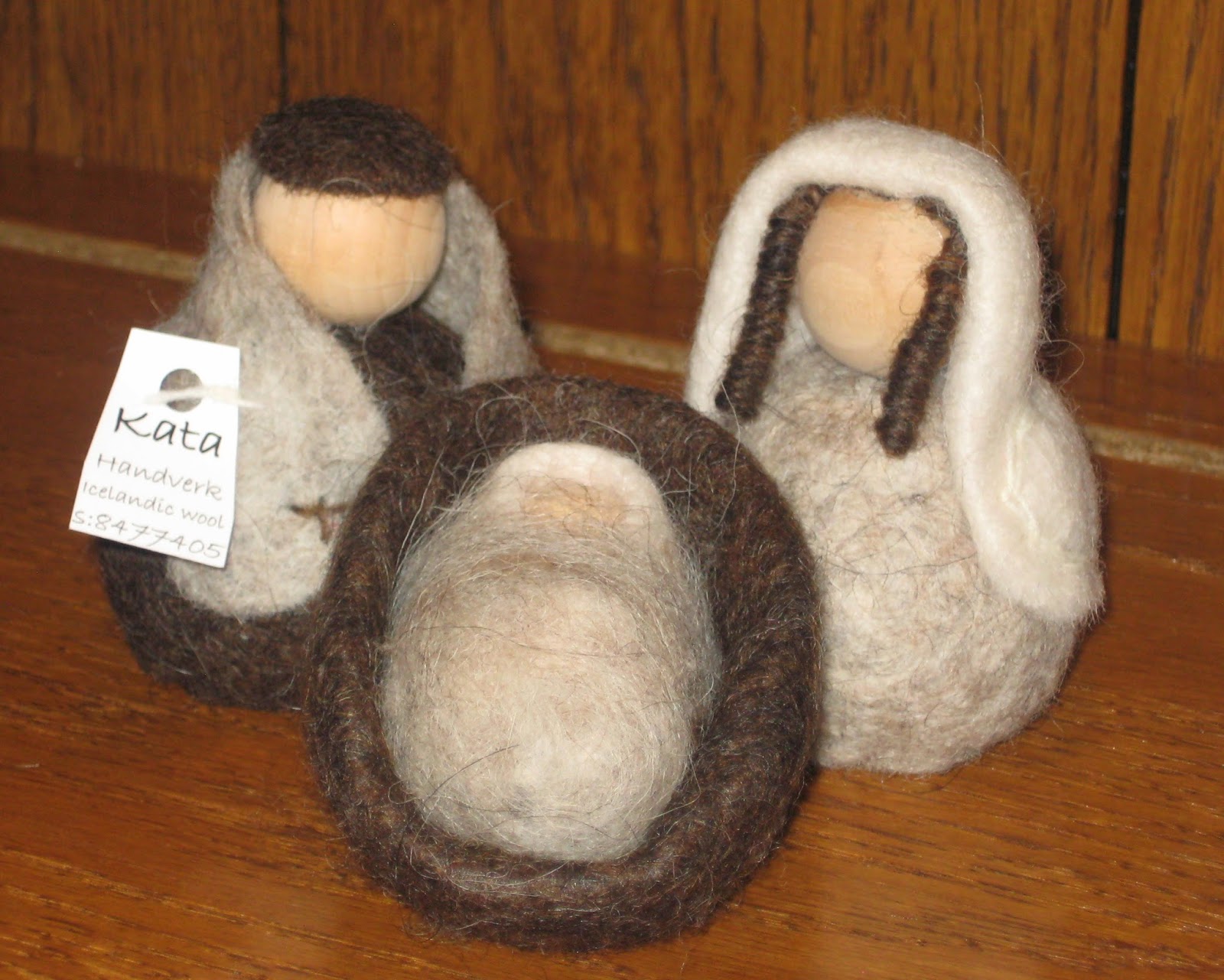 A sweet little Nativity made from Icelandic wool--don't you think it needs its own little wool mat with some stars stitched around the edge?
And then there is this guilty pleasure. 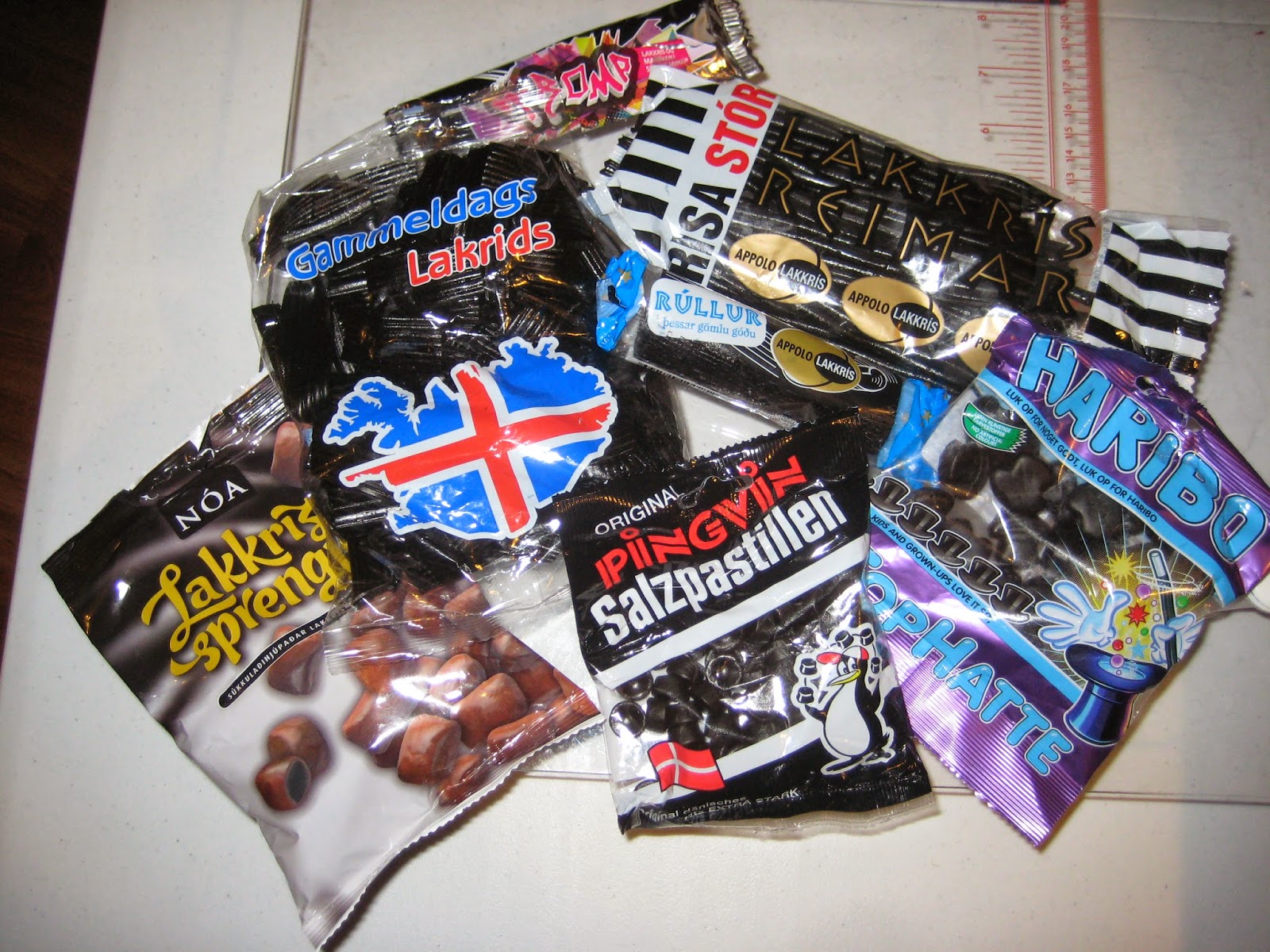 Apparently black licorice is a favorite treat in Iceland--and I am the beneficiary. I can't read the labels but it all tastes good!
My sons know their Mama! : )

Like everyone else, we are having very fickle weather. After a snowstorm that melted quickly in the valley, but blanketed the mountains, I caught this shot. If you look carefully you can see my BIL's two donkeys and the llama. 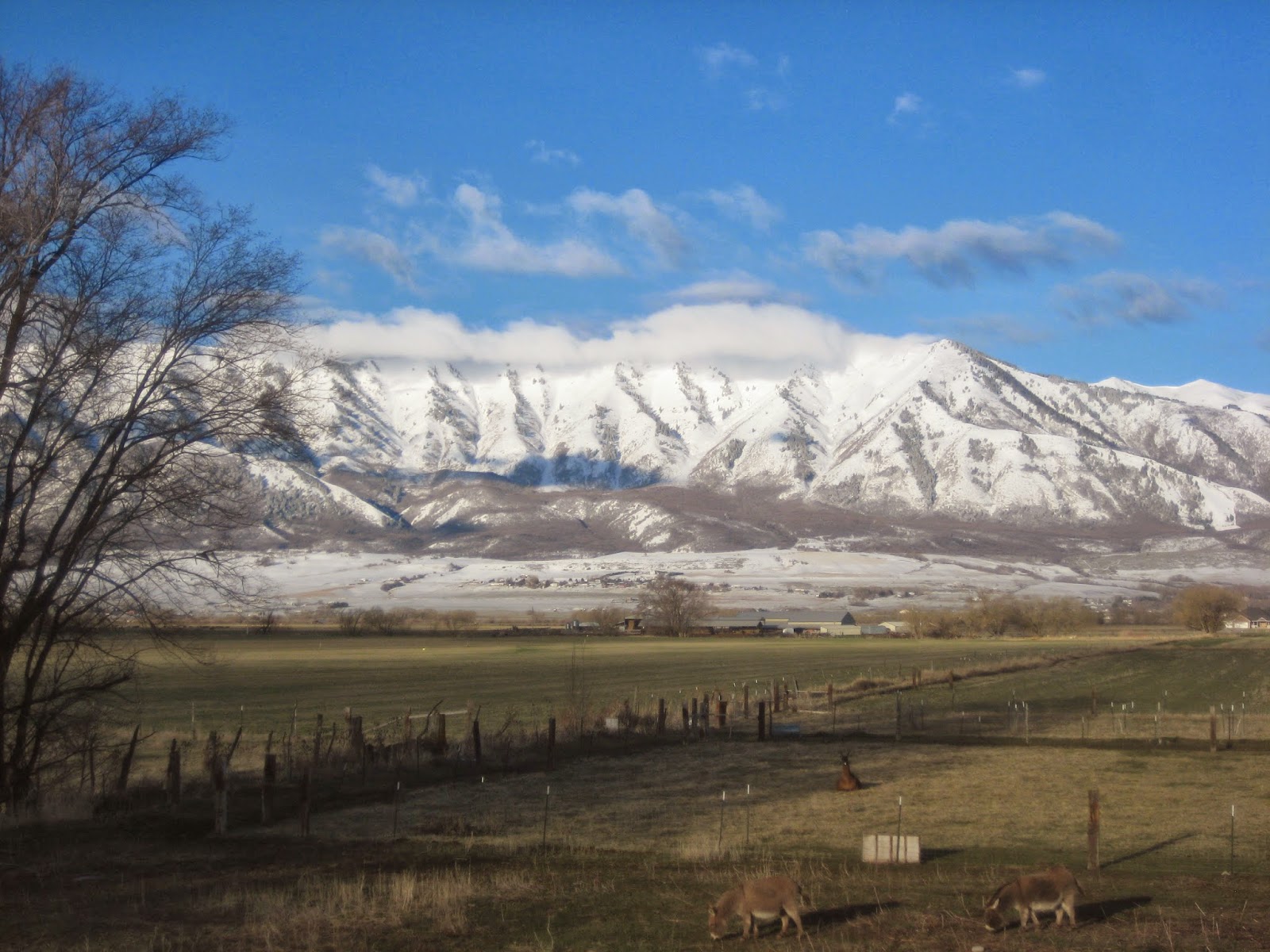 Now that my version of Orca Bay is bordered, the next UFO on my design wall is this set of star blocks. This was one of the free block patterns I picked up on my first shop hop years ago. I made the blocks entirely from scraps and remnants. There are no fabric repeats in the center squares. 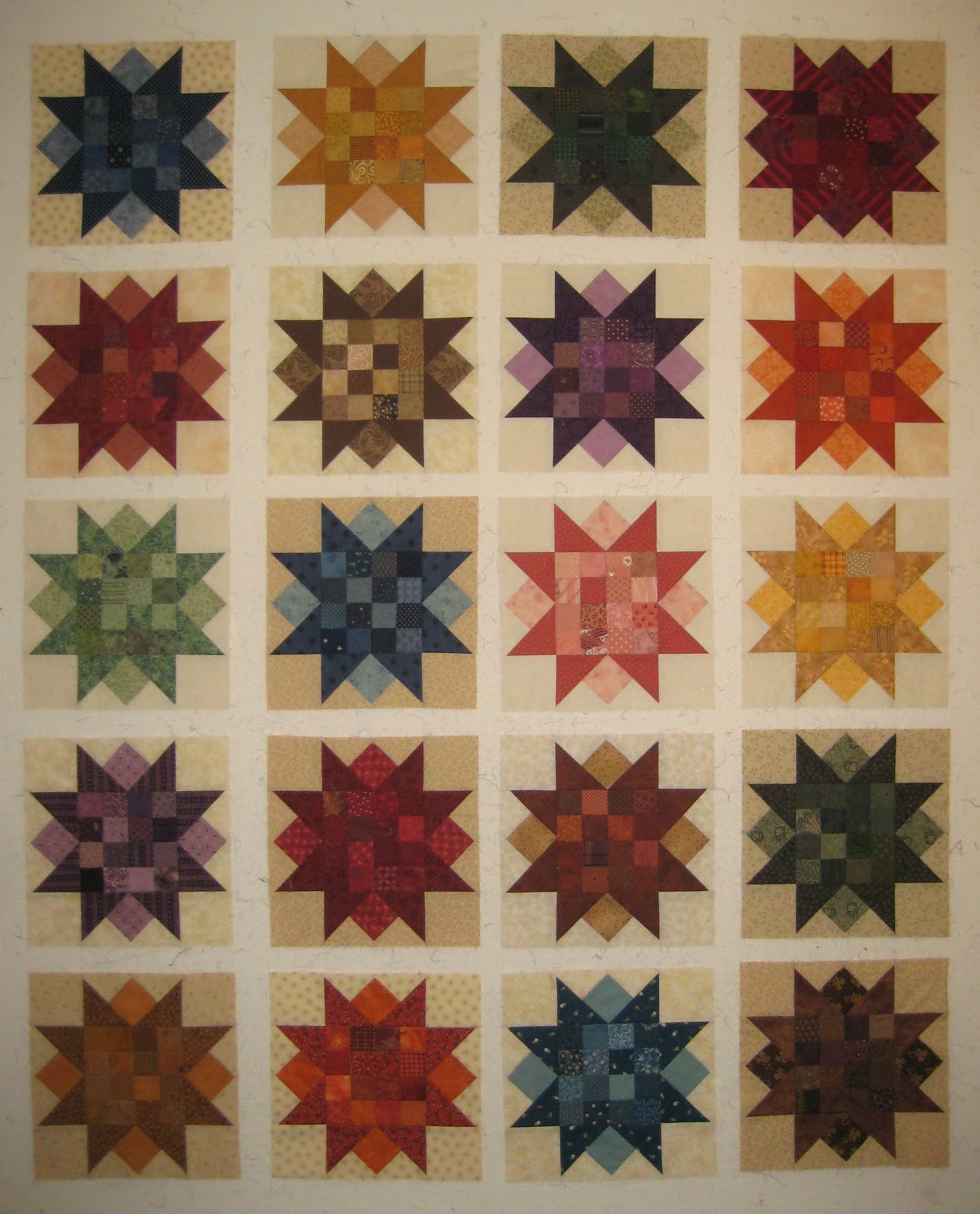 These blocks have been kicking around the closet for a few years. Time to get them put together. I'm thinking about a Garden Maze setting.

I have been playing with some mini quilt ideas. The Storm at Sea is 8" square and was foundation pieced. I plan to border this one. With all of the seams so close together, I pressed them open, forgetting that I had planned to SITD. Now I don't know how to quilt it. Any ideas? 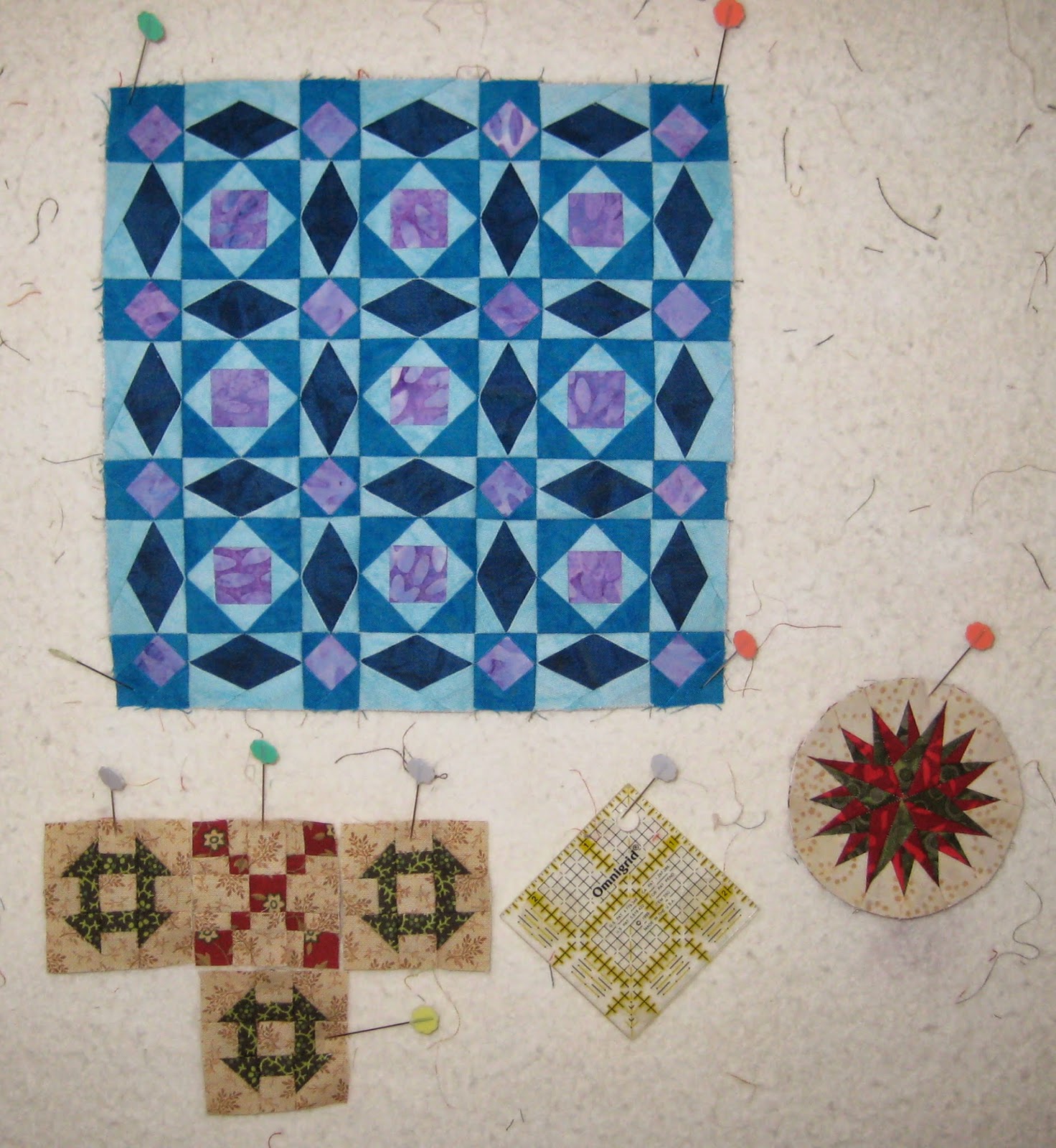 The Churn Dash & Chains blocks will finish at 1 1/2".  I'll be making more of both blocks. They are not foundation pieced, so they look a little wonky. The Mariner's Compass is just over 3". Haven't decided if I will be making more of those. (I pinned that 2 1/2" square ruler on the design wall to give you some size perspective on these little things.)

I'm afraid that until this trunk show has come and gone, I will be consumed with mini making. At least it may make for some shorter posts. : )


This is Bonnie Hunter's Smoky Mountain Stars free pattern, which I made entirely from men's shirts and named Rocky Mountain Christmas. Last time this was on my wall (years ago) I was struggling with whether or not to use the bonus triangles the stars created to make a sawtooth border. 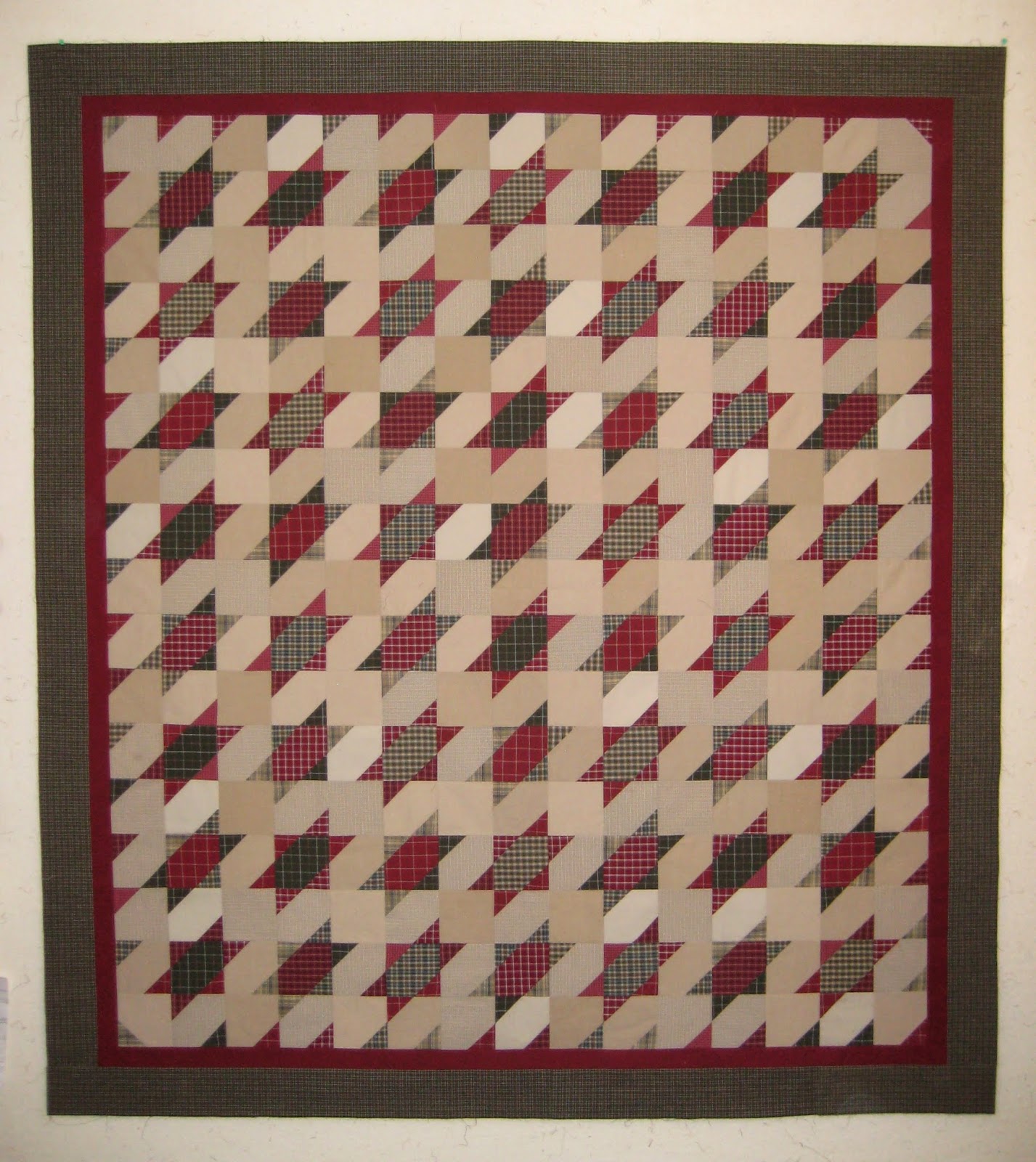 I finally decided it was too busy and distracted from the simplicity of the stars, but I put it away without attaching the borders that were already cut. How lame is that? Now it is bordered and we are both happy!

Currently on the design wall is another Bonnie Hunter pattern--her mystery from about 3 years ago--Orca Bay. It only needs the final border pieced and attached. 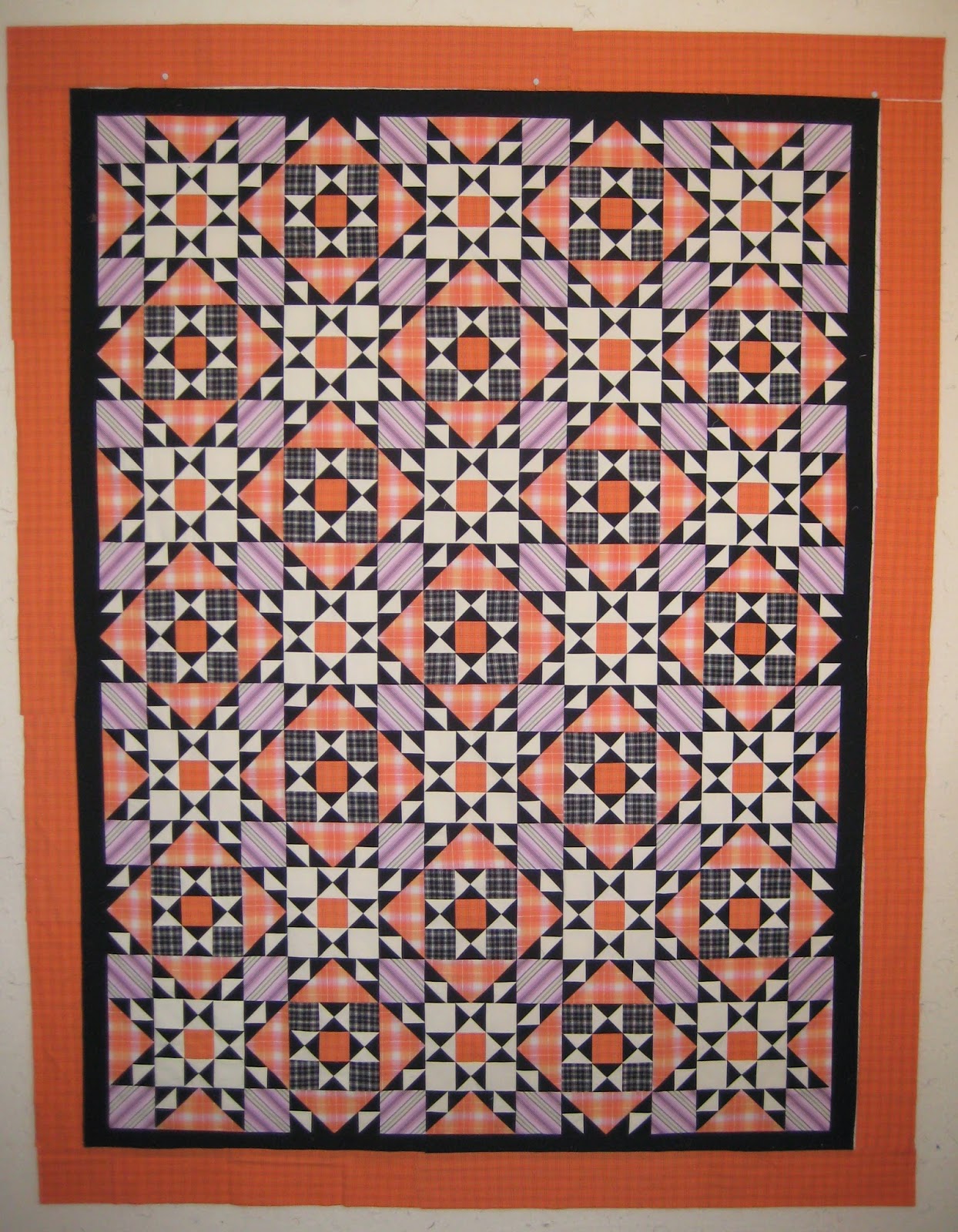 I made this one entirely from men's shirts, as well. I had planned to name it Sunset over the Rockies (Yes, I love my Rocky Mountains), but ended up going with Sunset over the Men's Department, instead. Bonnie's borders are always piecing masterpieces, but I run out of energy by the time I get to the border--and I like some calm areas for the eyes to rest, so I just used straight borders. If you enlarge the photo you can probably see that there is a small plaid design to the orange border. I had to fussy cut it so that the stripes of the plaid would match when I sew the pieces together (yes, I HAD to do that!!). Good thing it was a very large shirt! 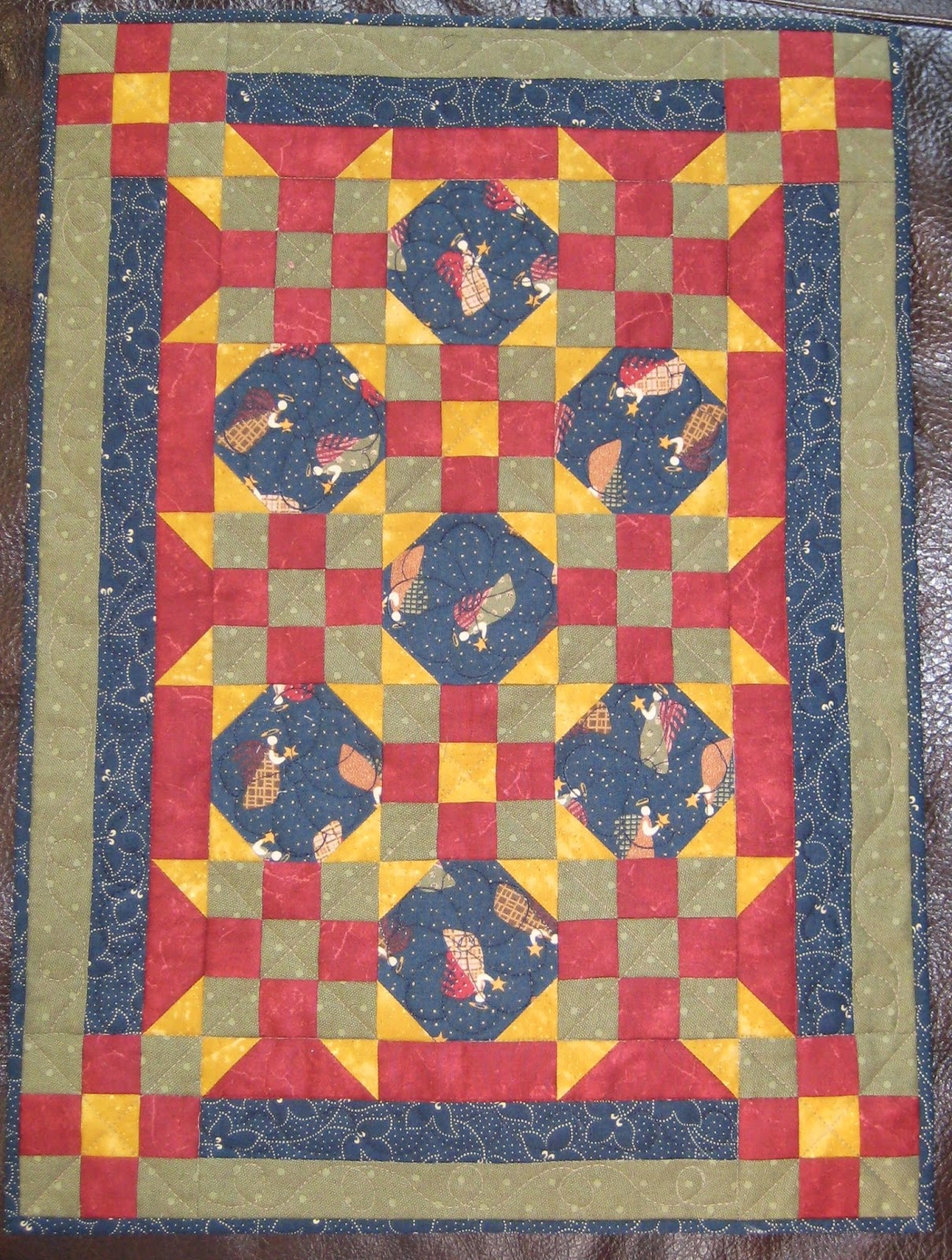 Of course, there is still the small stuff happening. This is the piece I mentioned in my last post that I was going to quilt with an all-over design. It didn't happen. I had every intention, but I just couldn't do it. Those 9-patches were crying out for straight lines criss-crossing through them, and those snowball blocks wanted their own design. So "Herald Angels", a flimsy from 2012, got custom quilting, in spite of my plans. 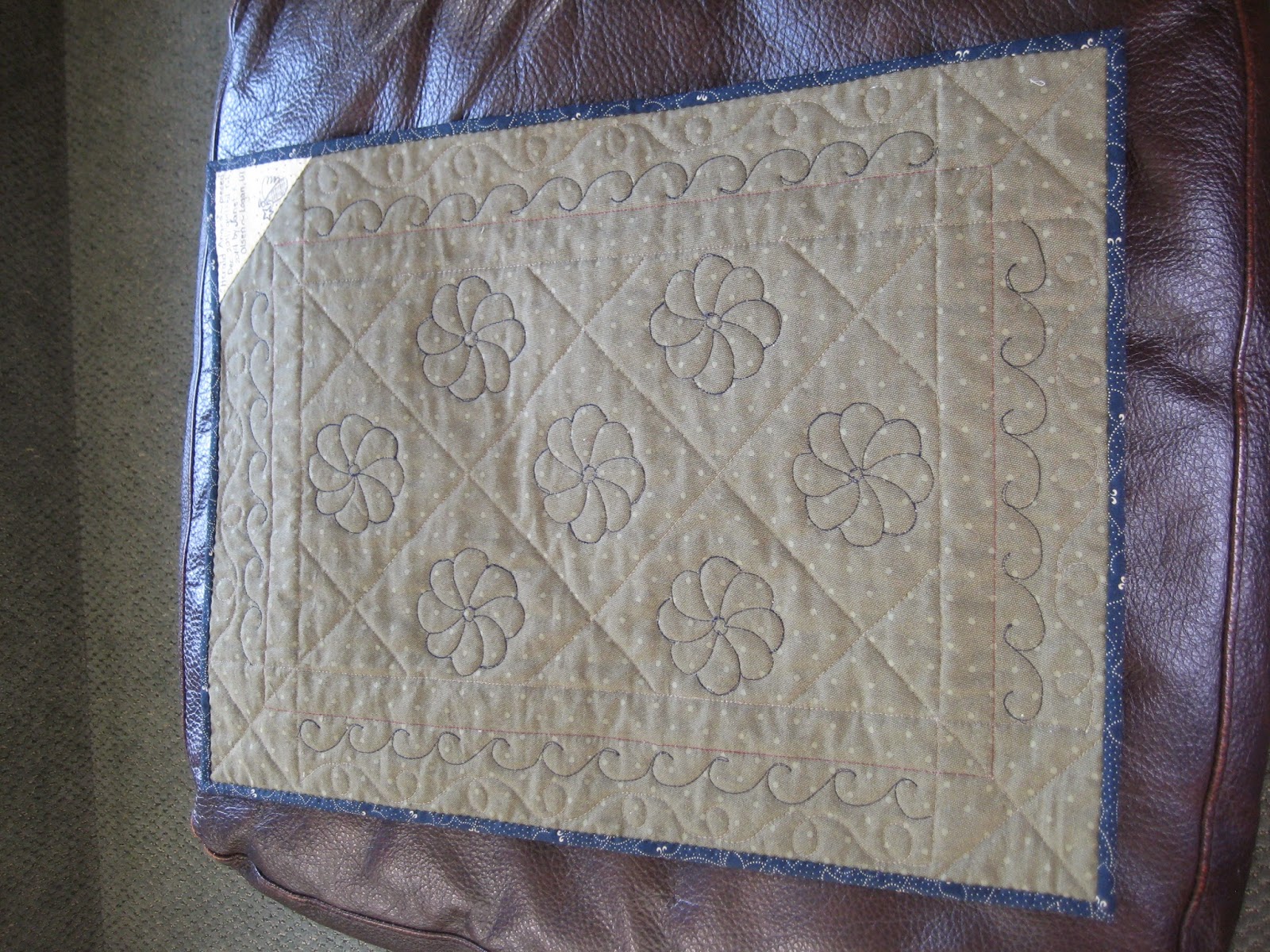 My pictures usually load straight, but this one wouldn't. You can click on it to see the quilting, and just ignore the thread nests and toe-catchers. I was trying straight line quilting using rulers on Gidget, instead of my walking foot on my Pfaff. It was a new experience--one I will try again, but selectively.

That is it for the UFOs this post. Now for the new stuff.

A few months ago, on Diane's blog I saw the cutest little quilt for a cat lover. She gave the link and I ordered it immediately, thinking I would make it for my Mother's birthday in February. But time got away from me and that didn't happen. I consoled myself that there was Mother's Day in a few months and I could shoot for that. When I started this little thing last week I could not stop.
The pattern called for just a little knot for each eye and a knot for the nose. I had to add a little more detail to the face and ears. I finished the binding last night, and I couldn't wait until Mother's Day. I dropped it by my Mom's today. She was so surprised, and really loved it. She has been a quilter for about half a century, and is a cat lover, so it was ideal for her.
It is paper pieced, and I used all scraps from my Mom's quilts to make it, except the cat fur fabric (thanks, Annie). I machine quilted the border, and SITD, but hand quilted the cross-hatching in the background.

Somehow I got talked into doing a trunk show for a local "Small & Miniature Quilts" guild. Do you all have a friend or two to whom you just can't say "No"? My reaction was, "What, me? Who am I to do a show, and I don't keep most of what I make, anyway, so what would I show?"
Somehow my protests didn't work, so now I am scrambling to make some of those miniature quilts that keep dancing in my head. Luckily, the show isn't until May!
This little basket quilt is waiting for feathers in the setting triangles. You can faintly see the white line I have drawn to keep my feathers out of the binding zone. I have done SITD around the baskets and blocks. I am trying to decide whether or not to quilt on the wavy line through the sashing with a matching thread.

Another Rocky Mountain photo for you. On my morning walk a few days ago the clouds were dark and the mountains were white. The wind was whipping at the peaks and you could see the snow whirling in the air against the dark backdrop. Enlarge the photo for a better look. 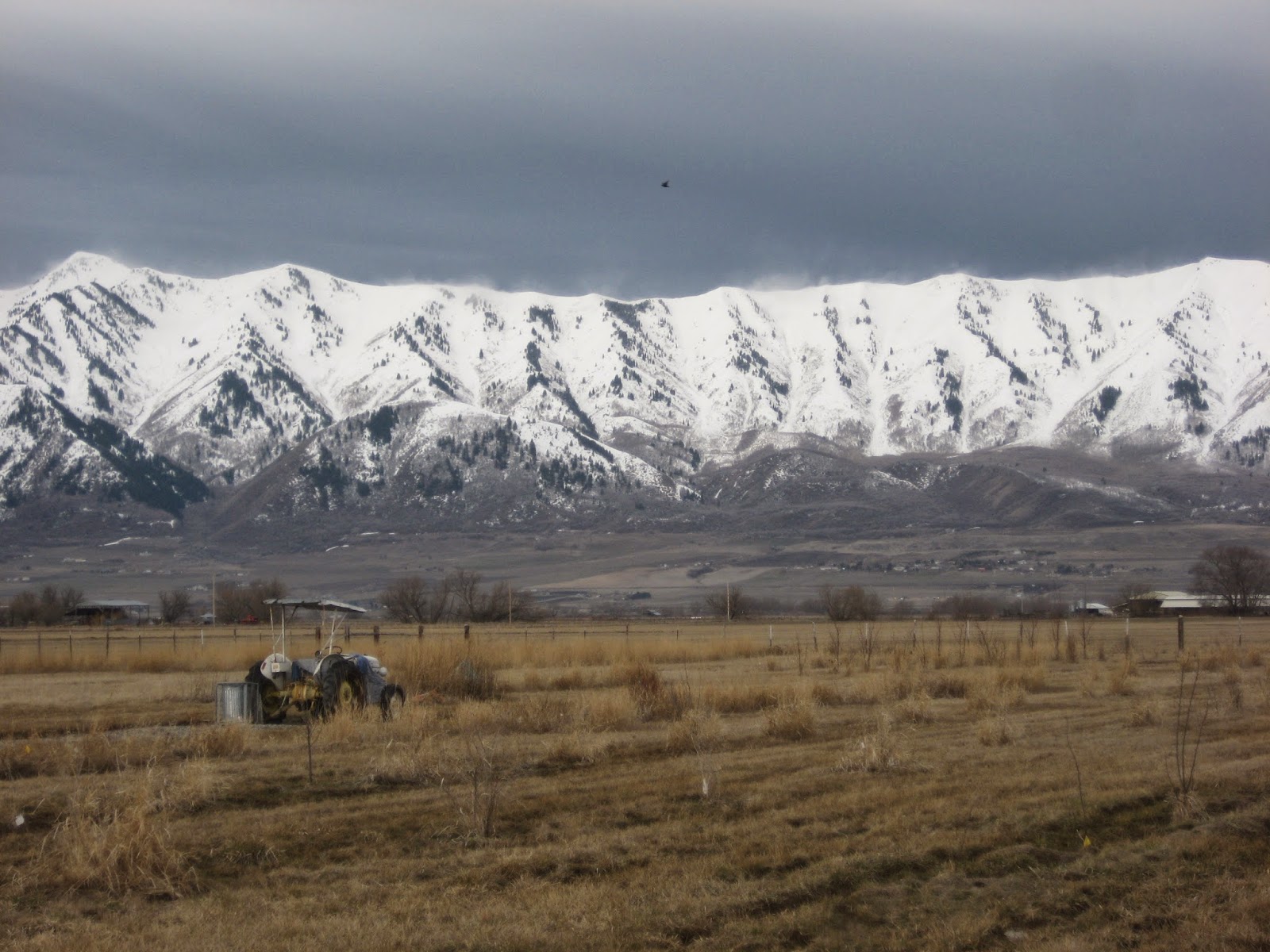 I know we have had enough of winter, but I love nature cloaked in white.
Until next time,
Janet O.