Just wanted a place to keep track of all of the mini quilt block ornaments I have been making the past couple of years. This is more for my benefit than yours. Unfortunately (for me, not you--this will be very photo laden), I don't have photos of all of them, but I want to document what I have before it gets to be too big a project to manage.

In April of 2012 I was working on a very “make do” wall hanging size basket quilt from a bag of my Mom’s quilt scraps. Many of my projects are “make it up as you go along” kind of things, so they aren’t planned out well in advance. I was to the point of putting borders on this basket quilt when I discovered that none of the scraps left in the bag were big enough to make a complete border. I posted my dilemma on my blog and asked for opinions as to which color from the scraps I should use for cornerstones, since I couldn’t do a complete border. 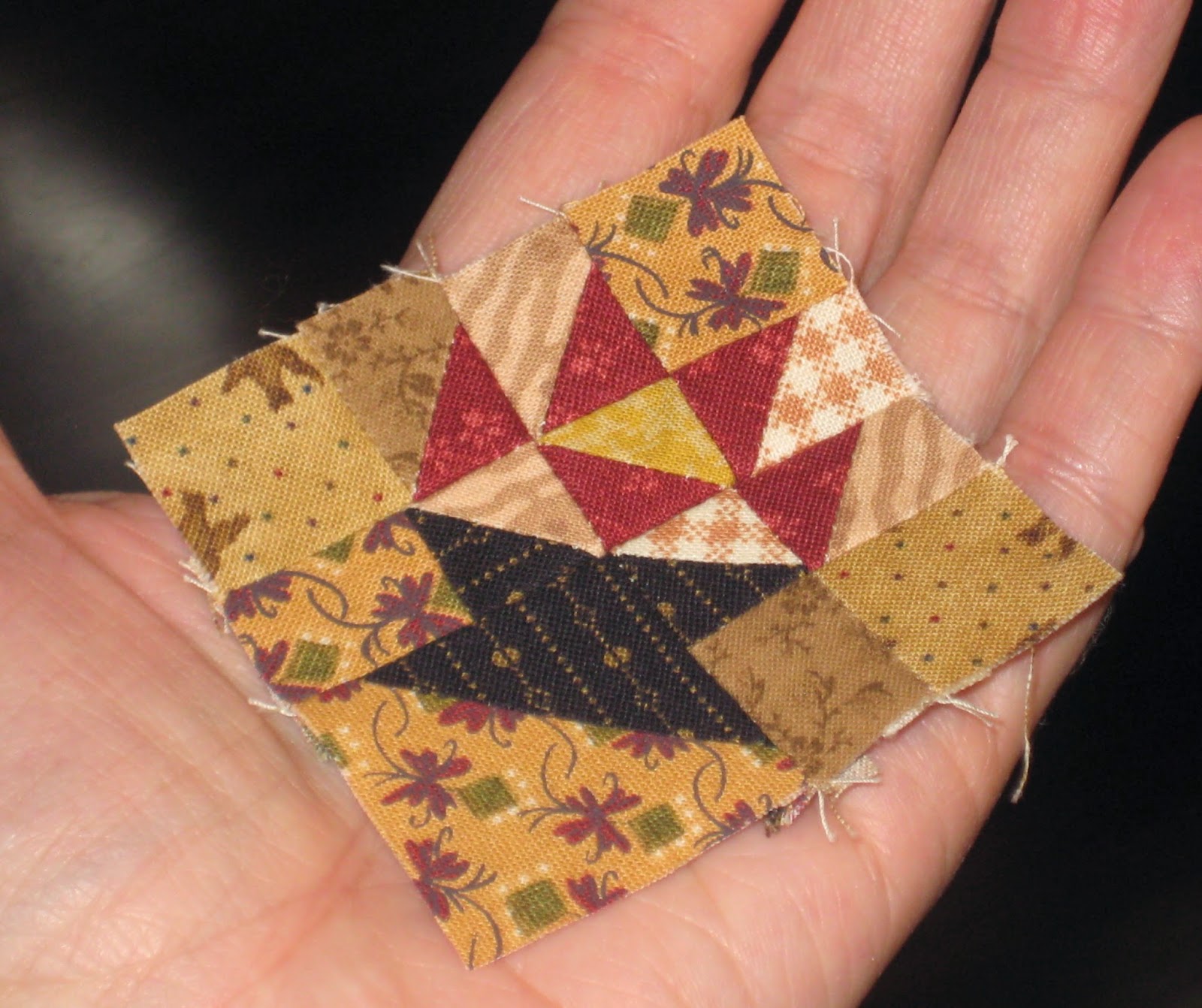 The first comment on that post (from Carol of Brown Quilts blog) challenged me to make 2” basket blocks to fill the corners. At first I laughed. Two inch baskets? Yeah, right! But the more I thought about it, the more I wondered if I really could. I had to try it—and it worked. I had so much fun, instead of just the four I needed, I made six. I didn’t know what to do with the two extras, but eventually I bordered, backed and stuffed them, and added a hanging loop. They were gifted away, but I liked the idea and thought one day I would make more. 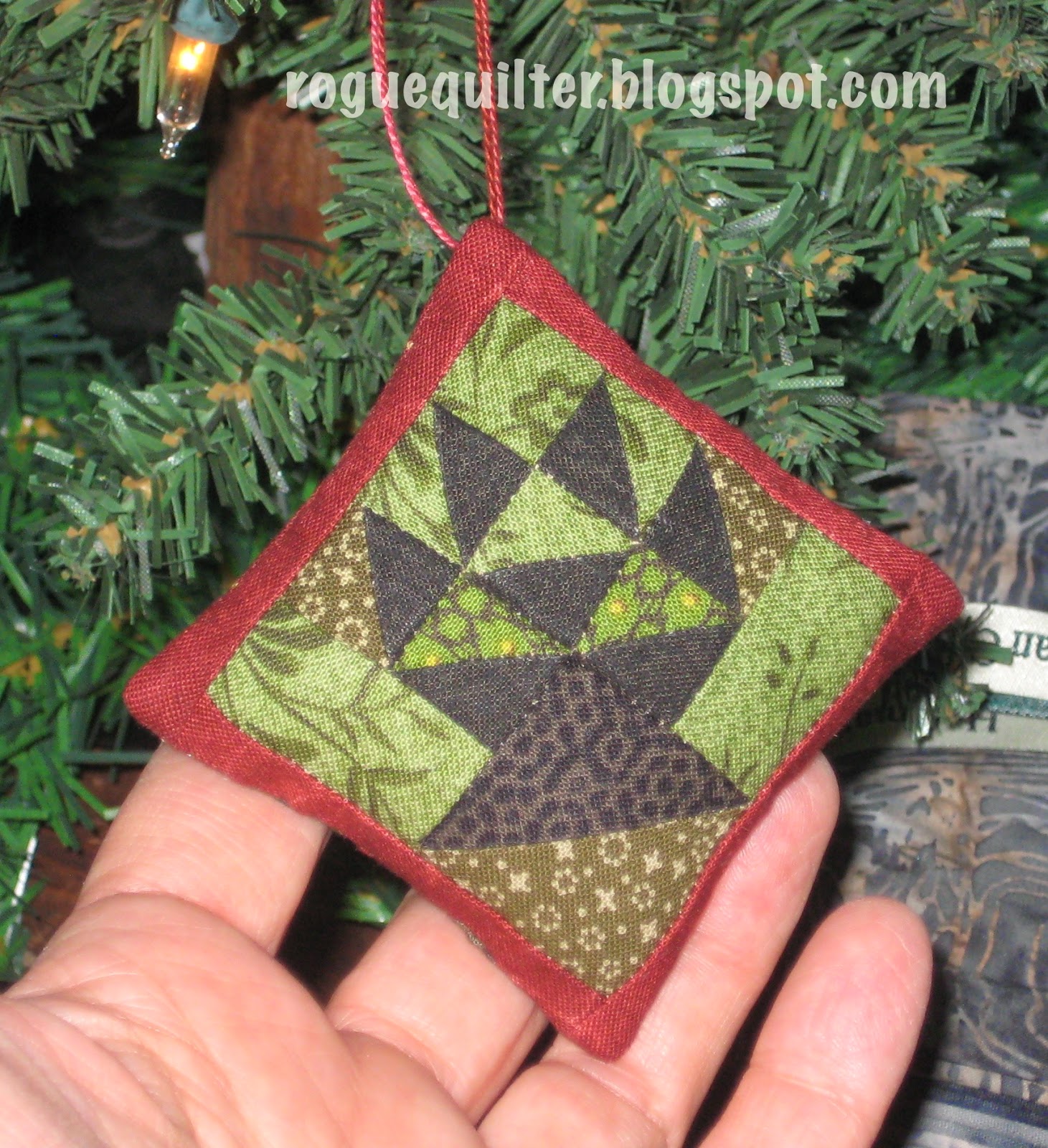 Just using leftover parts from other projects, one day I decided to try little baskets in Christmas colors. These were also gifted. 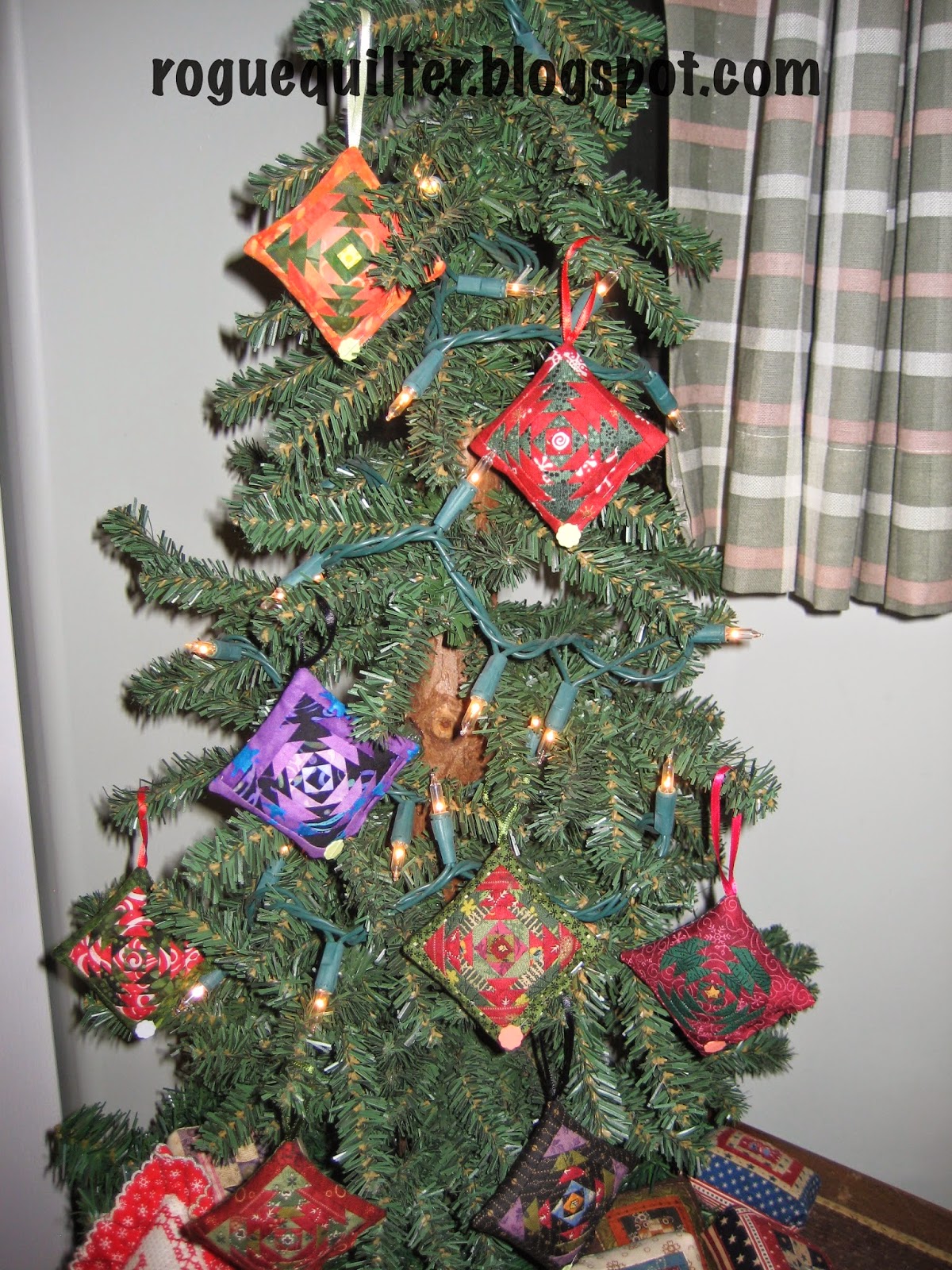 About this time I was also dipping my toe into the frigid waters of foundation paper piecing. I had not been a fan in my earlier attempts, but posts on two blogs (Quilt and a Prayer, and Into the Emerald Woods) of their 4" pineapple blocks had me captivated. I wanted to try them in 2" size and I knew I would have to paper piece to make that happen.

After my first attempt stressed at the seams when I removed the paper, I turned it into a pincushion and tried again on the ornament idea with thinner paper. The photo here shows my results that Christmas of 2012. You may notice the clover head pins in the bottoms of the ornies. I hadn't sewn them shut yet, but was so excited to get a photo of them that I didn't wait. Love those little pineapples!

These were all gifted that Christmas. 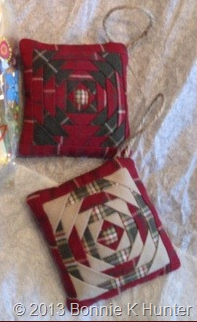 I was heavily influenced in my blogging (hers was the first quilt blog I found), leader/ender sewing, and quilting with shirts, by Bonnie Hunter. I decided to gift her a couple of ornaments made from plaid shirt scraps for her birthday in Jan. 2013. I didn't get a photo before mailing them, so I swiped this one from Bonnie's blog.


Also in January 2013 I was attending a day long class taught by Lisa Bongean, and I thought it would be fun to take her a few ornaments made from her fabrics. In an attempt to make them appear a little more primitive, I used jute to make the hangers. 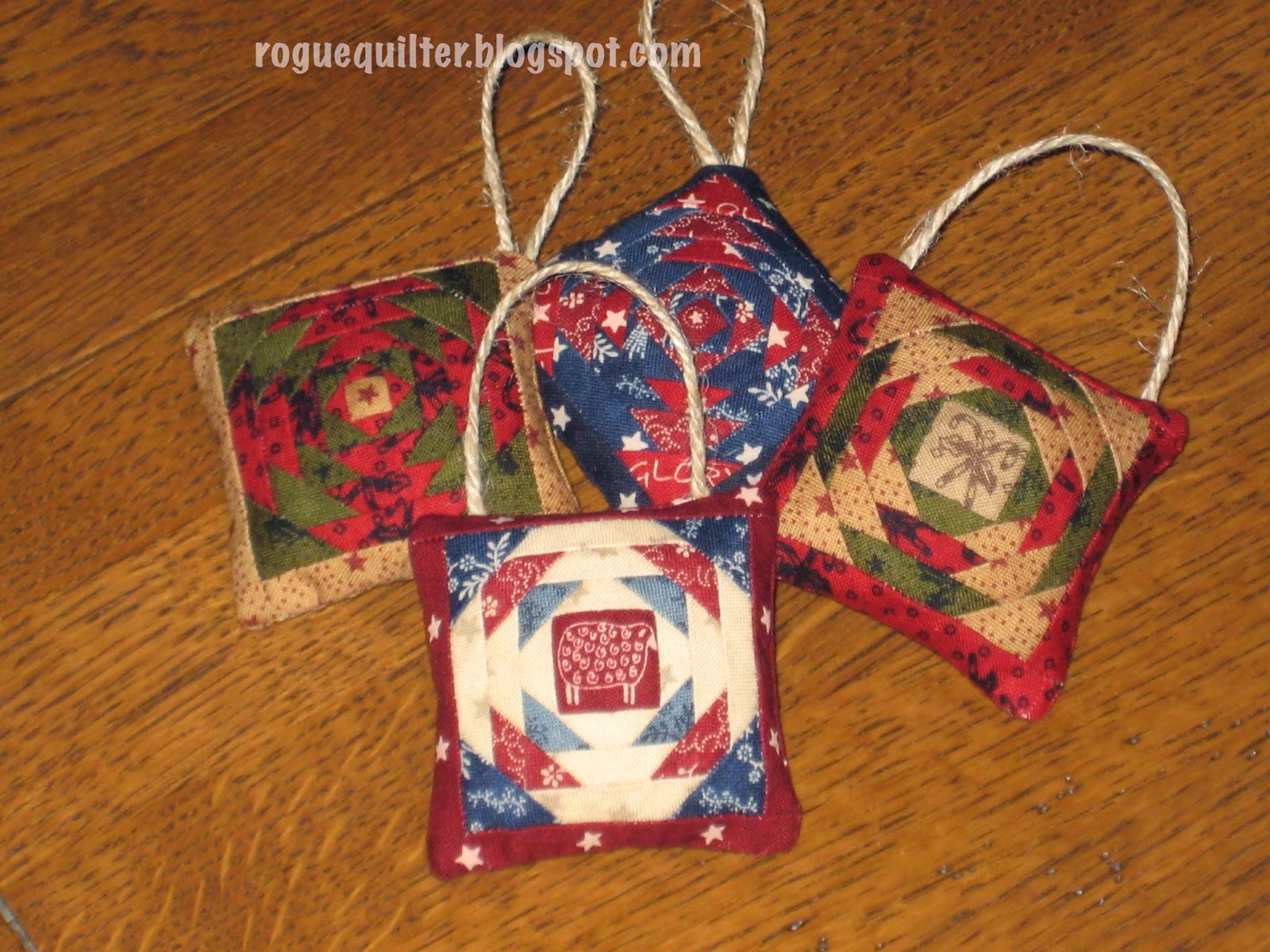 Everything else I had made up to now had been hung on point, but to hang a couple of the fussy-cut centers properly, I had to hang two of them straight.


My Mom had received one of the little ornaments I had made for Christmas. She was so thrilled that I used some of the scraps she gives me from the quilts she makes and created an ornament to represent each of the quilts for which I still had scraps. These were gifted to her in February of 2013, for her birthday. I couldn't hold them until that year's Christmas. I have never claimed to be a patient person.

These were a big hit and she left them on a tiny tree in her living room all year, until she put up her Christmas tree, and then they were hung upon it.

She still displays them in her living room all year, just not on a tree (and not on the piano book rack, either. This is just where she had them when I took the photo).

Throughout the next few months I made several more pineapple ornaments and gifted them or used them in swaps with other bloggers. This photo is a little blurry, but these were some I made for those purposes. 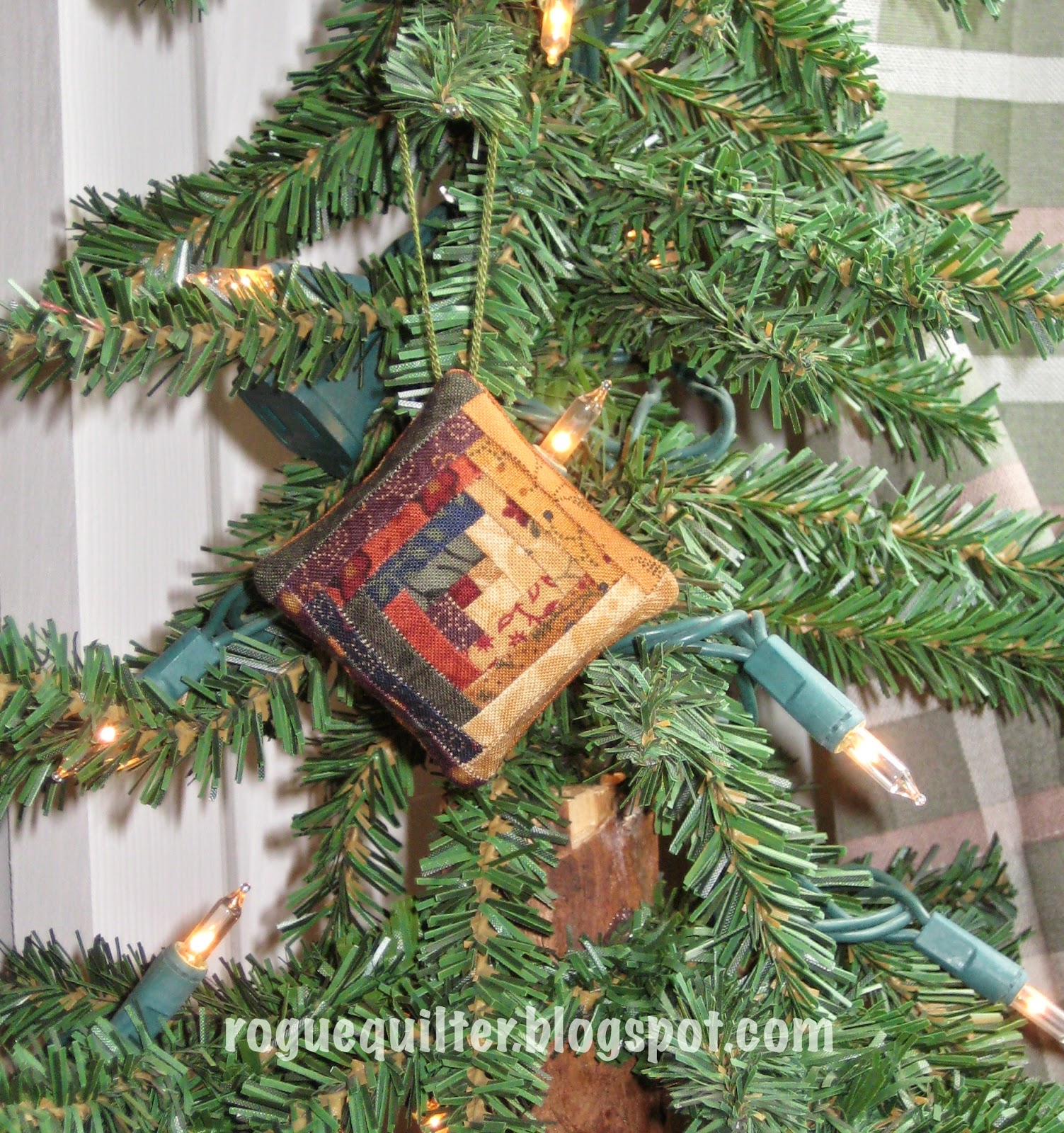 DD#2 was doing a craft booth in the Fall as part of her fundraising for Dravet Syndrome research. I pledged to make a bunch of ornaments to sell in her booth. I wanted to branch out a little and try some log cabin blocks. This was my first one. I had to tweak them a bit after this.


Here is the first batch of ornaments for the fundraiser. 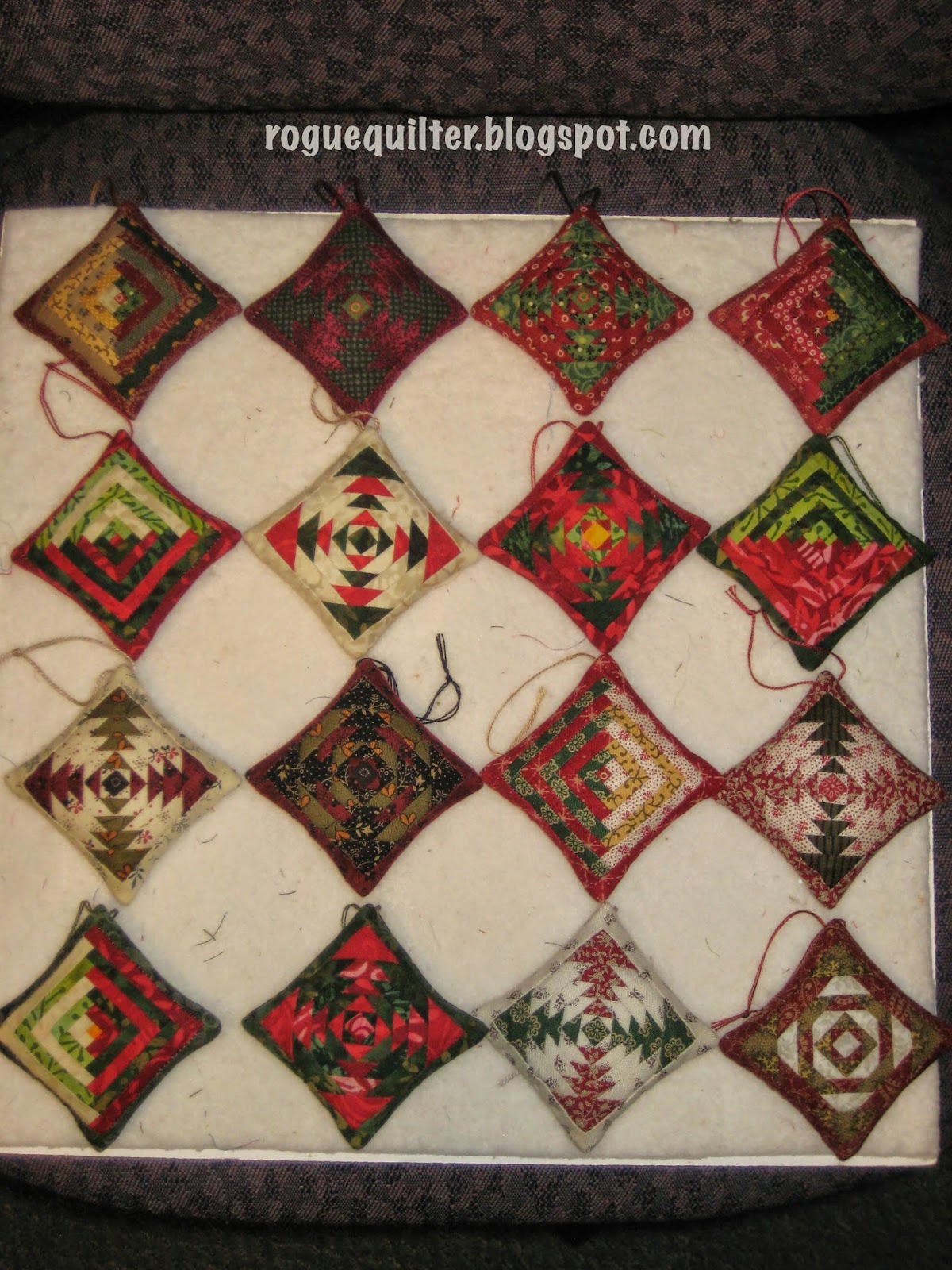 DD#1 was helping make ornaments, too, and once they were all together I draped them all over my sewing room tree and took this photo. 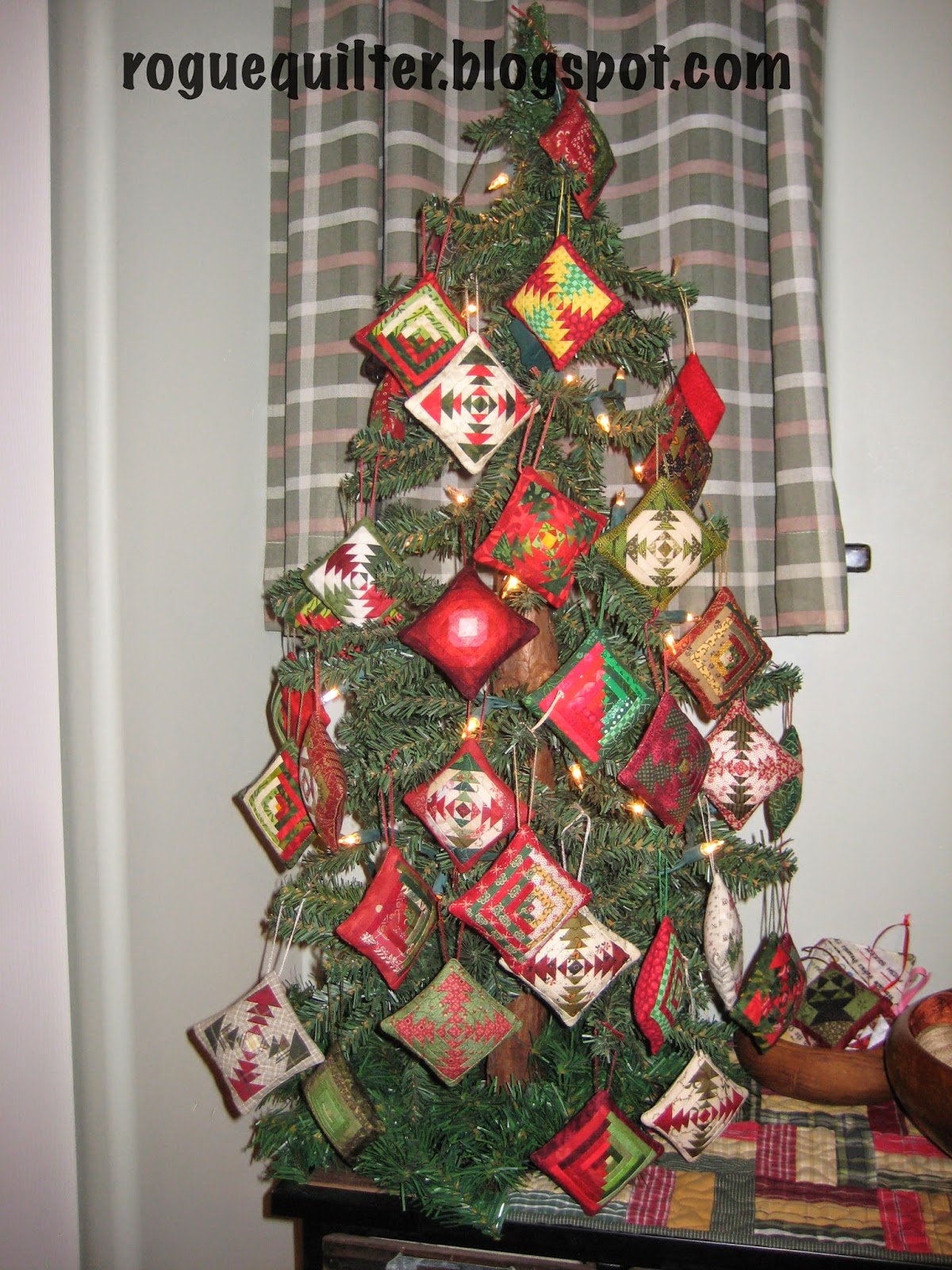 Orders came through my blog from other bloggers that wanted to support the fundraiser and I made several more over the last few weeks of the year. 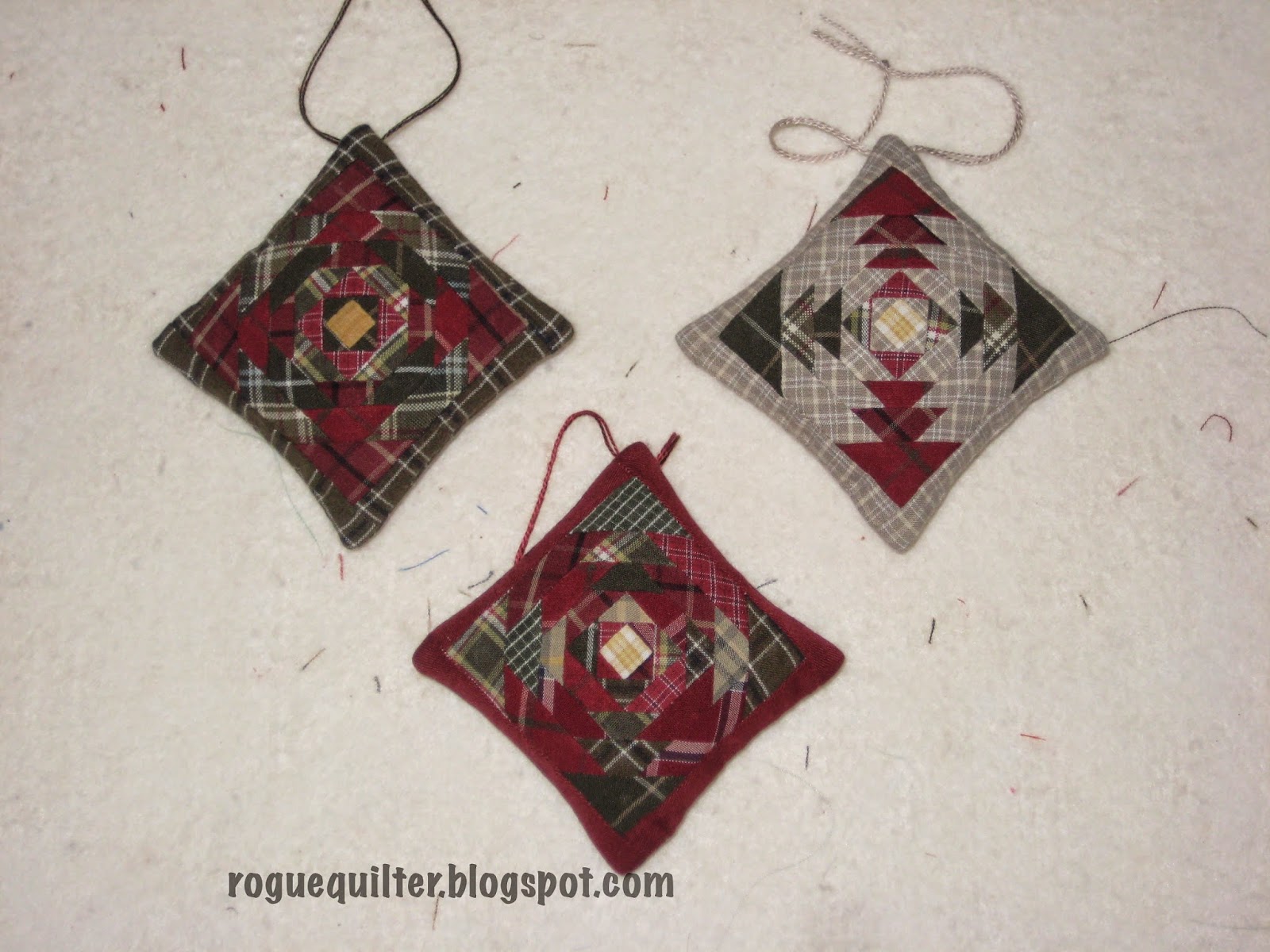 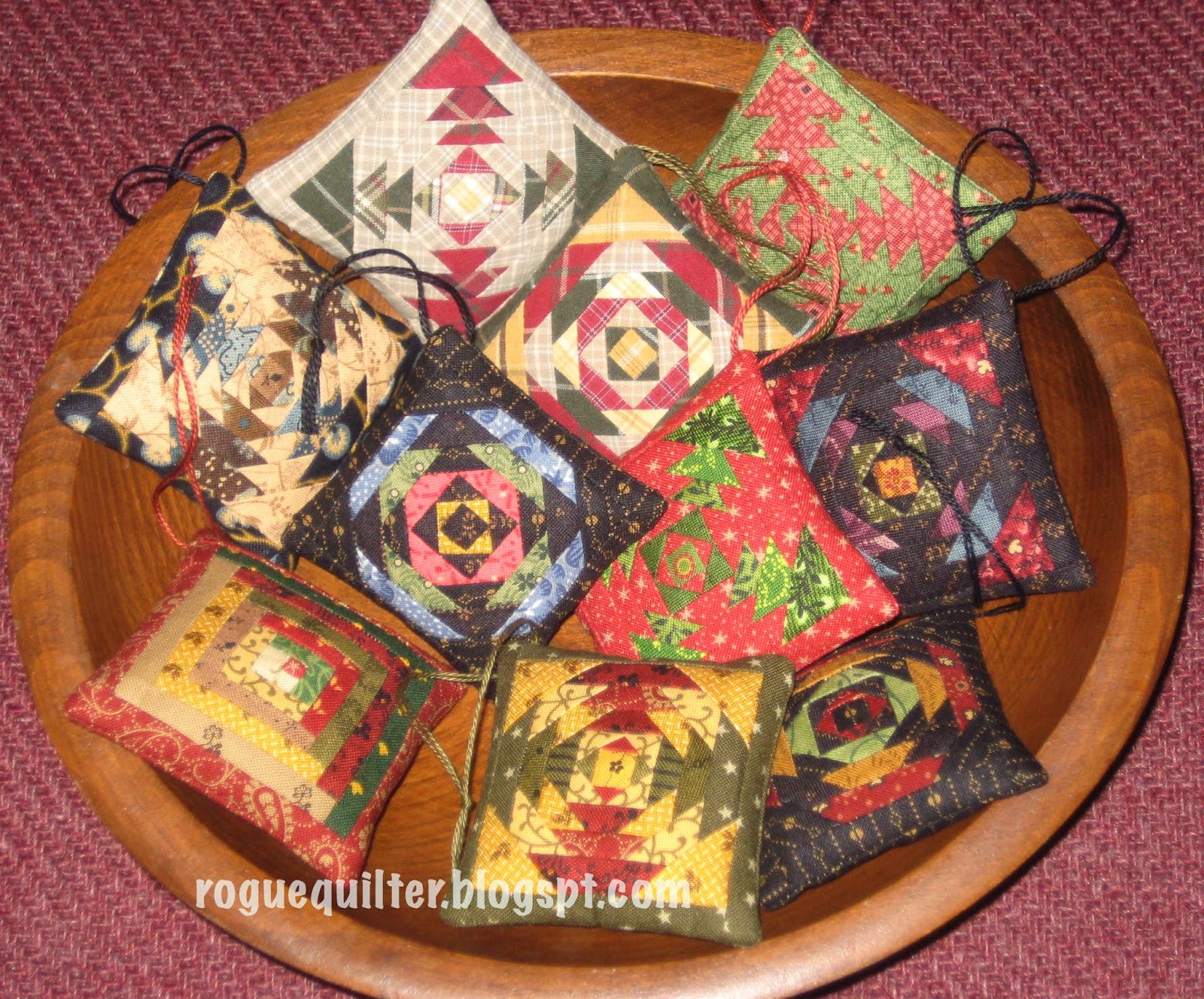 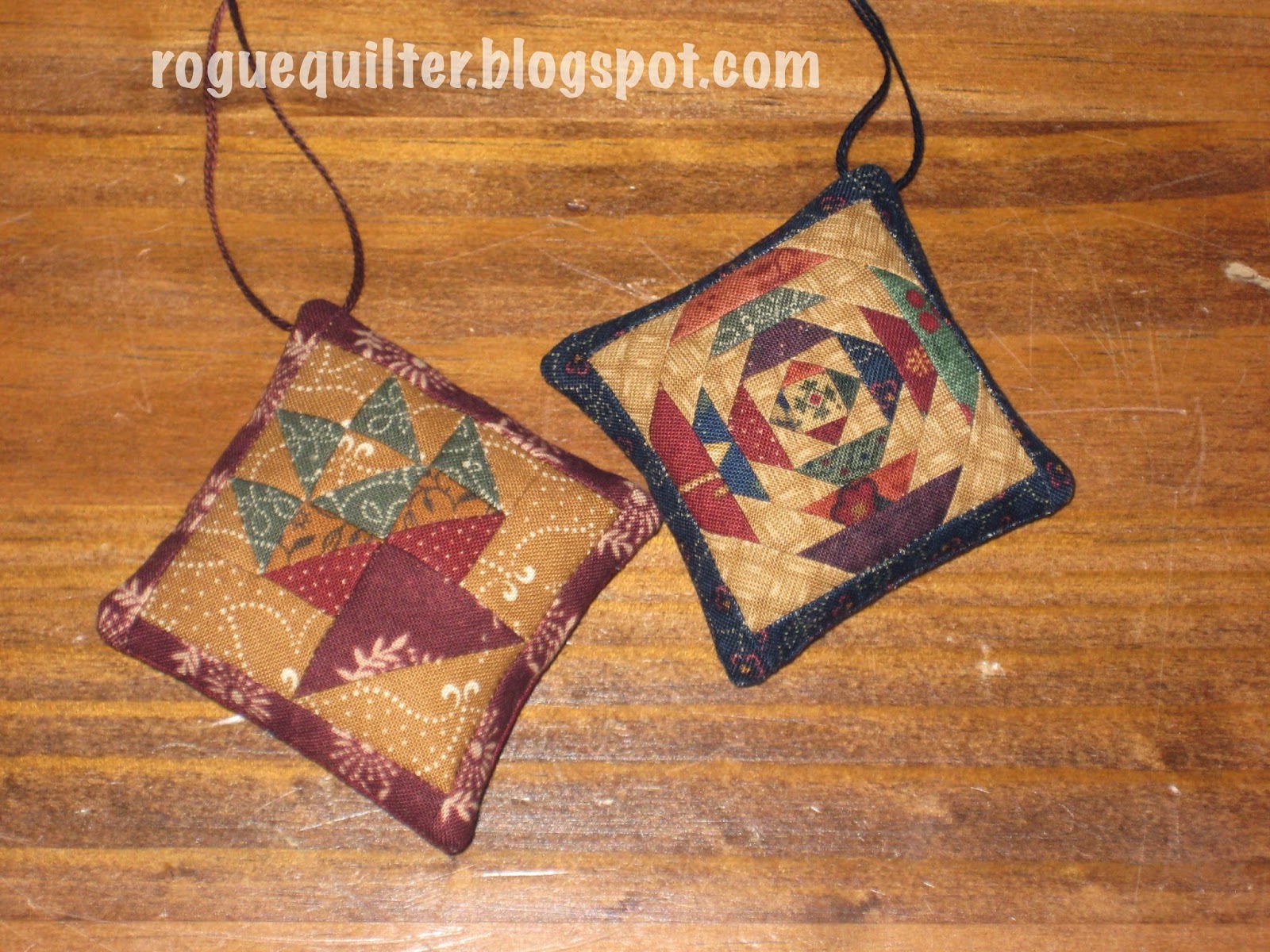 You can see above that the baskets started creeping back into the picture.

In January of 2014 I was attending a Winter Retreat with Pam Buda as instructor. I also had the fun opportunity to make pies with Pam. I made up a bunch of little ornaments for Pam, the sponsoring shop owners, and my friend who got me through the snowy canyon to our pie-making session--and for a friend that would be there and had just had a birthday. The basket ornie below was for the birthday girl. 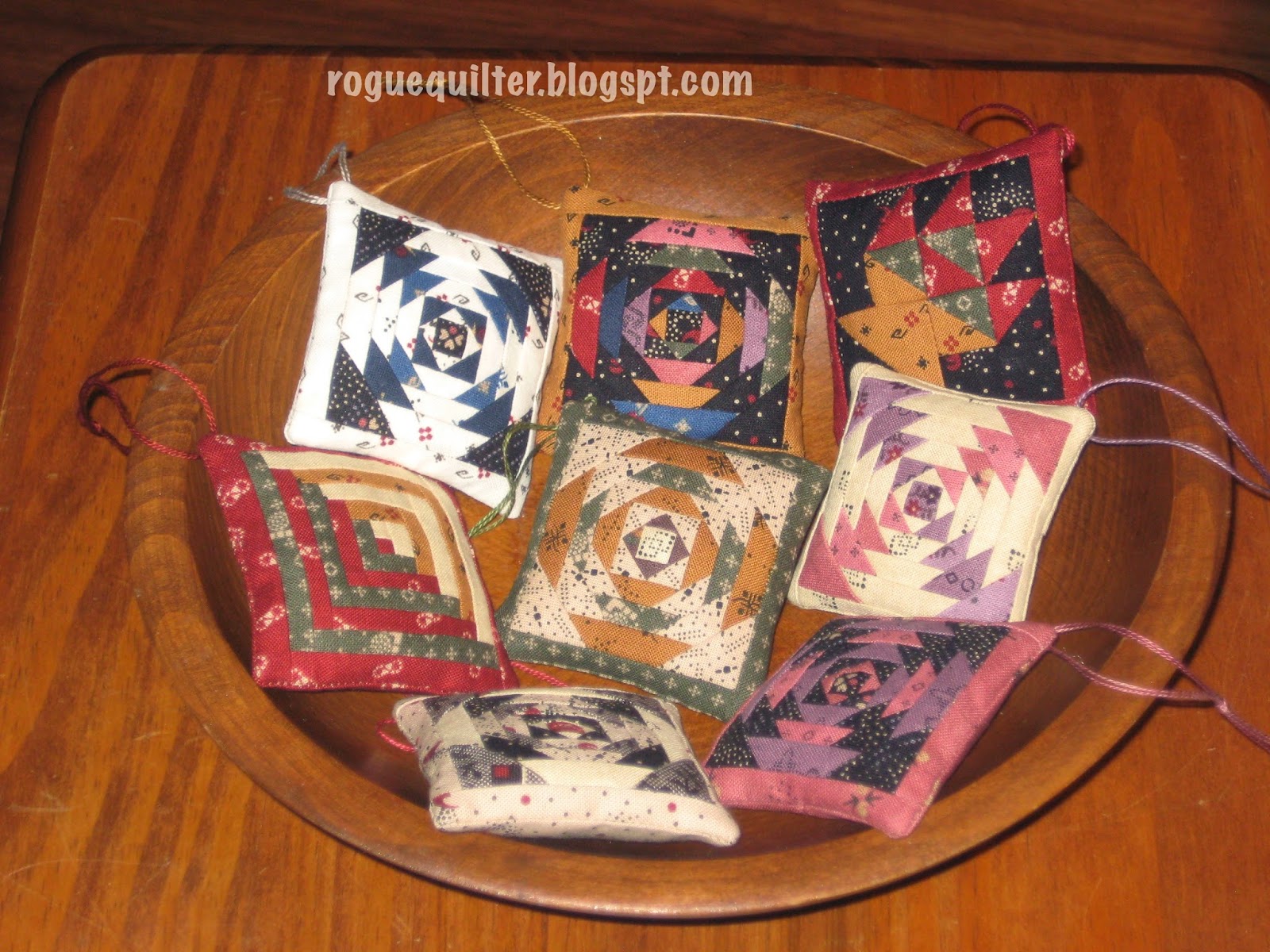 The basket was so popular, that at the retreat I promised my table mates that I would make basket ornaments for them. They are in the photo below. 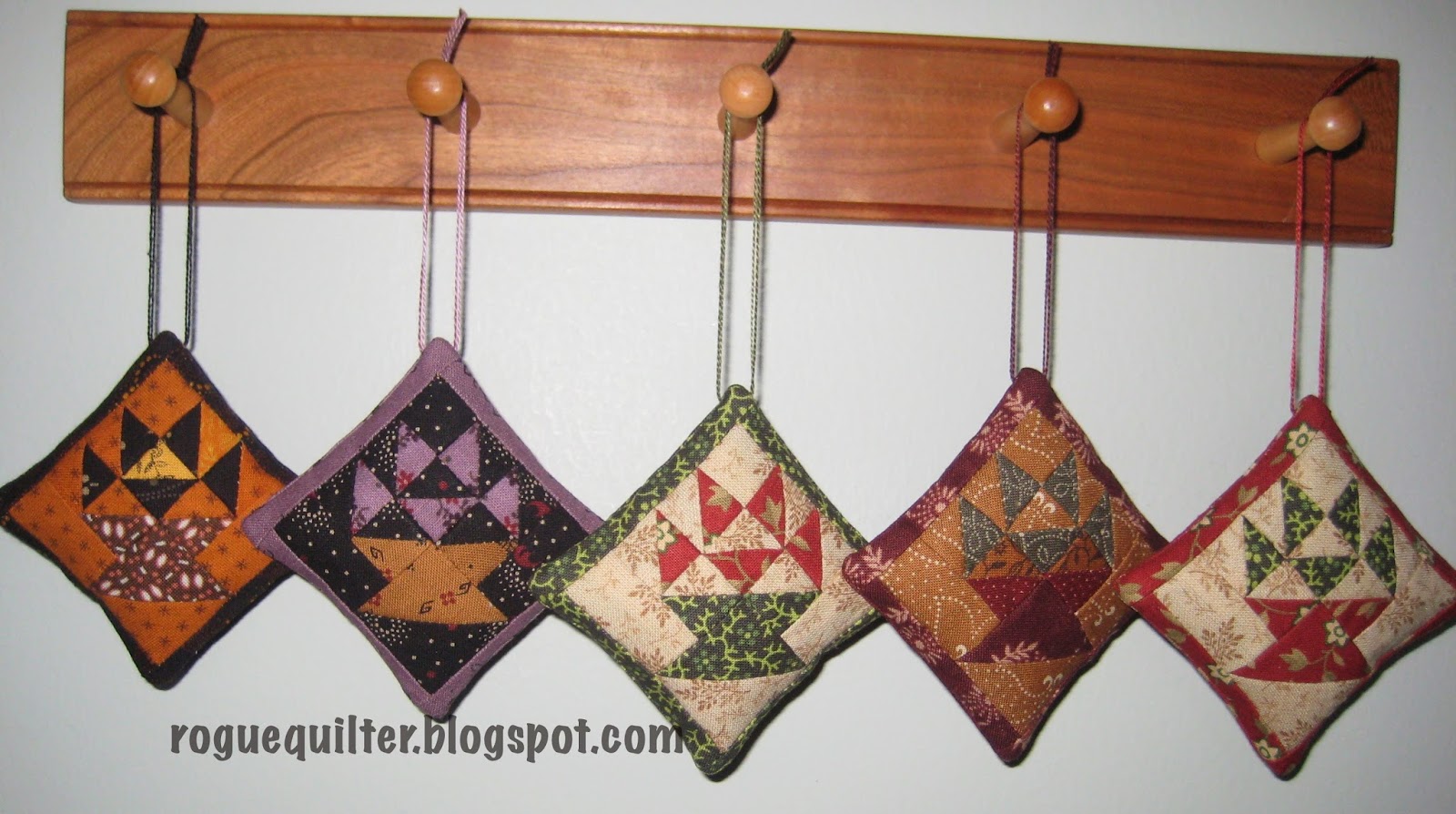 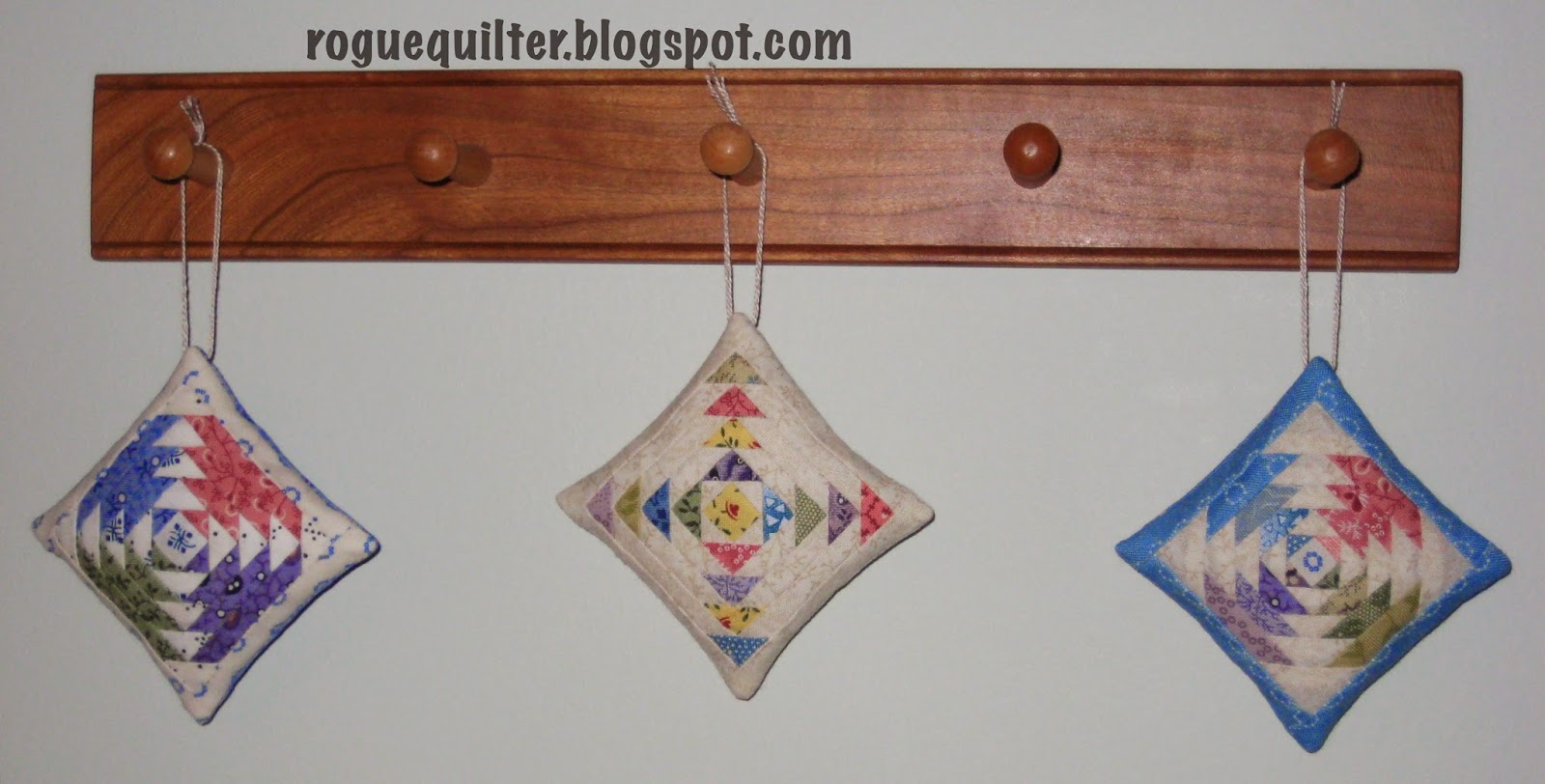 When I was working on my "Wandering Geese" miniature quilt I loved those Springy colors so much that I used the scraps to make these pretty little ornaments. They have all been gifted now. I will be making more.

After making the miniature quilts for the trunk show I did in May 2014 I had lots of little HSTs in my "parts" bowl. These are the results of playing with those. 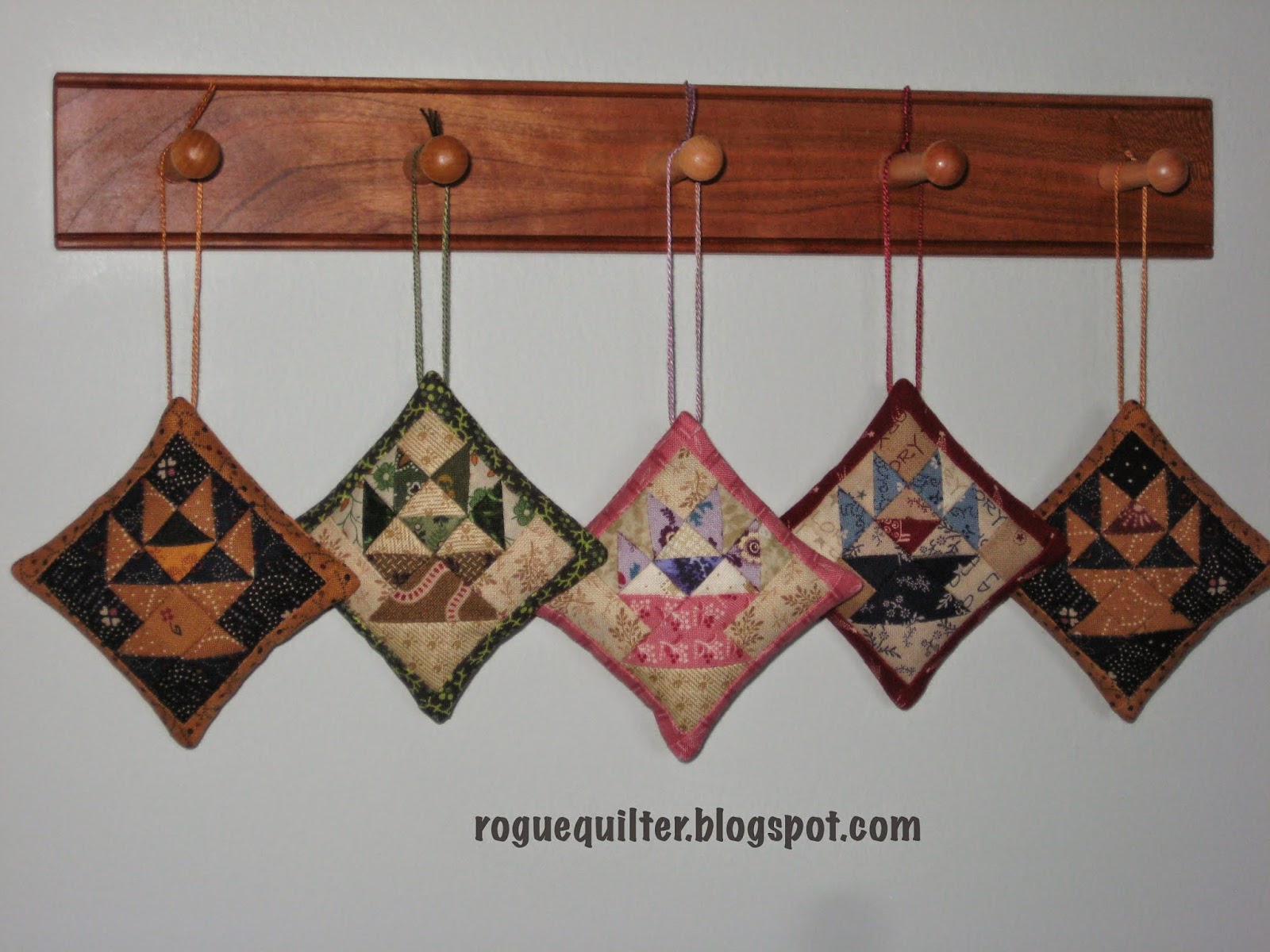 A couple of stars to complete a little patriotic display. I know I've made another star ornament or two, but I don't know what I did with them. 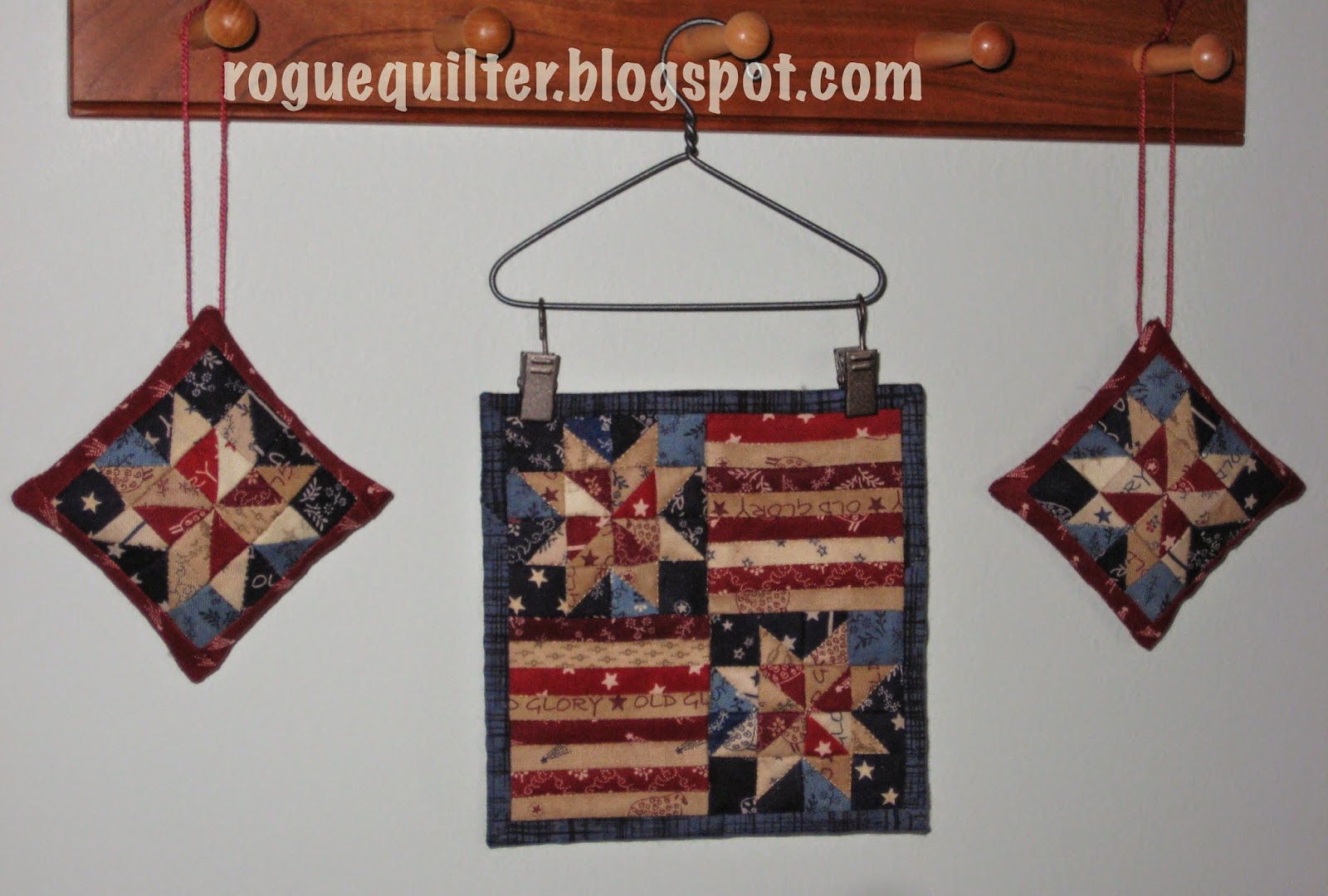 And the last four of the half dozen ornaments made from Mom's quilt scraps to be used as a gift to my niece for her wedding shower. She and my Mom have been very close and I thought they would make a good gift for her. 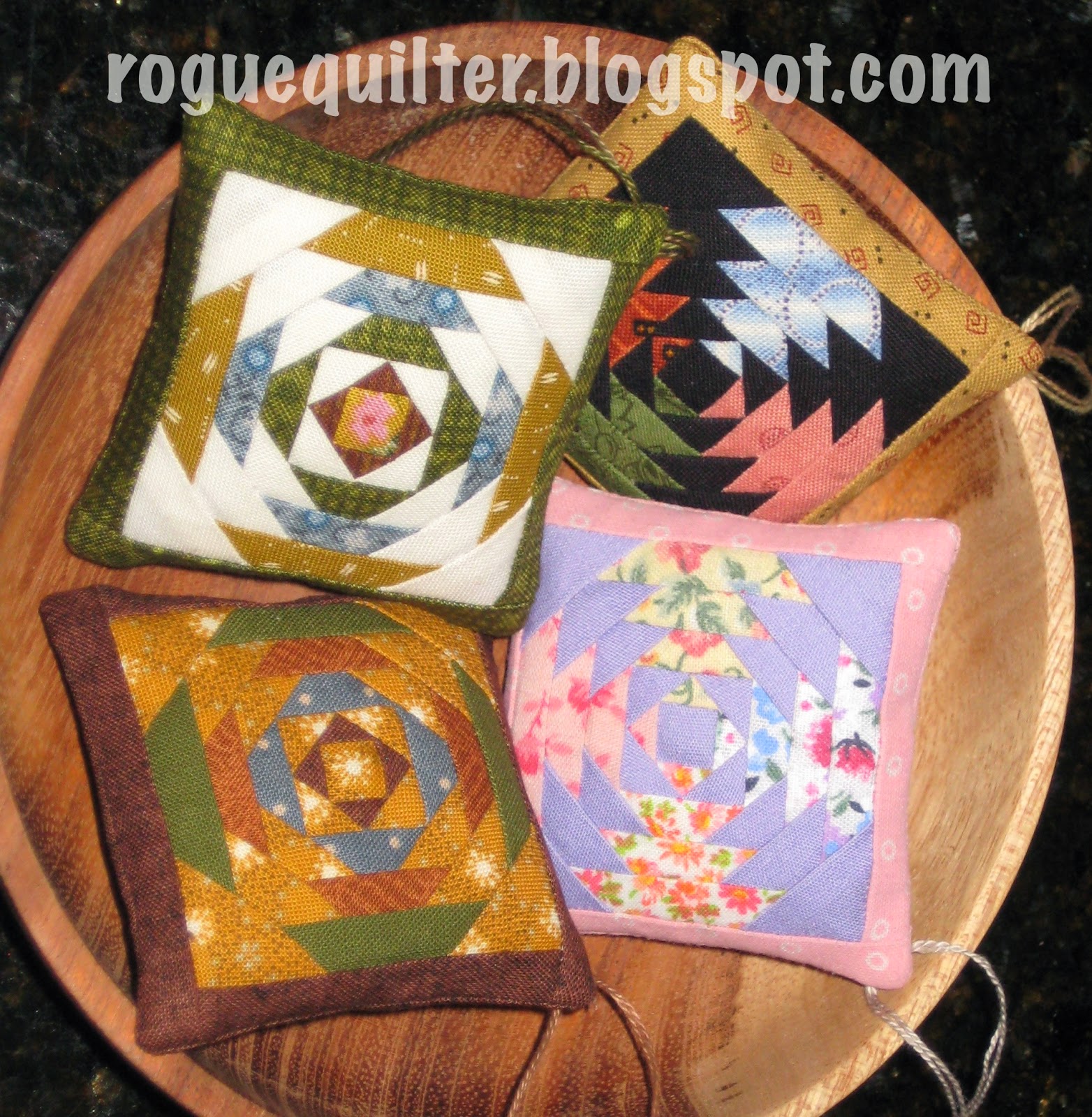 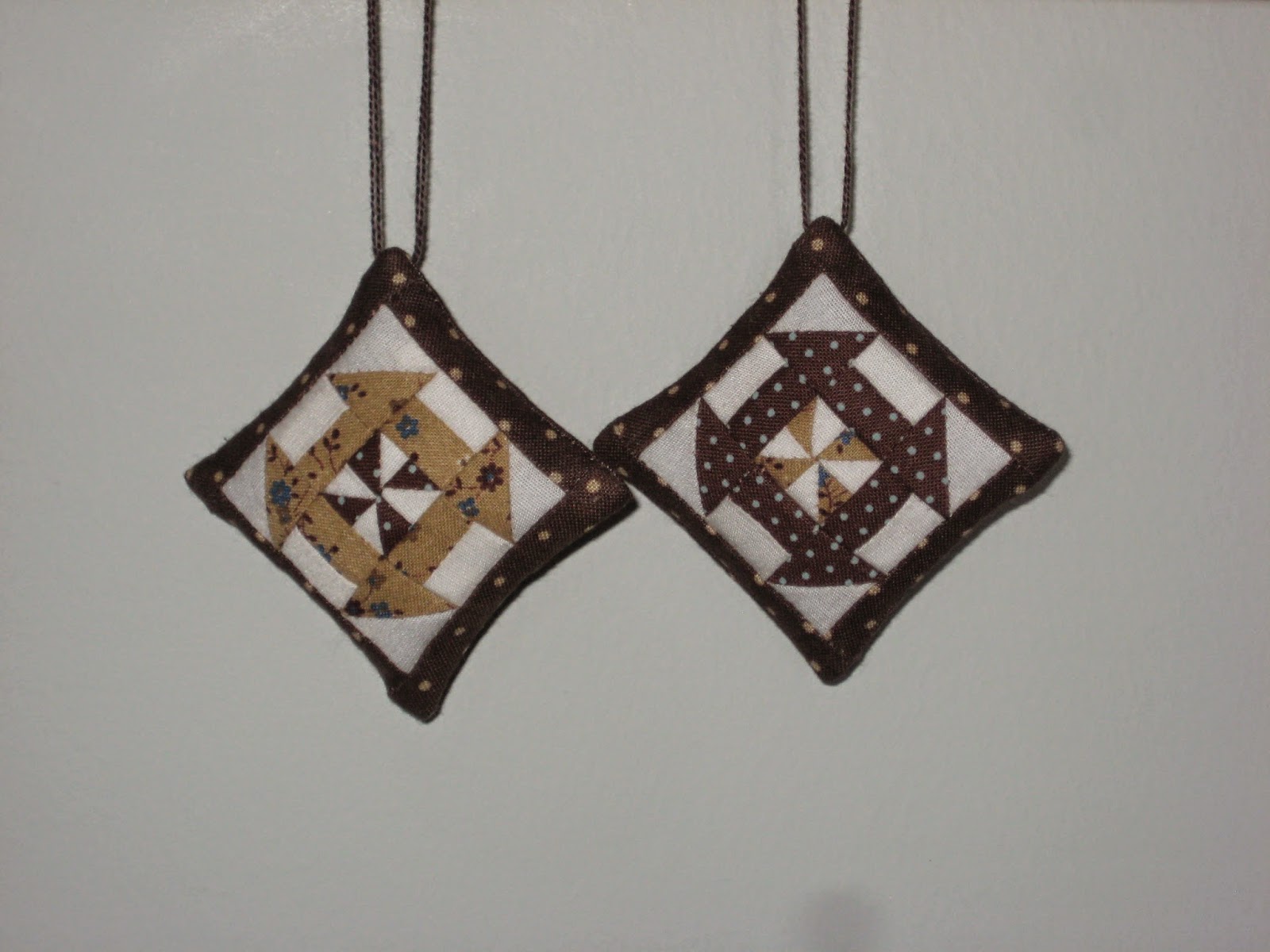 These two were made for Terry (of Terry's Treasures blog) from her gift of the brown bonus triangles from a project of hers. I used one of Jenny Doan's Disappearing Pinwheels tutorials. 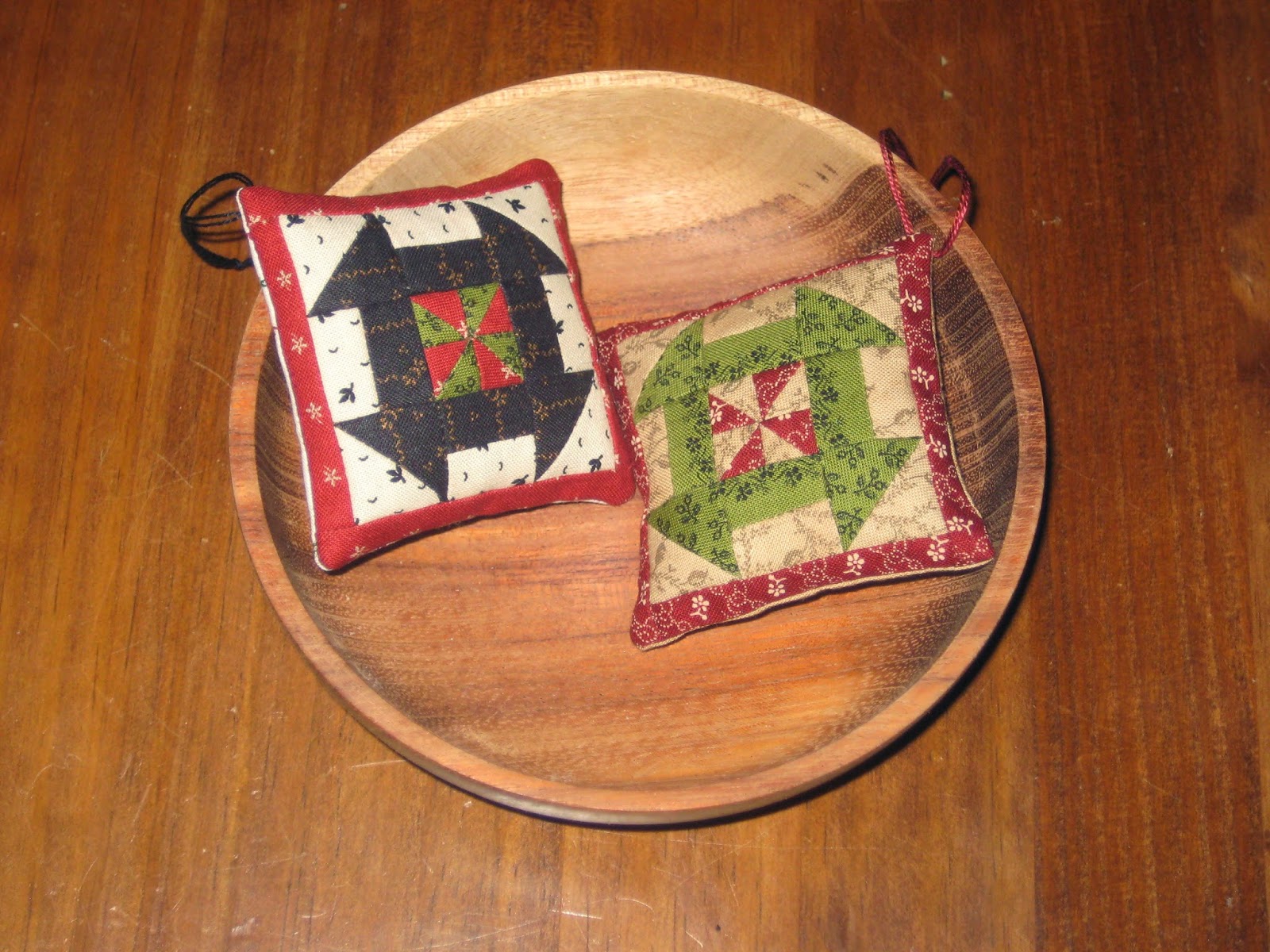 And speaking of Jenny Doan, when I took a class from her in 2014 I made an ornament from the DP design for her and one for each of the two daughters that accompanied her. I forgot to get a photo when the third one was made. 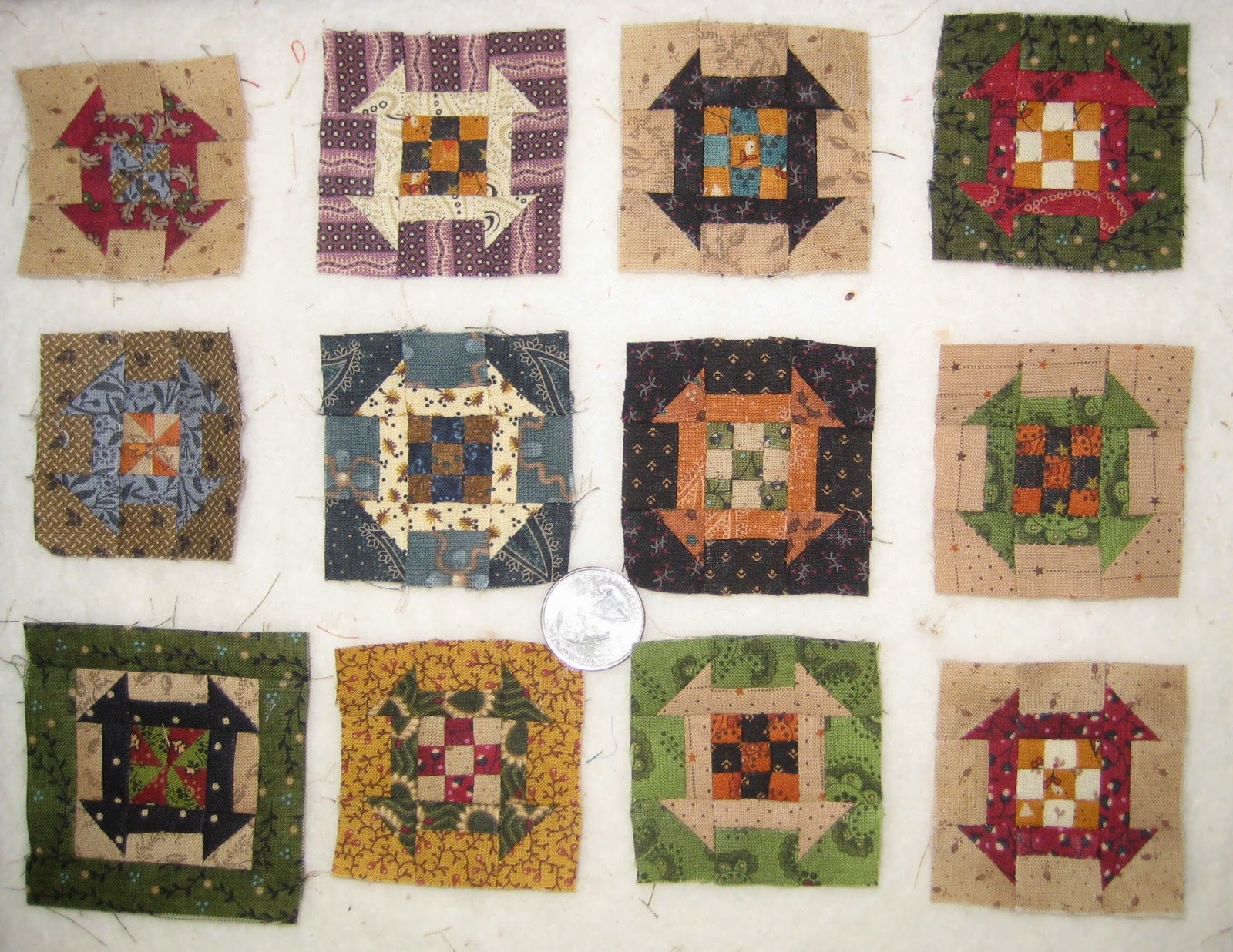 I am getting sloppy about getting photos of finished ornaments. On the right are a couple more pinwheel efforts. Then I was getting ready for a class from Kim Diehl (Oct 2014), so I tried some ornaments made using her churndash 9-patch design from the quilt "All in a Row". The one in the middle, and one of the Christmas colored ones on the left were gifted to Kim. Most of the others were gifted to friends and family in Christmas 2014. I kept a couple of the Halloween colored ones. 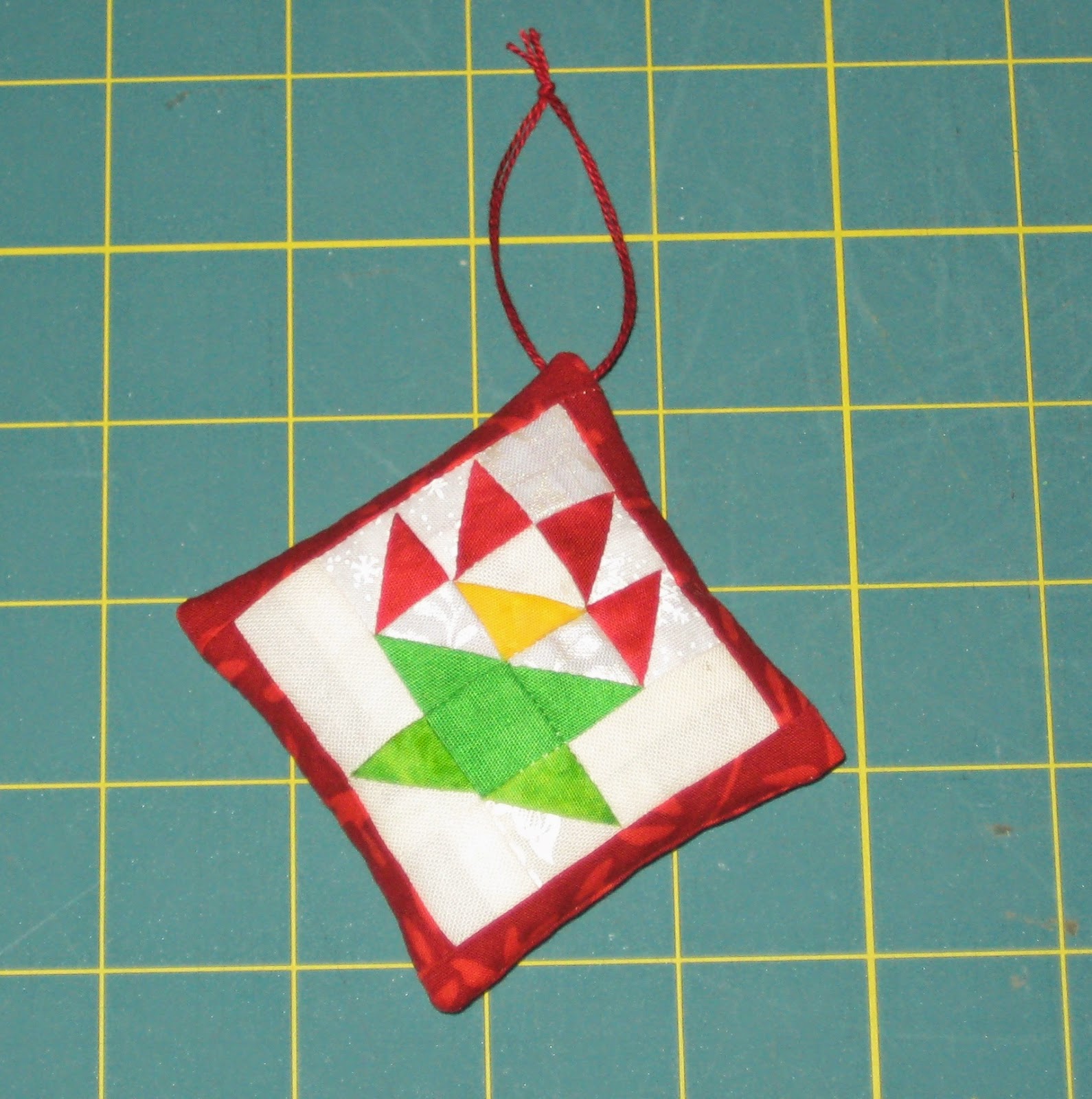 This little basket was a gift to Sandi (kwiltnkats blog) made with some HSTs she had shared with me. I have made multiple little quilts from those HSTs and still have quite a few left.


Time will tell if I continue to update this. I know I have already missed photos of multiple ornaments that have already been gifted away.

Love to paperpiece and love your little ornaments. I have been collecting yardsticks for a similiar project.

oh my gosh, you are one Crazy lady to do these mini quilts as ornaments. You must have the patience of Job. They are all so adorable. What size do they end up? Working with such tiny pieces--- Unbelievable!!!! Just love all of them. Super.

Love, Love, Love these and have figured out how to make a couple designs myself. :-)

Just beautiful and inspiring. I use to love paper piecing, but haven't tackled any for a long time, but with a new interest in mini's I think this is the inspiration I needed to get back into it. Thank you.

do you have patterns that you use to make these beautiful treasures.

I found your blog today and fellow in love with your bevy of ornies. I was afraid you were talking about my brother when you said ornies. He is ornery. He has been a pest to me my entire life. I think he was a menace the day I came home from the hospital. Anyhow, you work is lovely. Do you have a source for your patterns? I'd love to try my hand at making some and have no idea where to get a pattern or how to start to make a pattern? Do I take a regular pattern and make it a mini? Thankks for sharing. Susan