---whether you are having fun, or not!

So much going on in life, that stitching has really taken a back seat, but I finally scrabbled together enough for a post.

Last post I showed a little double 9-patch block I had made using the Itty Bitty Eights ruler. Now it has a purpose. I made it into a pincushion, which finishes at 2 3/4" square. 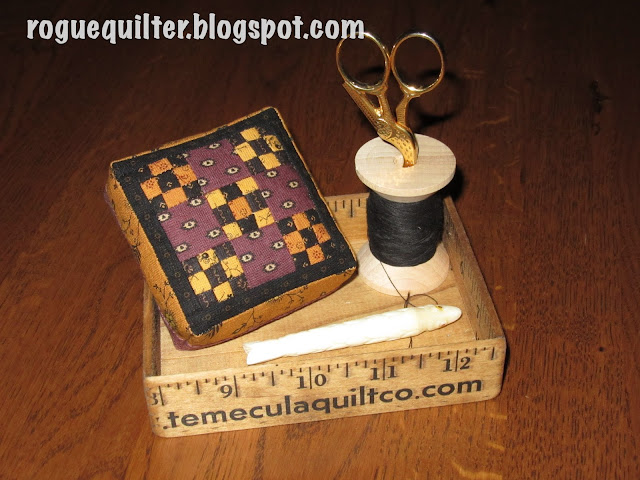 Love that little Temecula box. It was part of a sweet Christmas gift from Sandi (kwiltnkats blog).

The Attic Heirlooms Ornament of the Month will soon be posting #6, and I have barely finished #4.
As I have said before, I am making mine into a little Christmas quilt, rather than individual ornaments. 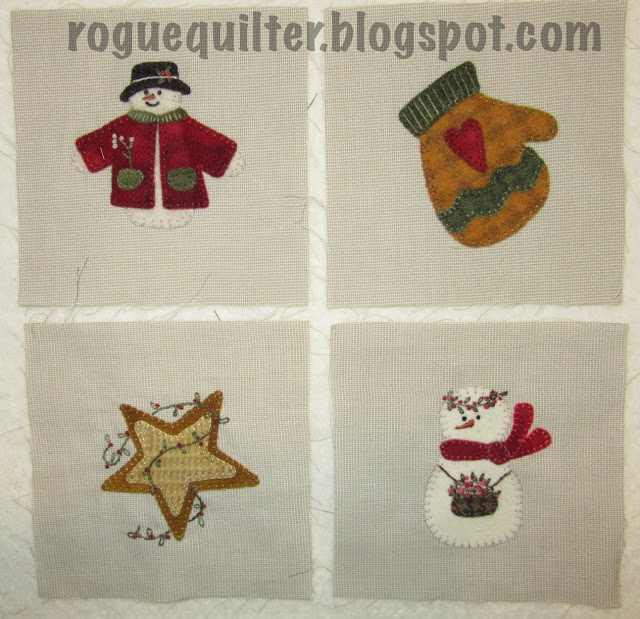 Do you get an idea as to why I usually avoid BOM projects? When I start falling behind I get discouraged and often drop out. And believe me, I ALWAYS fall behind. : ) 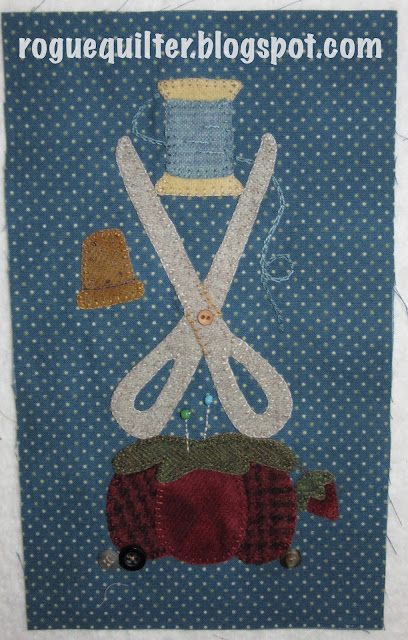 The Buttermilk Basin Mystery BOM just posted block #5, and I just finished #4 on this one, as well.
I like to add my own little touches to these blocks, when I can think of them. I added the strawberry to the pincushion, the button to the scissors, and stitched a couple of pins onto the cushion, with beads for pin heads. 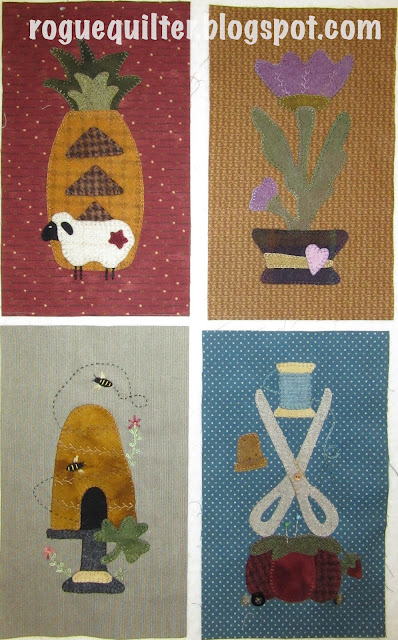 This shows the four blocks together. I love Stacy's designs and hope I can keep up, or I should say get caught up and stay there. : ) 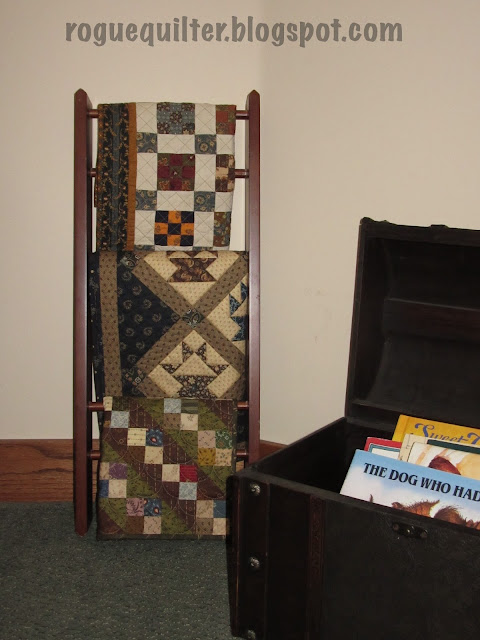 I want to show this tiny ladder I found in a thrift store. I have no idea what it was meant to be, but I brought it home and filled it with little quilts. It sits beside a small trunk where I keep seasonal children's books for the grandkids.
It is just over 2' tall. So fun.

One last thing--May 11th was my 4 year blog anniversary, so I am having a little giveaway for my faithful followers. So many of you have truly become friends and I am enriched by associations with quilters from around the world! When I began this little blog I never dreamed I would become well acquainted with such delightful people, from widely varied backgrounds. My life is definitely better for knowing you! 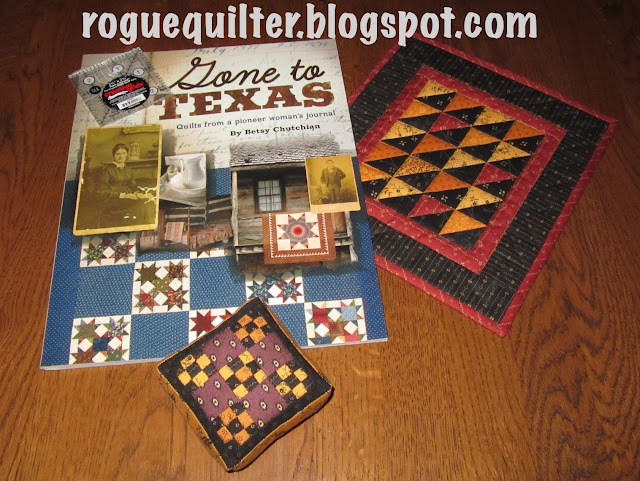 I've included one item for each year I have been blogging. There is a little 2 1/2" square Creative Grid ruler, Betsy Chutchian's book "Gone to Texas", my little quilt I named "True" that was made from the leftovers of "Faithful", one of Lori's (Humble Quilts blog) little SAL quilts. And finally, the pincushion I made from the double 9-patch block is item #4. Random stuff, I know, and I may tuck in another giftie or two.

The giveaway will be closed at midnight MST on Saturday.
I am flying to NH on Monday to spend a week spoiling new grandbaby #5, so there is a possibility the prize will not be sent out until I return, but I will try to send it Monday before I leave, if the winner gets back to me quickly with their address.
So leave a comment if any of this appeals to you. : )

By now you surely know that I love making minis, right? 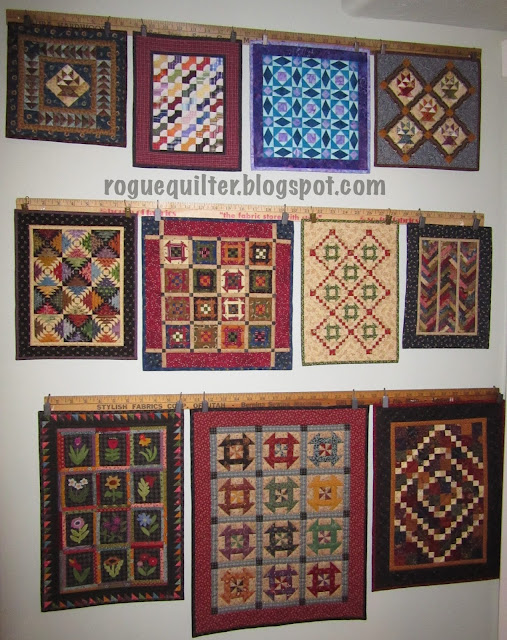 So when Lisa Bongean collaborated with Creative Grids to come up with these rulers specifically for making mini quilts I was thrilled!
Honestly, after finally completing the flimsy for my mini version of Lisa's APQ SAL Burgoyne Surrounded quilt, I was about ready to throw my OmniGrid rulers out the window. I had become so frustrated, trying to cut very precise little pieces with thick lines that were solid in too many places. To top it off, no matter what I apply to the back of my rulers, they slide at the most inconvenient times. And if you put anything on the back that adds any height you are shooting yourself in the foot as far as accurate cutting is concerned.

I had already decided that I was going to be replacing my OmniGrid rulers with Creative Grids when I read Lisa's post here. I couldn't wait to get my hands on the rulers and planned to order them after the next payday. But Lisa beat me to the punch and had a set sent to me so that I could try them and share my experience and opinions. Let me say up front, I am delighted!

Look at the markings--everything is marked clearly, down to every eighth of an inch. 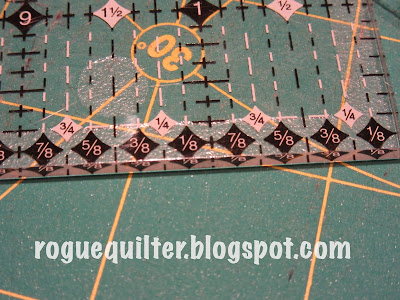 The lines are narrow and dashed all the way along. So easy to line up on the edge of the fabric or a seam line to get a precise cut. 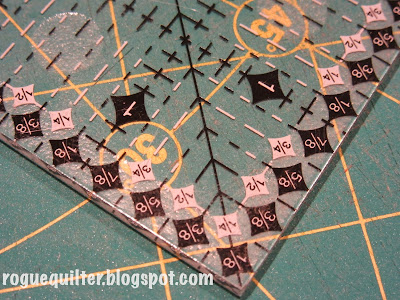 I finally got play time and have experimented with some of Lisa's own patterns for small quilts. 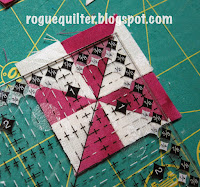 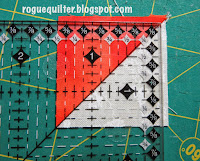 Making 1 1/2 inch HSTs and pinwheels, I made a very small version of the Primitive Gatherings pattern "Pinwheel Garden". Excuse the fact that I made my pinwheels rather hurriedly (no pinning), so the centers don't match well, but the photos show how clearly you can see to line up your cuts. Lisa recommends foundation piecing for this quilt, but I used the "make large, cut smaller" technique to give the rulers a good test. 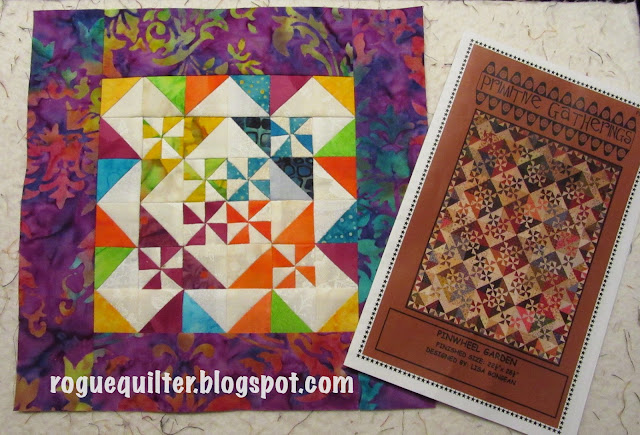 They passed the test so well that I have actually cut HSTs to make the whole quilt in scrappy CW blues and browns.

I decided to give the "Broken Dishes" pattern a try, but this time I thought I'd take it up a notch (or would it be down?) by making the units half the size the pattern indicates. Instead of finishing at 2", those little Broken Dishes blocks finish at 1". 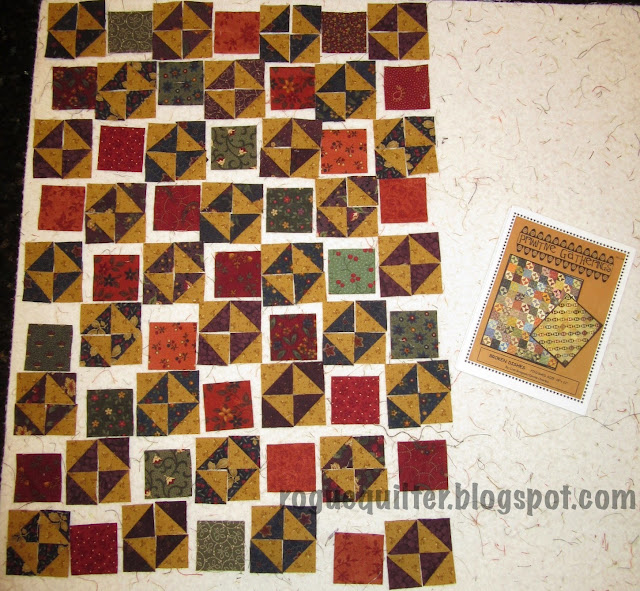 I got everything cut and then began sewing together the broken dishes blocks. 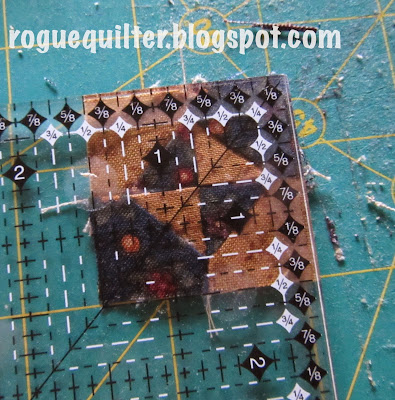 The ruler markings made squaring up these little blocks so easy. I did not "cut large" on these blocks, but had no trouble coming out with perfect little blocks. You can see I was practically just trimming off fuzz when I squared them. 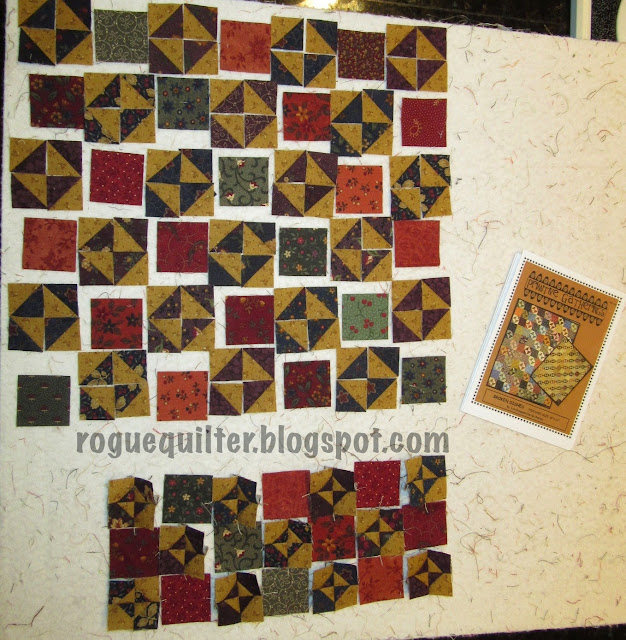 After completing enough broken dishes for three rows, I decided to stitch those rows together and move on to another test of the rulers. 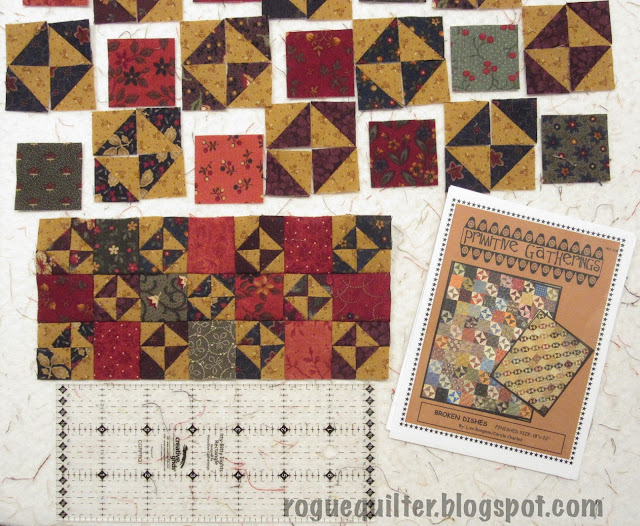 Here are the finished three rows up against one of the Itty-Bitty Eight Rulers. I think it is fun to see how much mini quilts shrink when sewn together.

Next I wanted to test how well things would come together when using one of the less common measurements. I pulled out some thrift store shirt scraps and decided to pretend that the scraps were only 7/8", so I would need to make my cuts accordingly. 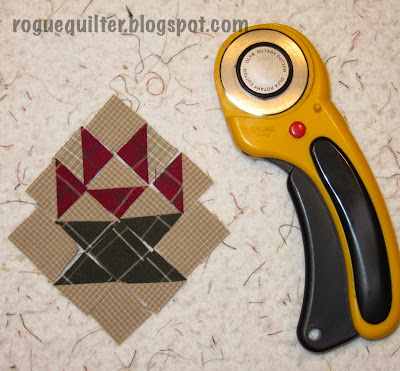 I got lazy about taking photos during this process. Above you see the cut squares compared to my rotary cutter. Below you see the basket in my hand. It will finish at 1 3/4". The 7/8" markings were not hard to work with at all. 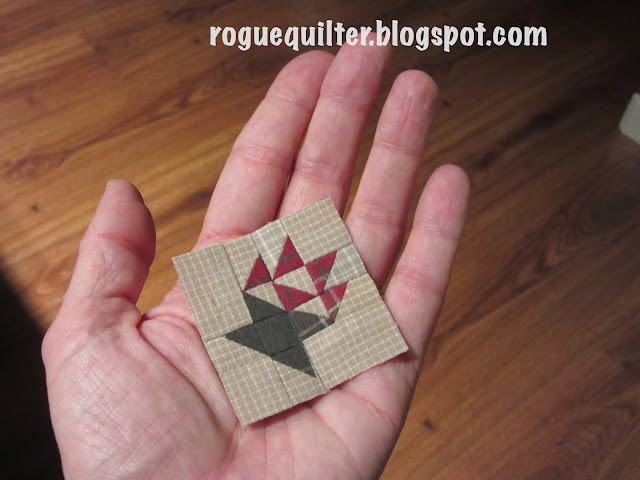 I did try one other project, but took no photos of the process. When I made  my mini Burgoyne Surrounded, the most maddening thing in the whole process was the little 9-patch blocks that finish at 3/4". I was having such a hard time getting good results with the OmniGrid rulers, so I had to try a few tiny 9-patch blocks with these rulers. You can see the little double 9-patch block at the bottom of this photo. It isn't laying flat so it looks wonky, but I was really pleased with how well the 9-patches turned out. That block will finish at 2 1/4". 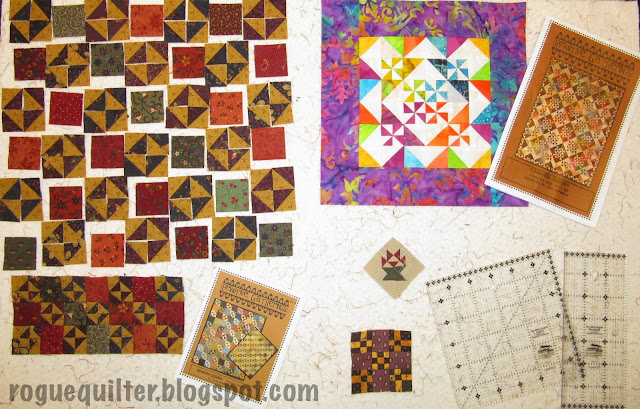 This photo shows all of my "test projects" together, with the rulers. I haven't had much sewing time lately, so this has taken longer than I care to admit. But I can't wait to finish up the broken dishes, and tackle my CW blue & brown version of the pinwheel quilt.

I can highly recommend the Itty-Bitty Eights to anyone who makes minis, or even those of you who make larger quilts that have many smaller parts in the construction. The 6" square is probably the one I used the most, but when I was making the 9-patch blocks by sewing strips, the 3"x7" was very handy. My only wish was that the 3"x7" would have had more markings across the width of the ruler, as the square does. Other than that, no complaints. The textured dots and edges held onto the fabric well. It wasn't until I was writing this post that I realized I hadn't had any slipping problems with any of these projects. Many thanks to Lisa and Creative Grids for a job well done!

Next week is the 4th anniversary of my blog. I'll have to celebrate somehow. : )
Until then,
Janet O.

Not your mother's baby quilts!

Got these sent off Tuesday and they are hopefully now at their new home in NH.
I mentioned that DD#1 didn't want typical baby quilts. These qualify, don't you think? And what fun they were to make! 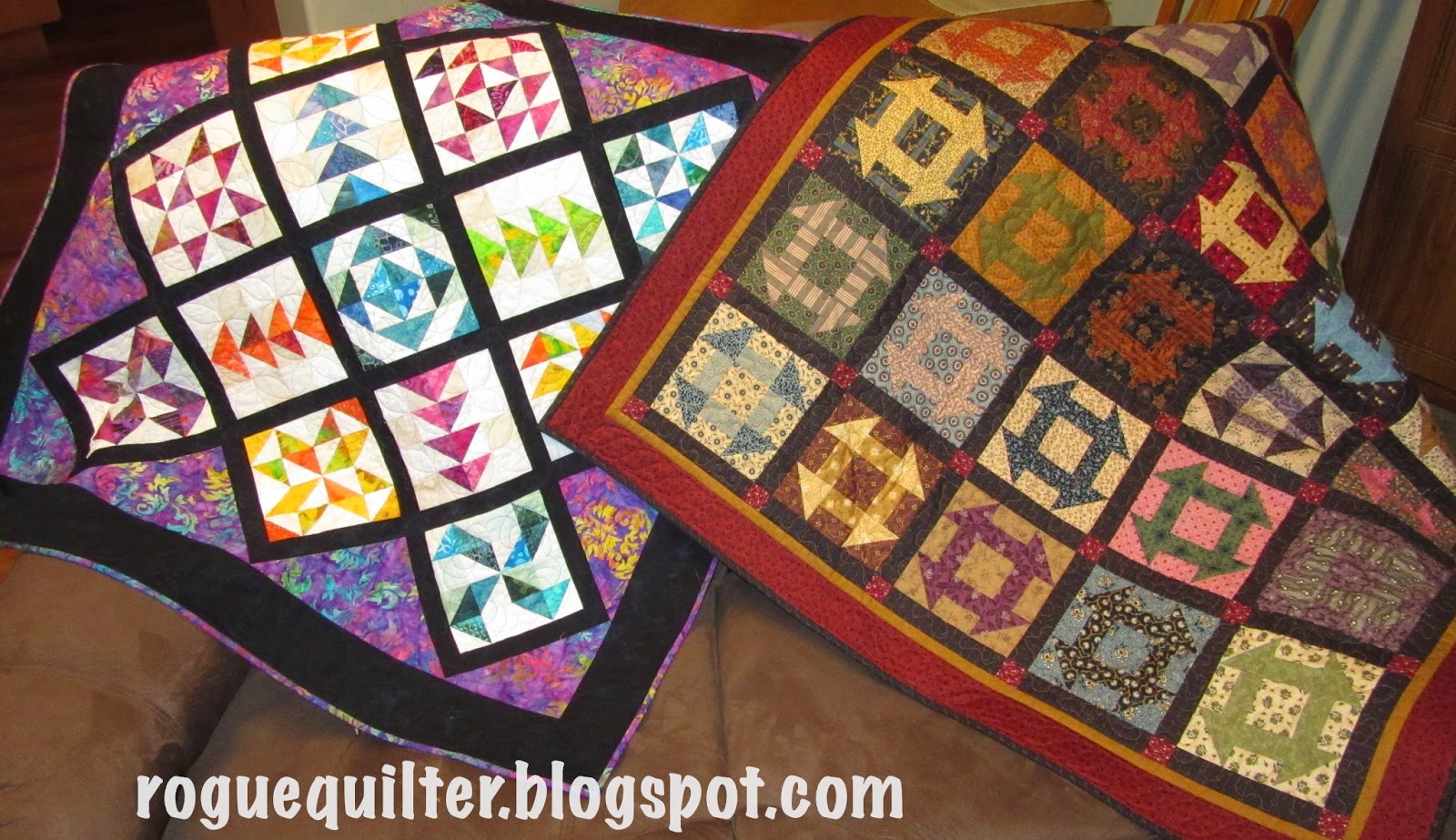 My top two favorite fabric styles are Civil War reproductions and batiks, so you know I enjoyed these. Third on my list would be thrift store shirts, so I think my next baby quilt will come from that stash.

I wasn't going to put feathers on a baby quilt, but those setting triangles just called out to me, "practice your feathers!!". And believe me, I needed the practice. I draw the curve for the spine of the feather and then work my way up one side of the spine, stitching along the line as I come back down to start up the other side 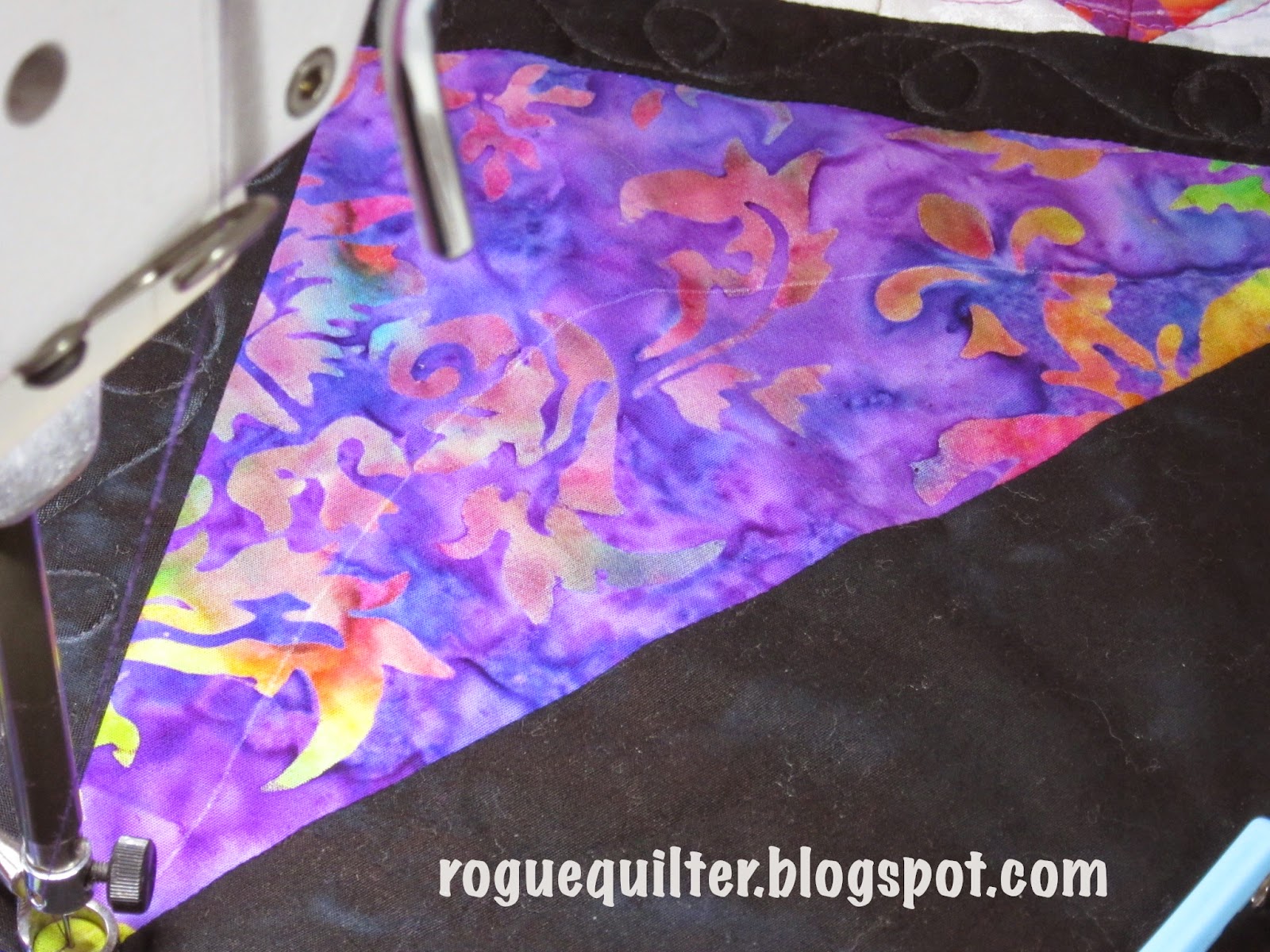 I get the quilt "puddled" around the triangle that I will be stitching, and then I get into the flow of the feathering. It is fun, even when I am rusty and have several glitches along the way. I did not unpick (my apologies to the new grandbaby). 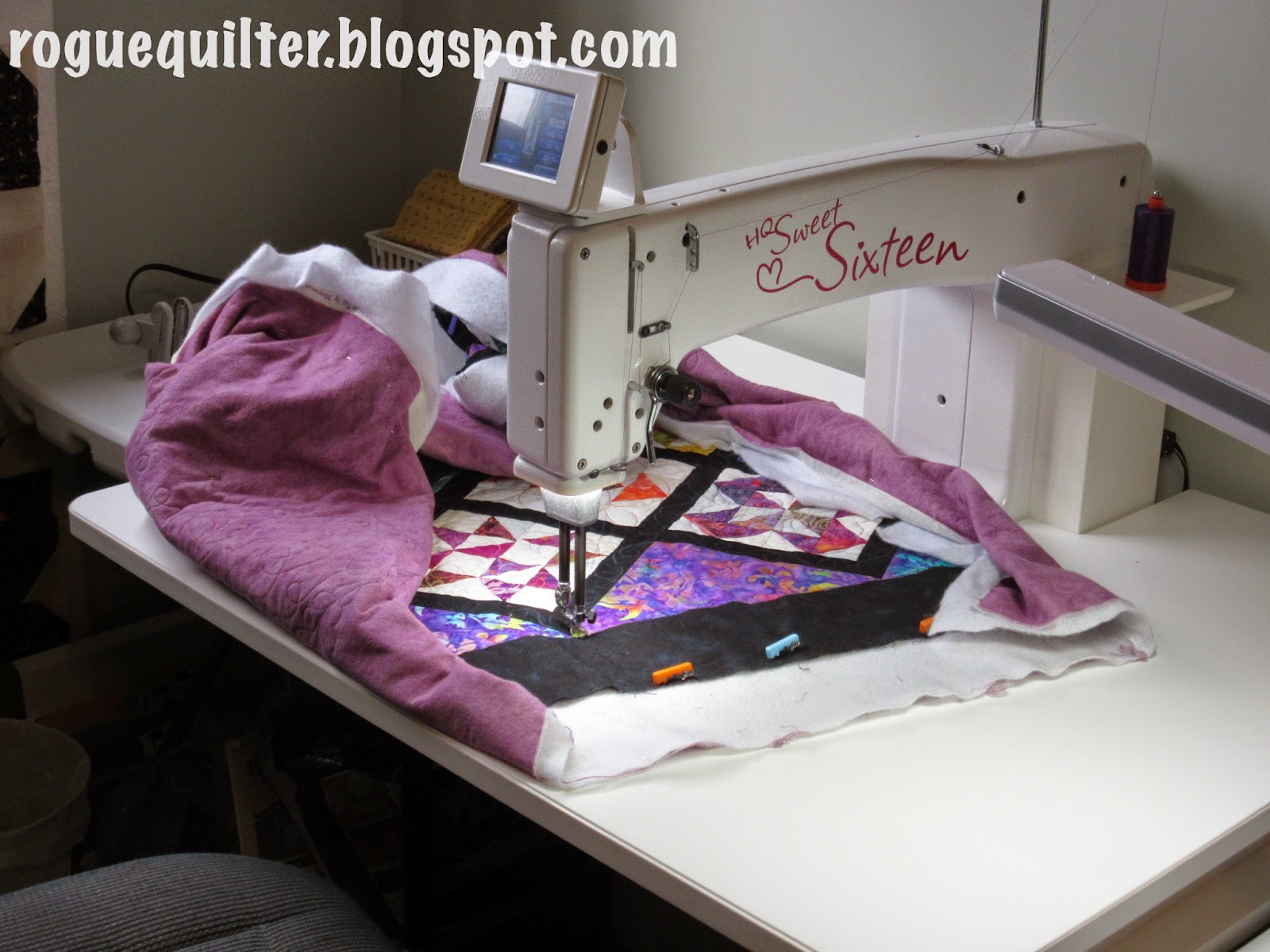 This is what resulted. I realize the final border wasn't stitched when I took this photo, but that's okay, because it wasn't that great. : ) 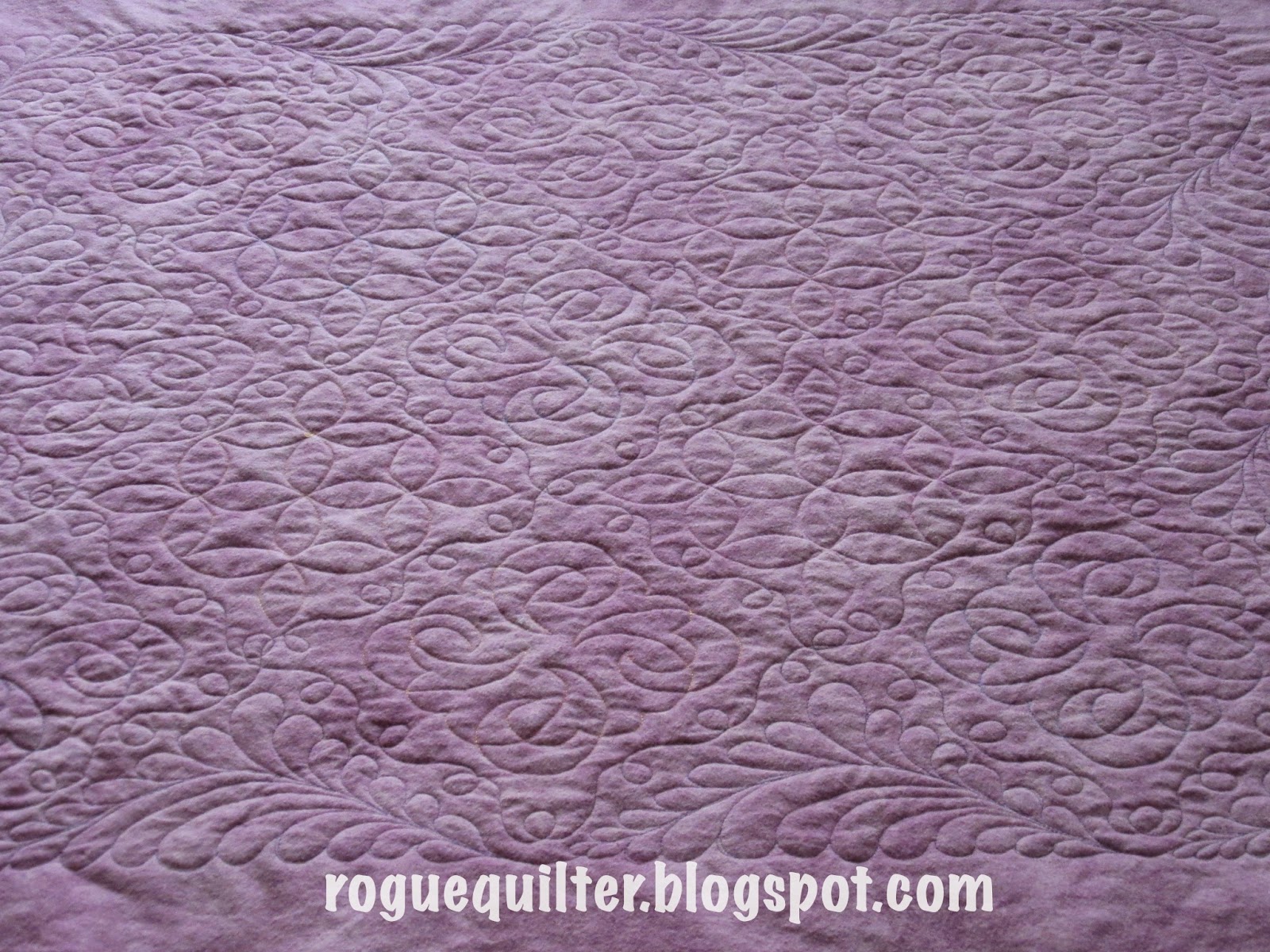 These were April's blocks for those things I don't do. (BB BOM and Attic Heirlooms OOM) 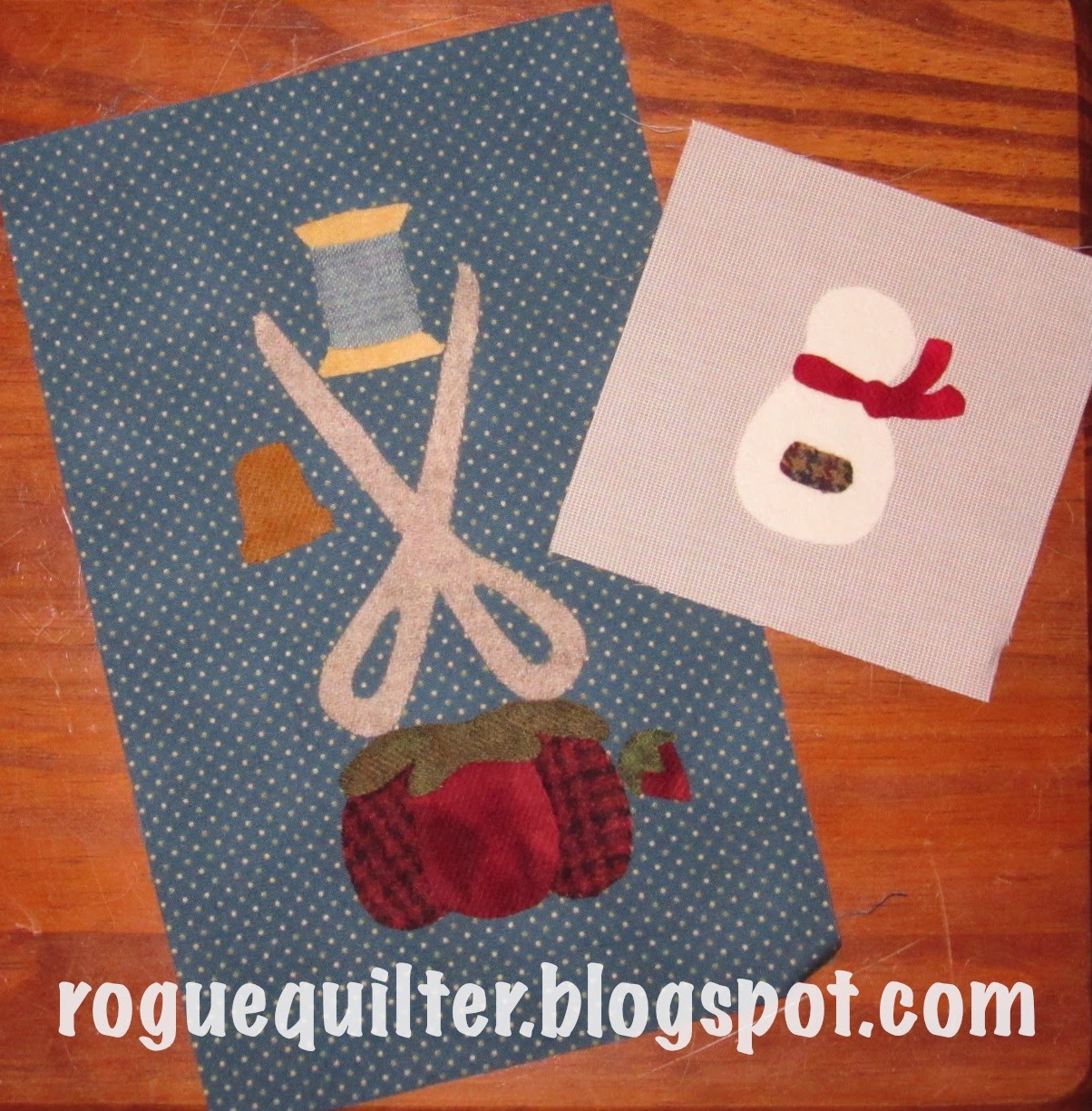 Have only got them fused. May get to the stitching during the MLS soccer game on TV tonight. : ) The snowlady doesn't look like much without all of the stitched details. That will be a basket of flowers in her twiggy hands, and she will be wearing a floral wreath on her chilly brow. If you are doing the BB BOM you may notice that I added a strawberry to my tomato pincushion. Just felt right.

If you follow this blog because you like mini quilts, then you will want to stay tuned. Recently Lisa Bongean of Primitive Gatherings introduced the results of a collaboration with Creative Grids. These rulers are expressly made to meet the needs of the mini maker. They can be ordered here (6x6) and here (3x7). 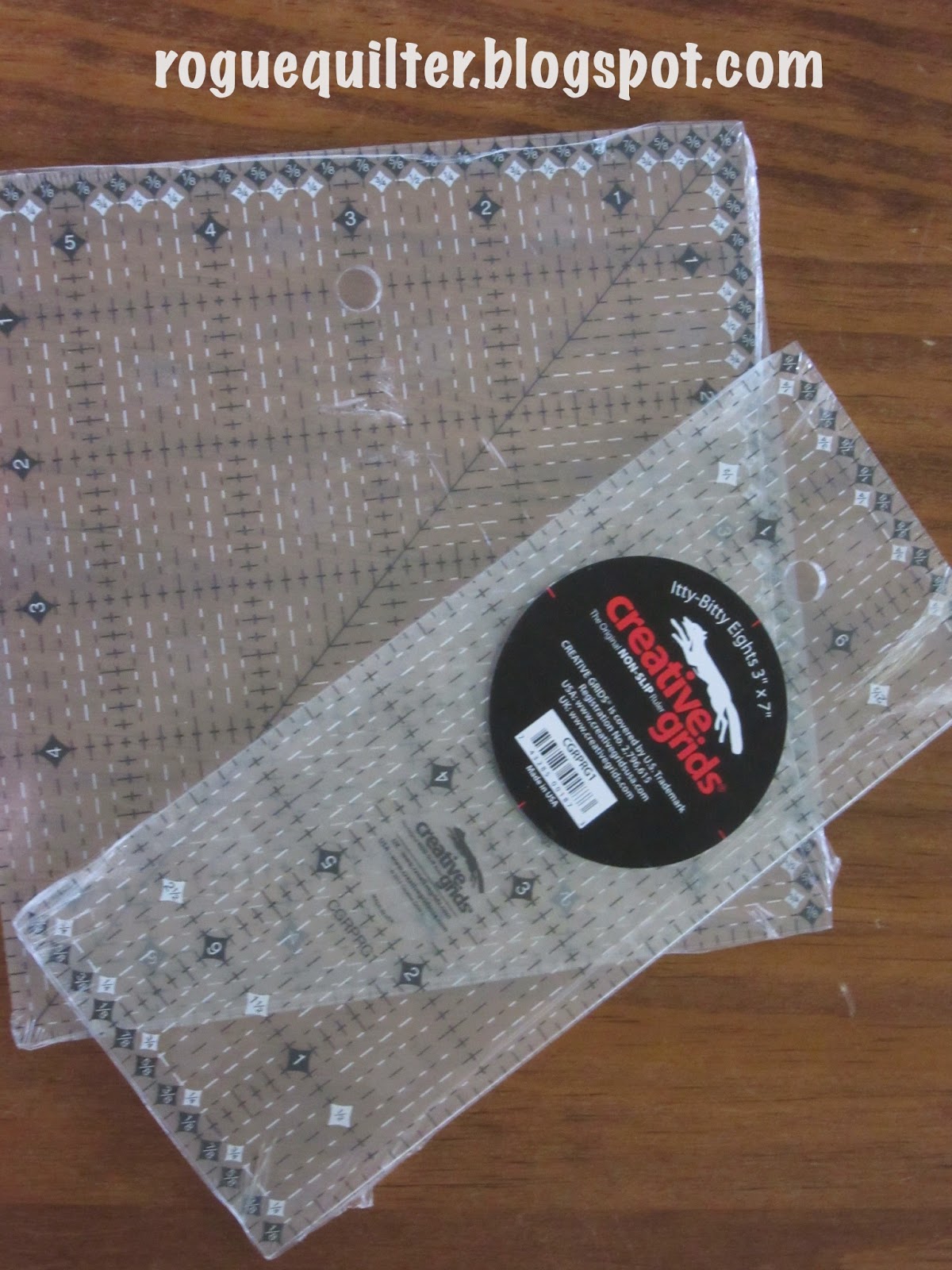 See all of the thin, little dashed lines in small increments, and the measurements written along the edges? And they have the textured surface along the bottom edges to grip the fabric.  I have been playing with them and in my next post I will be sharing my experiences and giving a thorough review. Believe me, I am thrilled! Thank you, Lisa--somebody needed to do this!!

I'll leave you with another shot of the Sandhill Crane that has been wandering a field to the north of us the past few days. Isn't he a handsome fellow, standing there in the dandelion peppered alfalfa? Don't know if he lost his mate or if he hasn't had one yet, but he looks lonely. 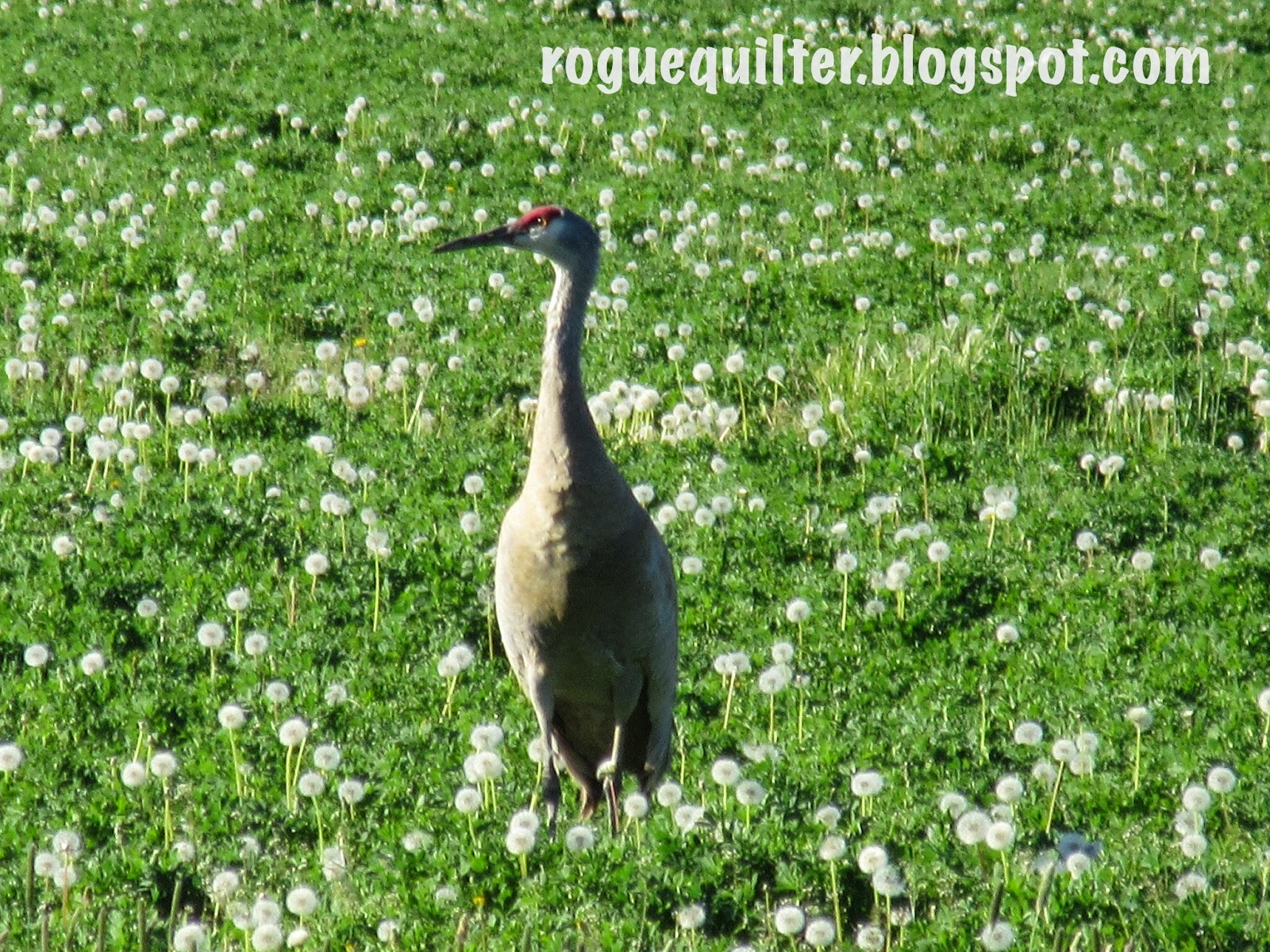 Oh, I forgot to mention that this month marks the 4th anniversary of my blog. One of these days a giveaway will probably surface.