I have joined Wendy (the constantquilter blog) and a few other bloggers in making a mini a month, and if I don't post this soon it will have to be April's, instead of March's.
The tiny 9-patch is finished. 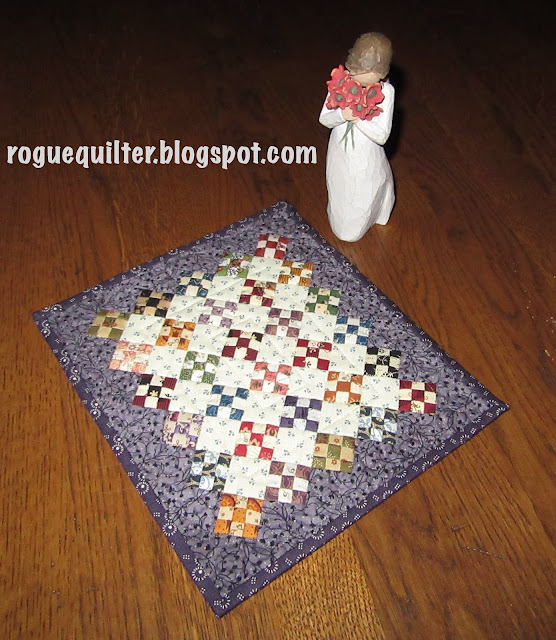 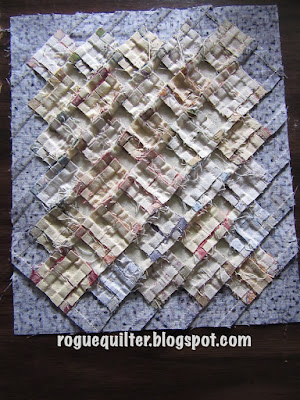 At first I thought about doing some hand quilting on it, but when you have this much congestion on the back, that is kind of difficult.

I didn't press any seams open because I knew I wanted to do some Stitch-in-the-Ditch. 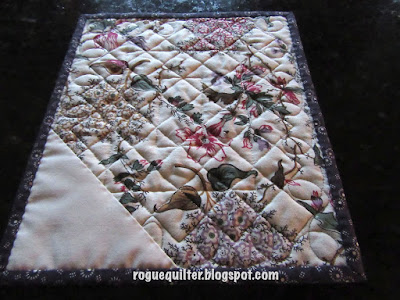 Just quilted some straight lines and simple loops in the border. 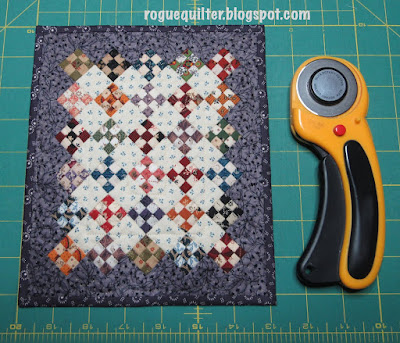 I finally finished messing with the trees in Sasquatch's forest. 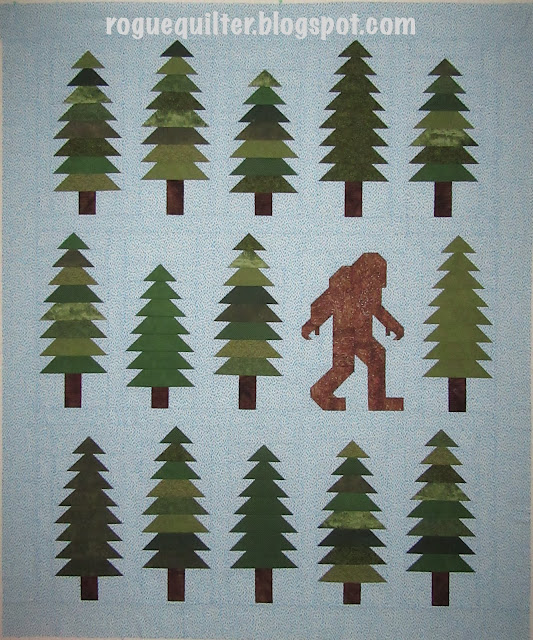 Thursday he went to the machine quilters. I won't be pushing any large quilts around under Gidget's needle for a while, yet, and I wanted this to get finished and to my oldest daughter's family. 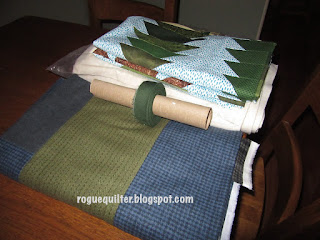 I pieced the back from chunks of blue and green flannels. I am having the machine quilter attach the binding, too, and then my Mom has offered to sew it down by hand.
My shoulder is being scoped this morning. Not sure how soon I will be back to blogging and quilting, but I will be quilting vicariously through the adventures of my blog friends! I'll be back as soon as I can.
In the meantime, enjoy this recent view from my sewing room window. Love those clouds. 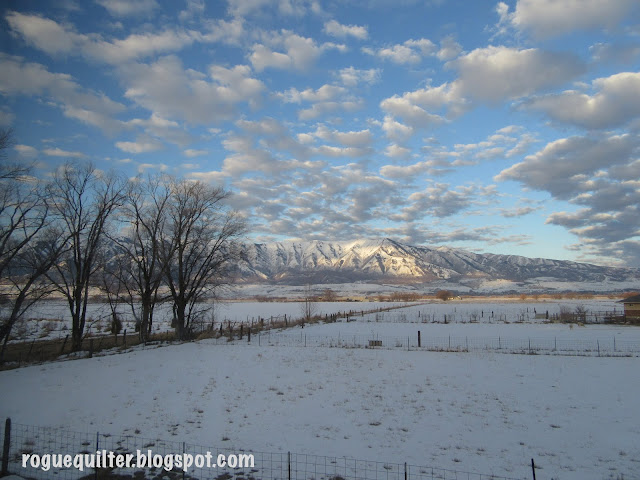 This is not one of the two projects that has a looming deadline, but it would not stop calling to me, and it is pretty apparent that I had no ability to resist.  Hopefully now it will leave me in peace and let me accomplish what needs to be done! 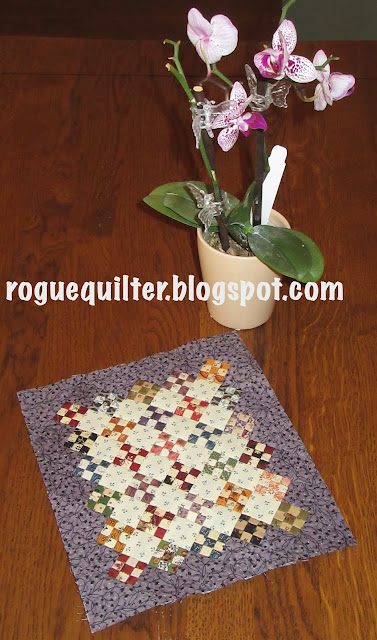 Since that is a mini orchid I realized that it didn't give a very good perspective on the finished size.
This should help. 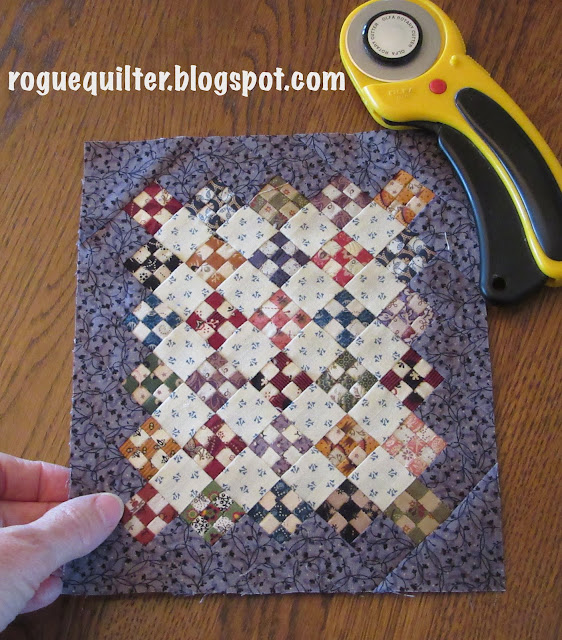 The 9-patches finish at 3/4". And talk about not making a dent in the scraps--this little thing seems to create more scraps than it uses!
Here it is by my Fairy Garden Party (that still needs quilting), made by shrinking down Bonnie Hunter's "Garden Party" design. 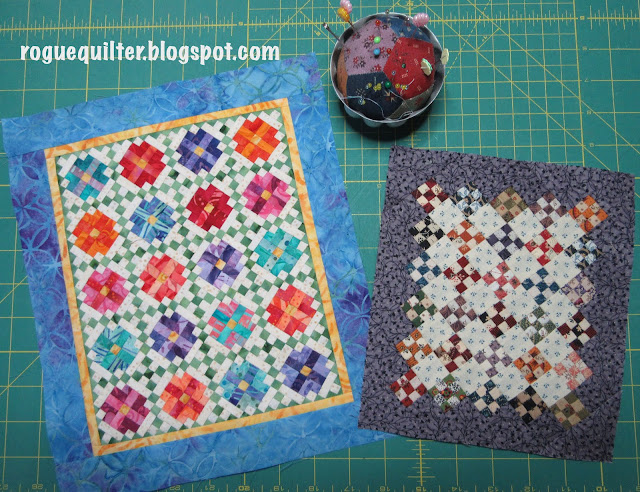 Aside from this distraction, I have been working on getting the rows of the Legendary: Sasquatch quilt sewn together. But when I stepped back from the design wall and skimmed over the block arrangement, I realized something wasn't right. 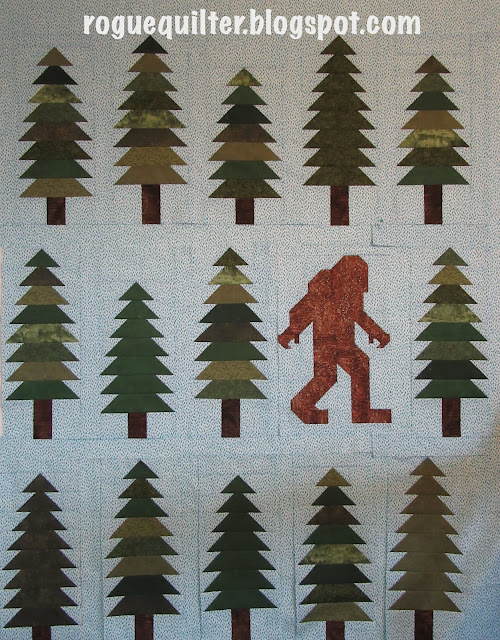 Sasquatch is walking on air! I know there are many legends about Sasquatch, but there is not one that I have heard involving air travel. I had to get his feet firmly on the ground. So I ripped off the little strips of background fabric from the top and bottom of the Sasquatch block and attached one wider strip to the top. Mission accomplished. 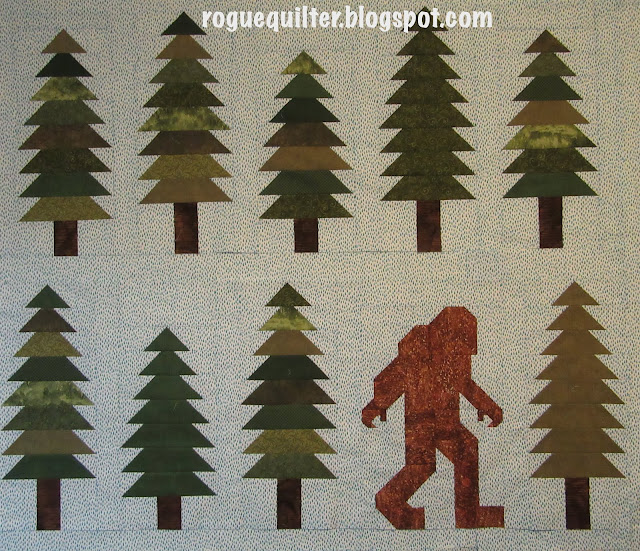 One more row of trees to sew together, and then I can do the sashing between rows. I am debating with myself about adding borders or not.
And for your amusement, when I mentioned on a previous post that I had found upside down raindrops and I was leaving them that way, this is what I had found. 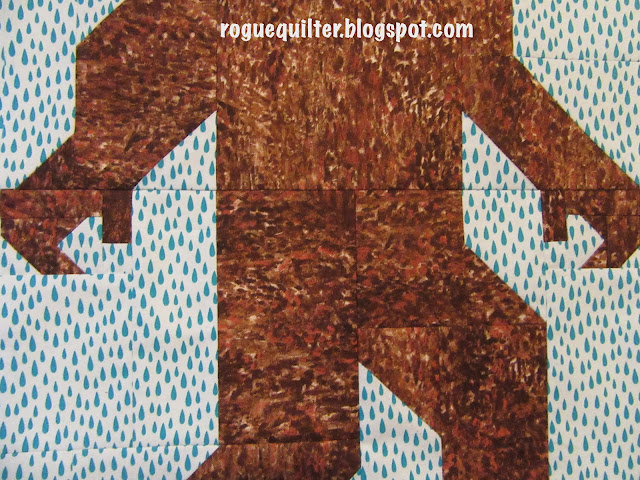 Look between Sasquatch's thumbs and fingers. I was not about to disassemble his hands to correct them.
I have been admiring lots of log cabin quilts online, and decided it was time to dig out these strips for half log cabin blocks. 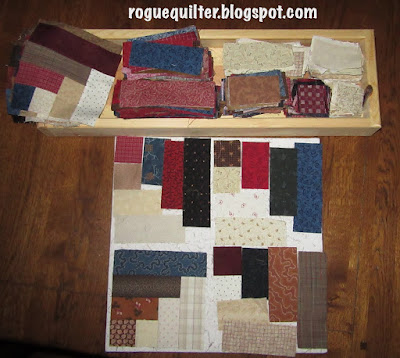 This was a project Karen Beigh passed along to me when she decided she didn't want to finish it. She had already assembled a few of the blocks. I have only added one to the pile, but I am anxious to make many more! I may even cut more "logs".

My thoughts and prayers have been with those that are facing severe weather. Hoping you are all safe and warm!
Until next time,
Janet O.

I love a simple 9-patch

When I was left with a pile of strips after cutting for a project, I just had to whip up a few 9-patch blocks. I have plenty of strips to make a bunch more, but these are what I stitched up during the news. In this photo I was auditioning a fabric for setting squares. I had first thought I would use a black print, but decided I wanted a sweeter look. 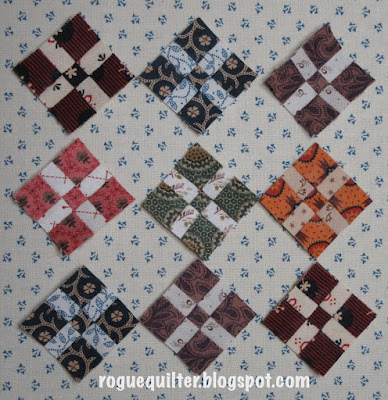 Did I forget to mention that the strips were under 1" wide and these blocks will finish at 3/4"? 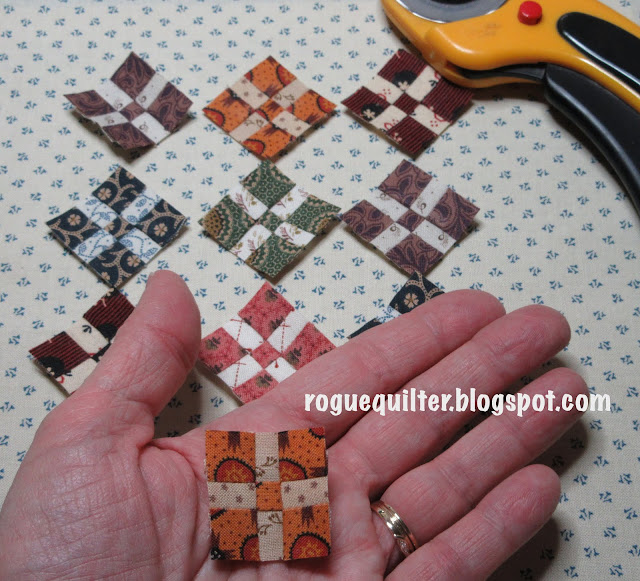 I have made many 9-patch blocks this size before, but it has been a while and it took me a couple of attempts to remember the techniques.

During the Olympics I spent a lot of time doing the stitching on this. 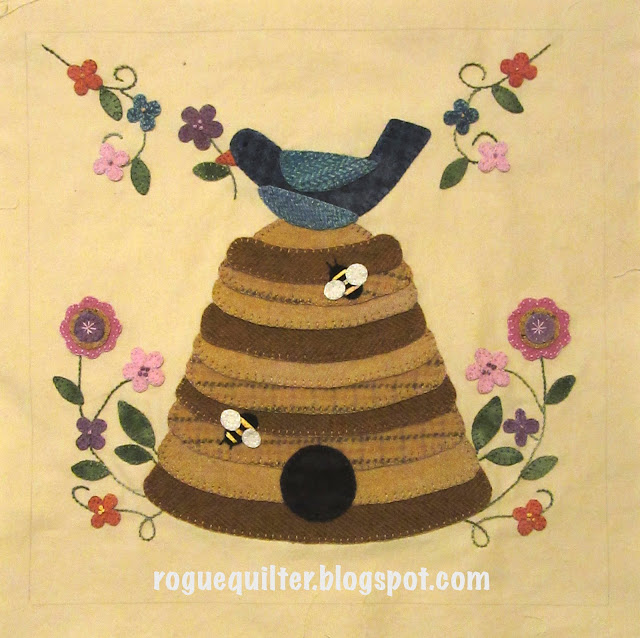 I'm not sure I want to border it the way the pattern shows, but I haven't yet come up with something that clicks for me. Currently it has a place on my design wall, reminding me that Spring is coming.

Wendy (theconstantquilter blog) invited us to join her in making a mini a month. Since I am inclined to do that anyway, I figured it would be fun to join in. My feathered star swap quilt ended up being my January finish, though I had intended this to be finished in January. 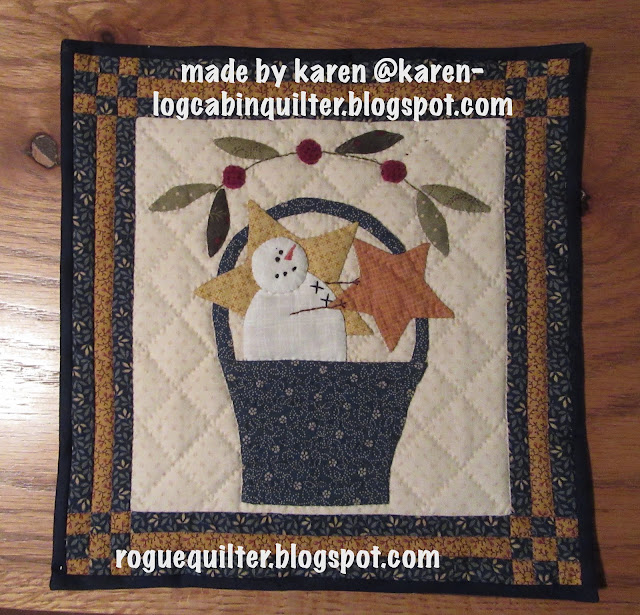 Instead, it is my February finish--almost. It looks all wonky because I haven't stitched the binding down on the back yet. The pins holding the folded binding down are distorting the quilt. Hopefully it will be completed very soon.
I have started my March mini, but it is a swap quilt that I won't show until the swap is completed.

It is time to get the sashing on Sasquatch. The last time I posted this quilt I said I still had something else I might do with the trees. 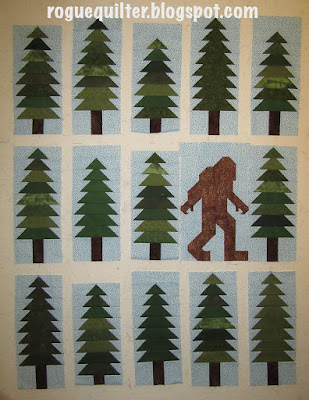 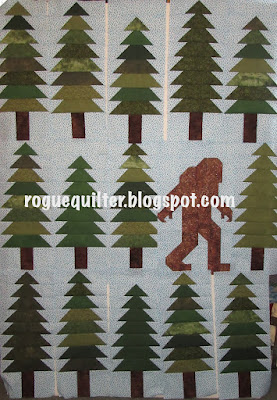 The photo on the left shows the trees as they were then. See how the trunks are all uniform in height? On the right I have shortened some of the trunks (I have just folded them under on the bottom while I decide if I like it or not). It adds one more factor of individuality to the trees, but I can't decide if it makes it look disjointed. Can a forest look disjointed? I know you have an opinion, so let me have it. :)

We are finally getting winter, and this was the scene one morning just before the sun came up over the mountains earlier this week.