A Tale of Two Templates

I have probably shared this photo here before but the story behind it is part of my post, so I will share it again. 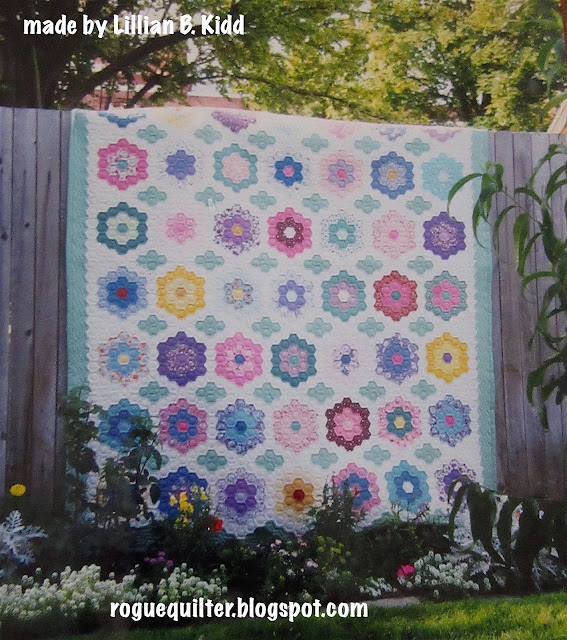 In 1998, while I was volunteering at a local heritage center, I became acquainted with the master quilter that did the quilting demonstrations at their Heritage Festivals. She was hand quilting a Grandmother's Flower Garden quilt that she had made using the English Paper Piecing method. Though I had been quilting for years, I was unfamiliar with this technique. She told me to come back the next day with some fabrics and hand stitching supplies and she would get me started.

I really didn't have much of a stash at this point, so I raided my mother's (which consisted of a whole lot of 1980s calico prints, it appears), promising to share with Mom what I learned. The next day, after receiving a plastic template and excellent instructions from my mentor, I proceeded to clumsily attempt assembling a flower.

Following my volunteer shift I went to my mother's and traced my template onto a plastic cottage cheese lid and cut it out for my mom to use. I shared with her what I had learned and away she went, while I plodded along, slowly making a flower now and then. The following year my Mom's quilt was completed (pictured above)--hand pieced, appliqued to the border, and hand quilted and bound. I was still making an occasional flower. 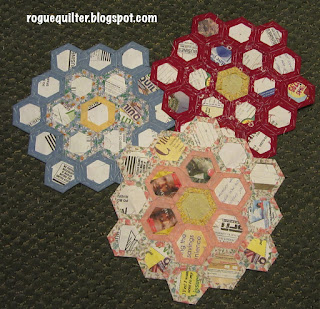 I don't know if the precut hexagon papers were even available then, but our local shop didn't carry them. We used our cottage cheese lid templates to trace and hand cut each cardstock hexagon from those annoying subscription postcards that fall out of every magazine you pick up. I didn't even want to think about how many I would eventually need to cut, but in my mind I was sure I was going to make at least 60 flowers. 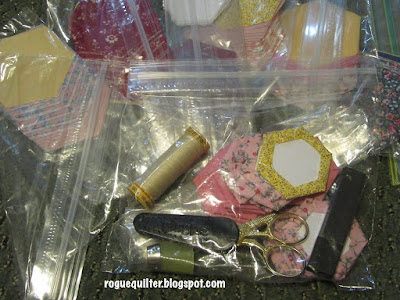 This was my "Lady in Waiting" project (as my teacher had so aptly called it). For years I kept a baggie in my purse with the necessary supplies to make one flower. I pulled it out while waiting for my children at piano lessons, orthodontist appointments, track meets, and basketball games. I made up dozens of little "kits" so that I could grab supplies for a new flower in a heartbeat, on those rare occasions when I actually finished one.

I am exceptionally slow at hand stitching, no matter how much practice I get, which has created many embarrassing experiences related to this project. I carried this around for so long that many times people who had seen me working on it years before, would see me pull it out and say, "Oh, are you making another one of those quilts?" I would have to explain that this was the same old one. But the most embarrassing was when I was helping check in quilts at the county fair once, about 8 years after I had started this quilt. As usual, I had my little baggie out on the table, stitching away when things got slow. Up came a young woman, carrying a Grandmother's Flower Garden quilt to enter in the fair. I knew her--she was the same age as my youngest son, and at this point they were both 18. I was marveling over her quilt--she had even hand quilted it. Then she explained that years ago she had seen me working on mine in the waiting room when she came for an orthodontist appointment. On their way home she told her mother she wanted to make what I was making. They went home and looked it up online and she figured it out and made it. And there I sat--still making flowers.

Since cutting out the hexagon papers was such a chore, my Mom saved a bunch of hers when she removed them from her quilt top, and she offered them to me. I was elated. The cutting of the hexagons was so tedious to me--actually the whole process was tedious to me, but I wanted the end product, so I kept plodding.

After I got a little over half of my flowers stitched (almost two decades later), I stalled. Just could not bring myself to whip one more stitch, or baste one more hexie. I decided that my quilt would not be as large as originally planned and just maybe, if I started assembling some of what I had made, it might spur me on to further progress. WRONG! 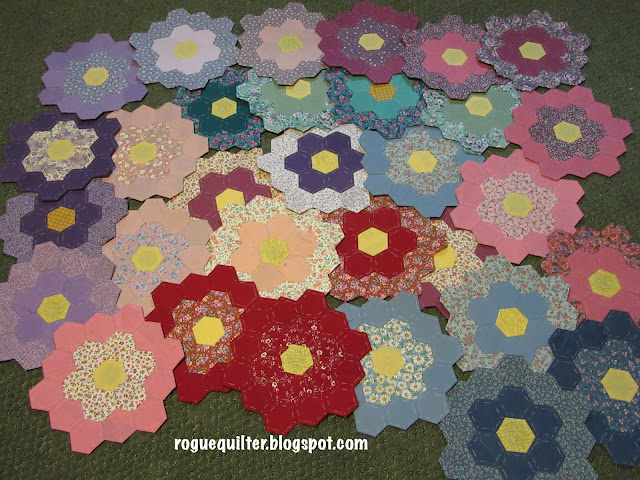 As I sorted through the flowers and tried to decide what type of "path" I wanted between them I discovered something extremely disheartening. My flowers were different sizes. The ones I had made using the papers I cut out were smaller than the ones made using the papers my mom had cut out. Depending on the angle of your pencil when you traced around the template, and whether you cut out on the line, or inside or outside the line, you could use the same template size, but end up with very different sizes of papers. 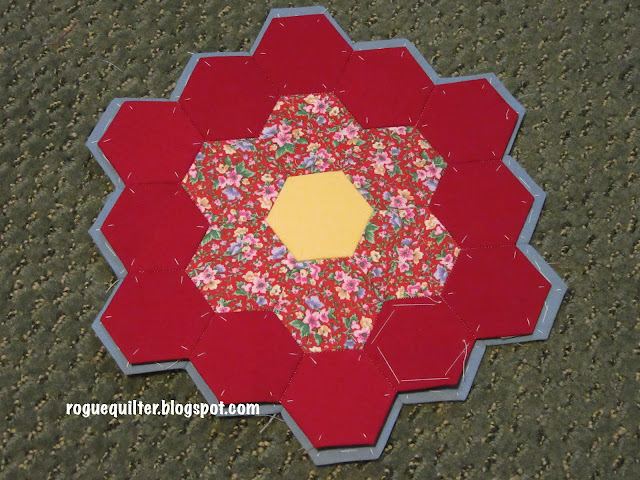 It was enough of a difference that I couldn't see how I could assemble a quilt top using both sizes. You can see above, I have one of the smaller blocks on top of one of the larger ones. Too much of a difference to just "ease" in. I was sick at the thought of all that work, and I couldn't put it together. I dumped everything into a box and shoved it into a dark place where I hoped to forget about it indefinitely.

Last year it started to haunt me. Do I just give it all away, or is there some way to save it? I finally came up with a plan and prepared what I needed, but hadn't done anything with it until now. On a short road trip last week I took it along (instead of my other hexie project that I struggle to work on), and I now have my first two blocks finished, and two more prepped and ready to stitch. Gotta love those calicoes. 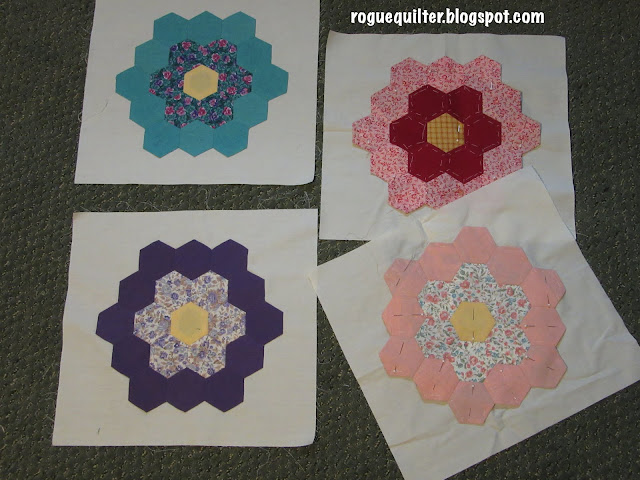 Though applique is not my favorite thing, I think I am far more likely to finish the quilt this way, than if I had to stitch more flowers. I have all the muslin cut and ready. It is so easy to pin on a flower and start stitching, but since it will just be a travel project, it isn't going to set any records getting finished. 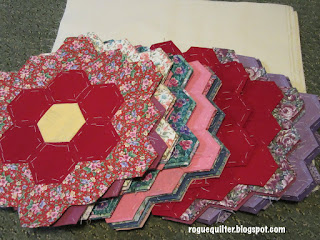 Do you have a 21 year old UFO? Surely someone out there has an older one--something you actually work on now and then. Tell me about it in the comments.

I am a little late to this party (as usual). A couple of months ago Sandy posted about a wonderful bundle of vintage Indigo fabrics she received. She invited three other bloggers to accept a parcel of them (that was a hard decision--not) and join her in a little challenge to make a mini quilt incorporating the indigo in some way. We were to post our finish yesterday. You can see the others at Sandy's blog, Wendy's blog and Barbara's blog. Each one is a delightful treasure. What fun this has been! 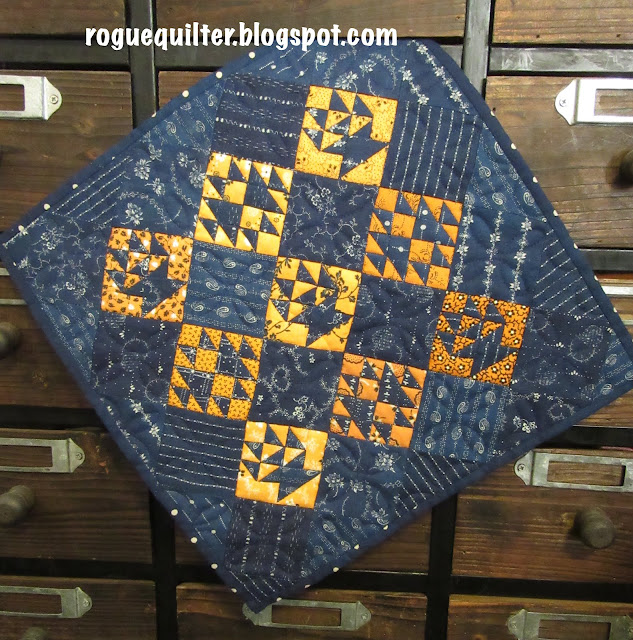 I had planned on doing just basket blocks with the setting squares in between to show off the indigo fabrics,  but when I made one of those little "Flying Geese" blocks as one of my rogue blocks for my Circa 1880 quilt, I knew I wanted to include them here somehow. 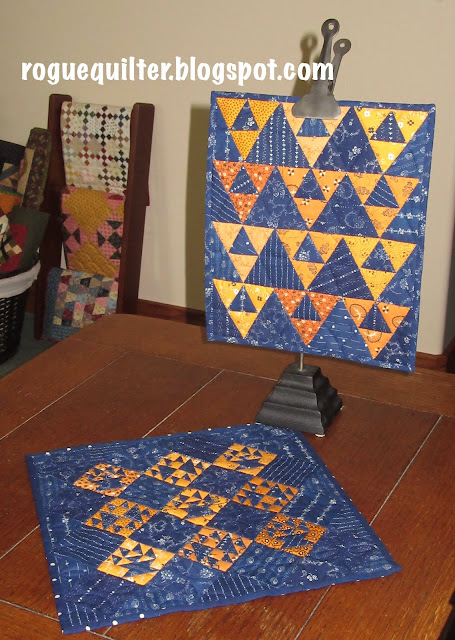 In April I had made a little "test quilt" to get a feel for working with the fabrics. I was really pleased with how the Pyramid quilt turned out, and actually had time to hand quilt it. Here are the two sister quilts together.
Much of the cheddar fabric in each of these quilts came from a bundle of "scraps" sent to me by Grace T. when she had made a wonderful indigo and cheddar quilt that had made me drool (I wanted to link to one of her posts, but she has a few cheddar/indigo projects and I couldn't decide which one. Just go browse her blog and enjoy.).

Had planned on doing hand quilting in the setting squares and triangles this week, but my dear Mom fell down her basement stairs on Wednesday--miraculously broken ribs and bruises were the results. I spent two days by her hospital bed and then another day at her side at my brother's, where she will be staying for now. She cannot be left alone at present. So the hand quilting became machine quilting instead, and I have just finished the binding this evening. 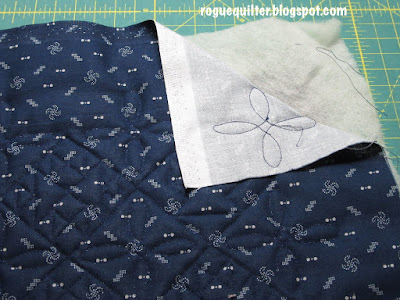 Quilting in the late hours is not conducive to clear thinking and careful work. I hate it when this happens.


Here you can see the size a little better--and the quilting. The blocks are 2" finished. 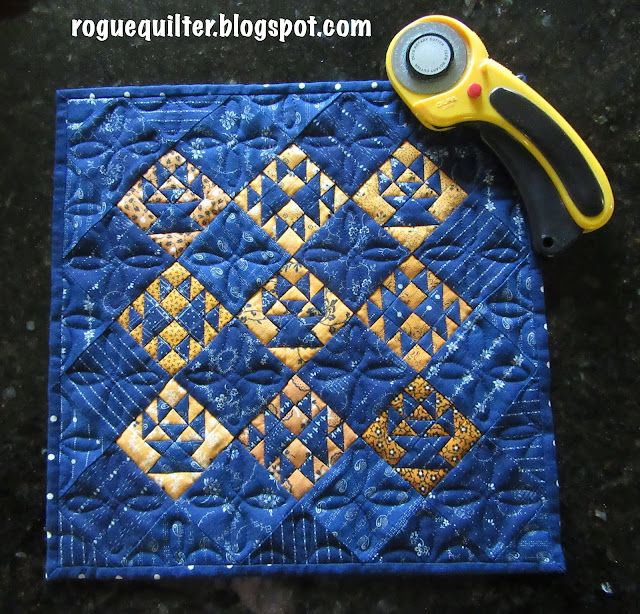 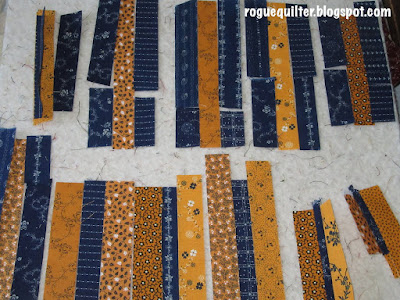 I have cut the long thin leftovers into strips to eventually make some 3/4" finished 9 patch blocks.

As you can tell, I kind of went crazy in the "cheddar & indigo" department. After seeing the quilts the other participants made, I can't decide if I want to use the tiny leftover bits to make a blue/white quilt, or blue and happy colors. I love them both. Maybe I can combine them somehow.

Thank you Sandy, for the indigo fabrics and the invitation to participate in your fun challenge.  And thank you Grace, for the cheddars that were so vital to my little quilts.

My blog anniversary drawing was an interesting experience. The first number I drew was someone who  had asked not to be in the drawing. I tried again. The second number was someone with no contact info. The third number was for Annie O. at Annie's Quilt Orts blog. When I replied to Annie's comment on my last post I asked her if she had ever won a drawing on my blog--because I have won one on hers. Well, now she has, and she has been notified.

Mom's fall has also kept me from getting to many blogs lately. I tend to just read a few that have posted most recently when I have a minute to check in. I hope to get back to you all soon.
Until next time,
Janet O.