Since I have been hopping on so many SALs lately, I thought I'd give an update. 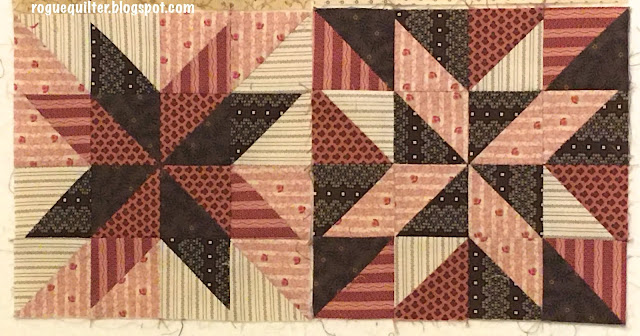 These two are Barbara Brackman's "Hands All Around". It is just one block a month, but I always make two, using the same fabrics in both, but switching up the placement. 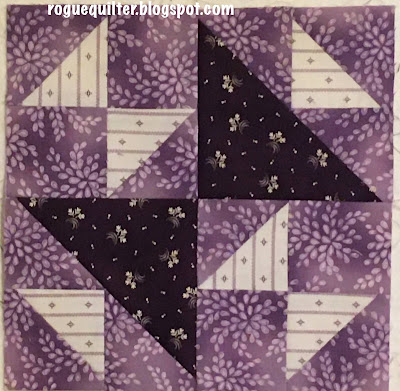 This is the Gay Bomers' "Heartfelt" block. It is a Block a Week program, but you may be instructed to make more than one of the block pattern any given week. This week only called for one. 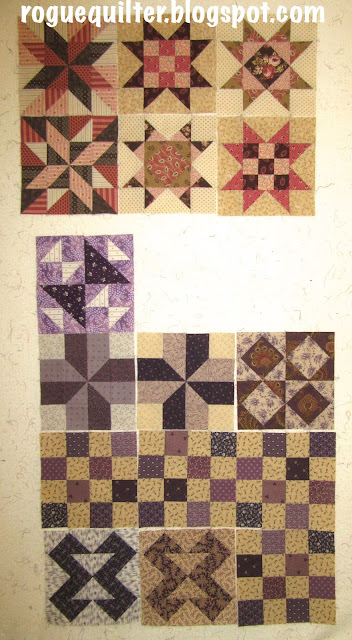 Amazingly, I have kept up with both so far. It hasn't escaped my notice that they are both using 8" blocks, so if I fall too far behind, I could combine them all into one quilt and call it "Heart and Hands". I've never made a pink/purple/brown quilt before. Hopefully I won't be doing it this year, either.  :)

I found a backing fabric I love for my "Curves" Challenge piece with Cecile at Patchwork Inspirations. 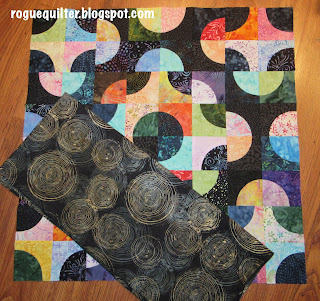 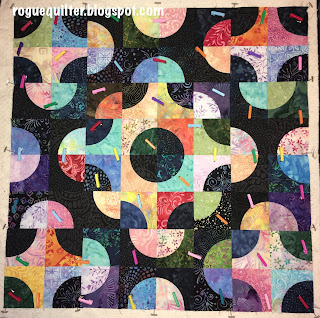 It is now basted and ready to quilt, but I keep changing my mind as to how to quilt it. Haven't struggled this much with a quilting design in a long time! 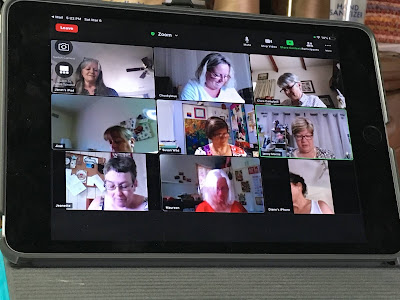 A week ago I caught a brief visit with Chookyblue and some of the other bloggers that enjoy Zoom sew-ins with her. Almost feels like the retreat I didn't get this year. This is my third time joining in and it is always a delight. As we chat it is interesting to see how different things are from one country to another--and also how alike.

Major rearranging going on in my sewing room in the coming week. Maybe I will even remember to take before/after photos.

And before I finish I should confess--I signed up for another Gay Bomers project! Her Little Blocks 365 was just too tempting!! I talked myself out of joining when sign-ups were about to close, and was proud that I had been so strong. Well, she had so many people beg requests for sign-ups to open back up, that she obliged. And I succumbed! Don't expect to see me making seven 3" foundation pieced blocks each week, but I couldn't pass up those patterns! And if you want to succumb too, sign-ups are open at that link until March 17! 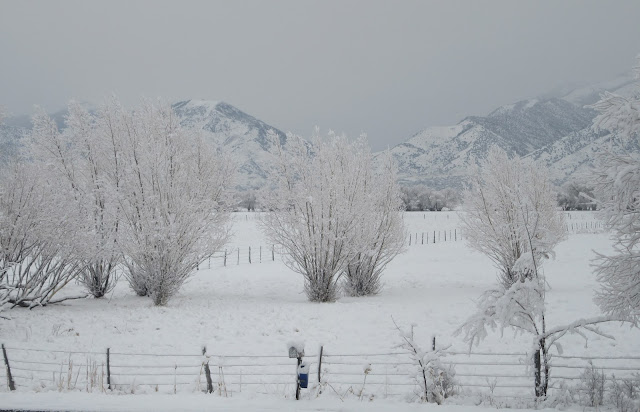 Earlier this week we woke up to 5" of snow, but it melted by the next day. In scenes like this I think the mountains and sky look like a fake backdrop in a low-budget movie.

It's fun to see your SAL projects. We overlap with the Hands All Around. Your blocks are so lovely! Your backing for your curves really is perfect. I have the same kwik clip pins. Have loved using those for many years!

Ohhh the last picture with snow is magic !!
I can't wait to admire your quilting on the curves quilt !! Thank you again for your participation !

nice blocks all around and the curves SAL piece is beautiful! i made a whole quilt in that variation once...scrappy! cherry trees ready to pop here...no more snow i'm guessing...

your snowy photo took my breath away. So gorgeous!
would made beautiful note cards.
Your blocks all look great. The purple one reminds me of Jill Reid. She loved purple.
Your backing for the curves quilt along is really great. What a perfect match.
Glad to hear you are enjoying zoom meetings

Love your blocks and the snow—as long as it stays in your neighborhood!

Just a thought--what about quilting your curves quilt from the back and roughly using the pattern on the back as a quilting design? I think it would look great. Just my two cents. Whatever you choose will be great.

Great blocks...you will have great quilts when you finish.

Another wonderful post. You got me with the 365 blocks.

I'm loving your Hands all Around blocks, pinks and browns are so wonderful together. Hoping to join in that BOM if time and energy permit later this year. You found the perfect for your curves quilt! Your brief day of snowy mountainscape is beautiful but we're hoping for spring green very soon, as we watch the skies darken and the flurries begin again this afternoon.

I am beyond impressed that you've not only joined several quilt alongs but that you are keeping up. I've been very tempted to join the 3" daily quilt. I have always loved their quilts. Your having joined may push me over the edge to join!

Love what you've done and I think having both projects be 8" is a great fall-back, just in case you don't finish. Perish the thought!

That snow? Just gorgeous! I like Barb's idea to make note-cards out of that scene.

I always love to see photos of the countryside around you Janet as it is so stunning. That snow is amazing & wonderful to me but probably not so wonderful if you live in it. Your SAL's are all beautiful - I especially love the pink & brown combinations.

P.S Yes PLEASE to pictures of your sewing room before & after!!!

Your projects are lovely! I’ve been watching some of the “Little Blocks 365” projects on Instagram and have been so tempted to join, but proud of myself for holding off. Now I feel my resolve weakening again 😐......need to stay focused on the several projects I already have going - need to say this over and over......🙂

Well this is a strange turn of events! You are succumbing to the quilt alongs and I am saying 'no' and staying strong?!? What is going on here?! LOL The little blocks project was really hard to resist, but I haven't finished my 150 Canadian Women yet and I really want to, so I am being stern with myself. I can hardly believe it!

You maybe working on multiple SAL but I can tell you're having a good time. I love the purples you've chosen for the Heartfelt blocks. Love the fabric for the backing of your curved piece. Perfect. How fun to be part of an international zoom meeting all in the comfort of your home.

I was going to comment about how beautiful your snow photo is -- and then I read your comment and started laughing. The sky is very grey!
The stripes in the first blocks add so much interest. And the change in color placement sure makes a difference what stands out.
The backing you chose for curves is perfect. Will you hand or machine quilt it?
I think you're doing really well keeping up with all the sew-alongs! Good for you!

I love the colorways of both your BOM and BOW! Hey ... I wanna zoom sew with you! That would be so (sew) much FUN! My Nook needs a LOT of attention before I stitch/Zoom from there. Ha! Love those late winter snows! :)

Oh my! I am so impressed with all your progress. I was hoping you would sign up for Gay's little 365 blocks. They are so you! I am never tempted to do paper piecing but I sure do love watching you make delightful little blocks. That backing fabric for your curves is absolutely perfect. Can't wait to see what you do for the quilting. Your snow is like a fairy wonderland. It seems like we are getting less and less snow here every year, but we are making up for it in wind!

Oh, and I am so happy that you got to chat with Chooky! I still hope to be able to chime in sometime soon!

I like the idea of a Hearts and Hands quilt. You have made a lot of great progress. Your snow pic is beautiful!

Good work keeping up with all the sew-alongside, Janet. I wouldn’t mind seeing the 8” blocks all in one quilt. I just looked at the 360 blocks. Omg! I’d say they’re right up your alley!

Oh, Janet, I ALSO signed up for those tiny foundation-pieced blocks. I don't know WHAT I was thinking! I printed out the first four or five sets but haven't gone farther than that. Really, I must have been channelling you . . . .

Glad to see progress on your BOM and BOW. I CAN RESIST! I don't do paper piecing, it's an easy choice. I'll be watching to see the before and after photos of your sewing room.

You certainly stay busy. I love how the pink and brown blocks are turning out. I think I have Zoom phobia. But, I'm glad you were able to connect and enjoyed yourself in Chooky's online retreat. I checked out the 365 blocks with Gaye. I guess the time just isn't right to jump into a big SAL. They sure are cute. Love the backing you have chosen, it's perfect.

It must be such a good feeling to be on track with all your projects! Everything looks great. That's the perfect backing for Curves Challenge. I'll be thinking of you making all those 3" blocks--can't wait to see them!

Nice to see you jumping into new projects Janet, and what's more getting the time to make the blocks - here's hoping that you are able to carry on in the same vein. I'm hoping to have the chance to zoom again another time - the timings haven't worked so well for me lately!

WOW!! I am so happy to see you are getting some quality sewing done and keeping up with your existing projects!! Can't say the same for myself!! I'll bet the decision on how to quilt your Curves quilt is because that cute little quilt is sooooo outside your box!! You'll come up with something great, I'm sure!! And girlfriend, I miss you too!! LOTS!!

So glad to see you sewing! I love your blocks and that backing fabric is great!!

So you all just get on Zoom and sew together?